An earthquake scientist said of the recent 2 big California earthquakes, “… the M6.4 was a foreshock. This was a M7.1 on the same fault … part of the same sequence.” She added it will not trigger another large earthquake outside the Ridgecrest, California, area. 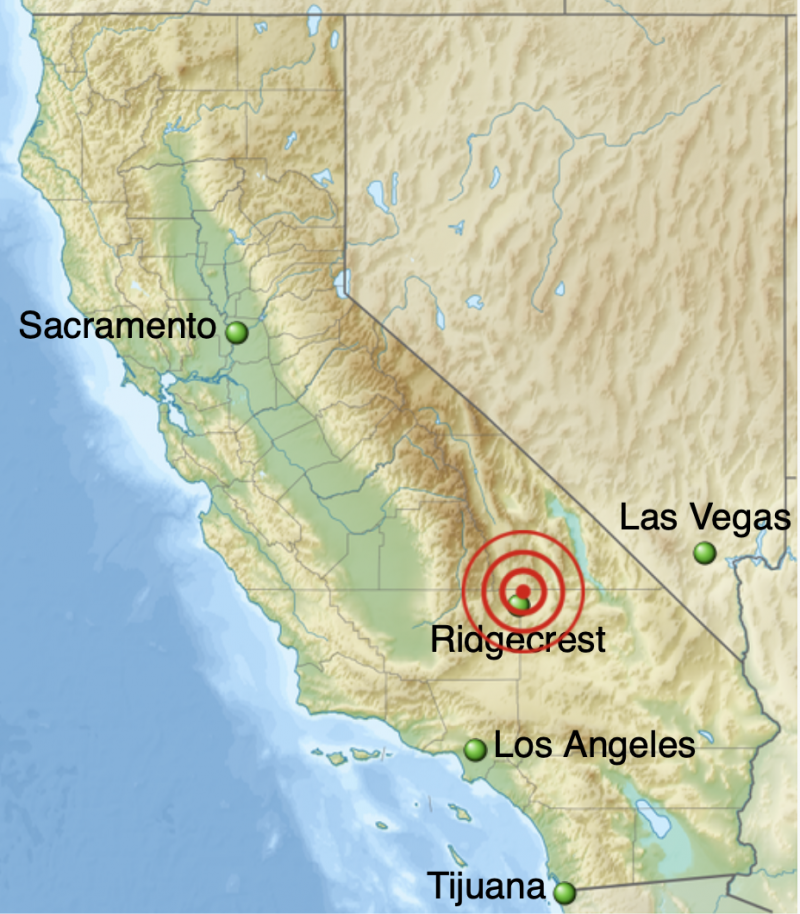 The second large earthquake in two days shook the Ridgecrest area of eastern California – in the Mojave desert – last night. It took place approximately 34 hours after and 7 miles (11 km) northwest of a 6.4-magnitude foreshock, which happened on July 4 in a nearby remote area of California’s San Bernardino County. The 7.1-magnitude earthquake took place at 03:19 UTC on July 6, 2019 (8:19 p.m. Pacific Daylight Time on July 5; translate UTC to your time). The epicenter of the quake was 10.5 miles (17 km) north-northeast of Ridgecrest, California, southwest of Searles Valley and not far from Death Valley National Park. Scientists are referring to this earthquake series (which also consists of numerous minor quakes) as the Searles sequence. The sequence includes two other magnitude 5+ earthquakes, one of which occurred 20 seconds before the 7.1-magnitude event.

Ridgecrest is a small city in Kern County, California, with a population of 27,616 at the 2010 census. Thus the 7.1-magnitude quake took place in a low-population region. Ridgecrest is approximately 82 miles (132 km) from the Lancaster/Palmdale area, 110 miles (177 km) from Bakersfield, and 120 miles (193 km) from San Bernardino, the three nearest major urban centers.

So the M6.4 was a foreshock. This was a M7.1 on the same fault as has been producing the Searles Valley sequence. This is part of the same sequence –

California earthquake scientist Lucy Jones of the U.S. Geological Survey (USGS) – who frequently serves as a public voice for science on the subject of California earthquakes – said that the 7.1-magnitude quake “probably” would not trigger more quakes or larger quakes outside the Ridgecrest, California, area.

Dr. Lucy Jones, seismologist at California Institute of Technology and a former science adviser at the Geological Survey, says latest 7.1 magnitude earthquake will not trigger another earthquake outside Ridgecrest, CA, region. pic.twitter.com/5NX56ZOKD6

On the other hand, Jones pointed out to the LA Times that the 7.1-magnitude quake occurred on the same fault system as the 6.4 temblor and was quoted as saying:

This happened at the end of the zone that moved previously The fault is growing.

Given its size, she said, it’s likely to be followed by more shaking that will be felt in Los Angeles, adding:

The largest aftershock, on average, to a 7.1 would be a magnitude 6.

Another quake on the order of the earlier, 6.4-magnitude quake “would not be surprising to anybody,” Jones said. Or it could be even bigger. The LA Times also reported:

Jones said she could not recall a pattern of earthquakes in California where a 6.4 foreshock was followed by a 7.1 event, only to be followed by an even bigger quake. But that doesn’t mean it can’t happen, she cautioned. 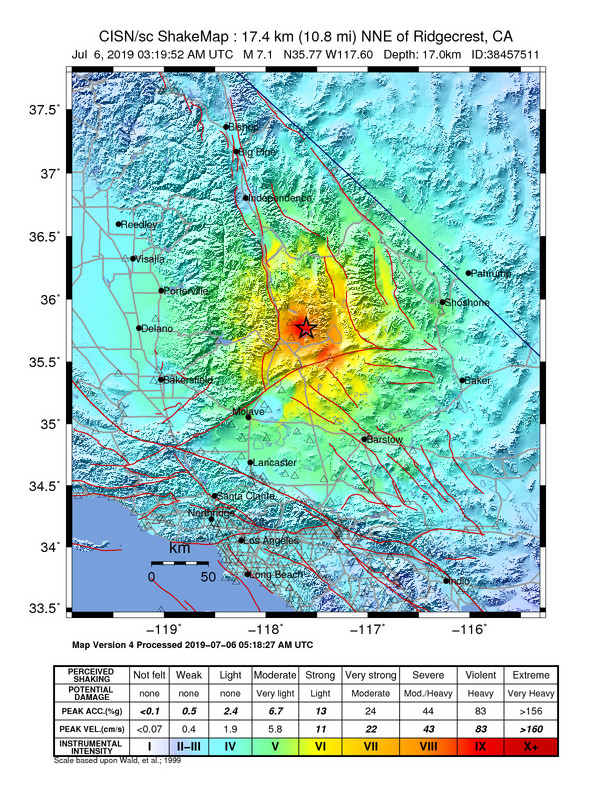 ShakeMap for the 7.1-magnitude earthquake near Ridgecrest, CA, via USGS.

The July 6th, 2019, 03:19 UTC (July 5th 20:19 locally) Mw 7.1 earthquake in eastern California, southwest of Searles Valley, occurred as the result of shallow strike slip faulting in the crust of the North American plate … At the location of this earthquake, approximately 150 km [93 mi] northeast of San Andreas Fault – the major plate boundary in the region – the Pacific plate moves to the northwest with respect to the North America plate at a rate of approximately 48 mm/yr [almost 2 inches/yr]. The location of the earthquake falls within the Eastern California shear zone, a region of distributed faulting associated with motion across the Pacific-North America plate boundary, and an area of high seismic hazard.

More detailed studies will be required to precisely identify the causative fault associated with this event, though seismic activity over the past 2 days has been occurring on two conjugate fault structures in the Airport Lake Fault Zone …

This region of eastern California has hosted numerous moderate sized earthquakes. Over the past 40 years, prior to the July 4th event, 8 other M5+ earthquakes have occurred within 50 km [30 mi] of the July 6th, 2019, earthquake. The largest of these was a M 5.8 event on September 20, 1995, just 3 km [1.9 mi] to the west of today’s event, which was felt strongly in the China Lake-Ridgecrest area, and more broadly from Los Angeles to Las Vegas. 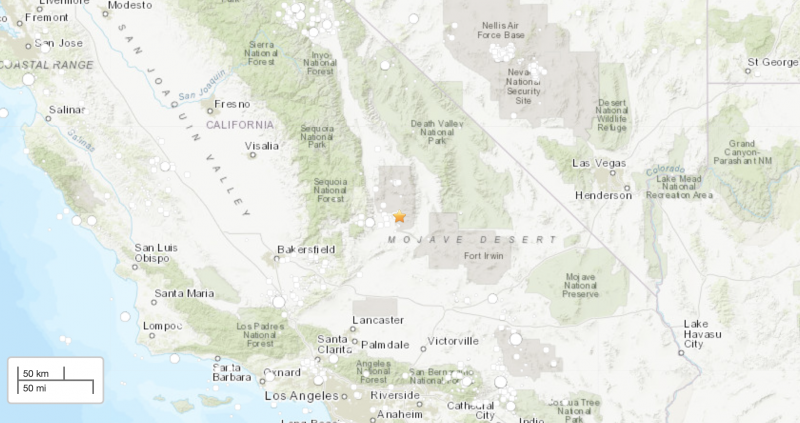 The magnitude 7.1 earthquake on July 6, 2019, took place 10.5 miles (17 km) north-northeast of Ridgecrest, California, in the Mojave desert. Read more about nearby places from USGS.

Bottom line: A 7.1-magnitude earthquake took place on July 5, 2019, at 8:19 p.m. Pacific Daylight Time (July 6 at 03:19 UTC). It took place near Ridgecrest, California (population 27,616 at the 2010 census), in the Mojave Desert. Earthquake scientist Lucy Jones said, “… the M6.4 was a foreshock. This was a M7.1 on the same fault.” Building fires reported in Ridgecrest. Effects felt across much of Southern California, parts of Arizona and Nevada, as far north as the San Francisco Bay Area, and as far south as Baja California, Mexico.