On tall ice structures high in the Chilean Andes, researchers found algae growing on snow. They don’t entirely understand how the algae are able to bloom. 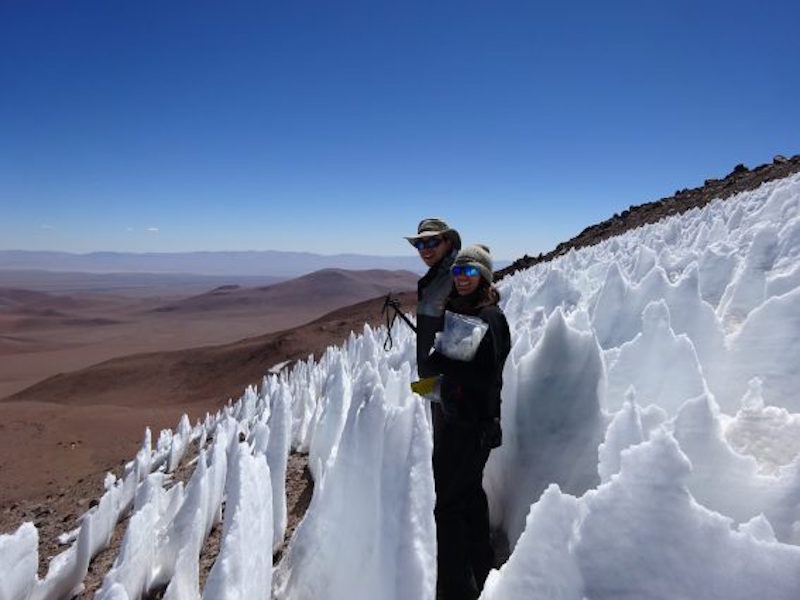 These elongated, thin blades of hardened snow or ice are called nieves penitentes. They’re found closely spaced and pointing towards the general direction of the sun. Recently, researchers were surprised to find patches of red ice on the sides of some of the penitentes, which turned out to be a unique snow algae. Image via Steven Schmidt/GlacierHub.

This article – written by Elza Bouhassira – is republished with permission from GlacierHub.

A new study found snow algae on nieves penitentes [Spanish for “penitent-shaped snows”] at high elevations in the Chilean Andes.

Steven Schmidt is a University of Colorado, Boulder professor, specializing in microbial ecology. He’s one of the paper’s authors. He told GlacierHub.

The expedition was an epic and very arduous trip to a remote mountain. The original goal was to sample a lake below a remnant glacier high on the mountain, but the lake was frozen solid and the winds were horrendous, so we worked lower on the mountain and carried out the first-ever search for life on nieves penitentes.

Nieves penitentes form when windblown snow banks build up and melt due to a combination of high radiation, low humidity, and dry winds. The snow melts into the pinnacle-shape which earned penitentes their name: they are said to resemble monks in white robes paying penance. Penitentes are important to the dry, high-altitude areas where they’re found, because they can be a periodic source of meltwater for the rocky ground. 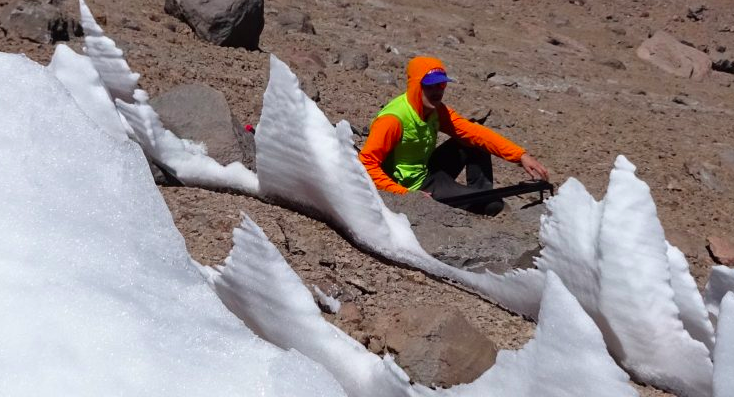 Nieves penitentes at the research site. Image via Steven Schmidt/GlacierHub.

Schmidt described how the researchers were surprised to find patches of red ice on the sides of some of the penitentes. He told GlacierHub:

We took samples from these patches and later found that they contained some unique snow algae and a thriving community of other microbes.

The study was published the peer-reviewed journal Arctic, Antarctic, and Alpine Research on June 12, 2019.

Matthew Davey, a plant and algal physiologist at Cambridge University, who was not involved in the study, told GlacierHub:

Snow algae are microscopic plant-like organisms that are able to live on and within the snowpack.

Snow algae is also known as watermelon snow because of the color it creates on the surface of snow and ice. The snow’s watermelon hue is caused by an abundance of natural reddish pigments called carotenoids which also shield the algae from ultraviolet light, drought, and cold, contributing to their ability to survive in extreme environments. 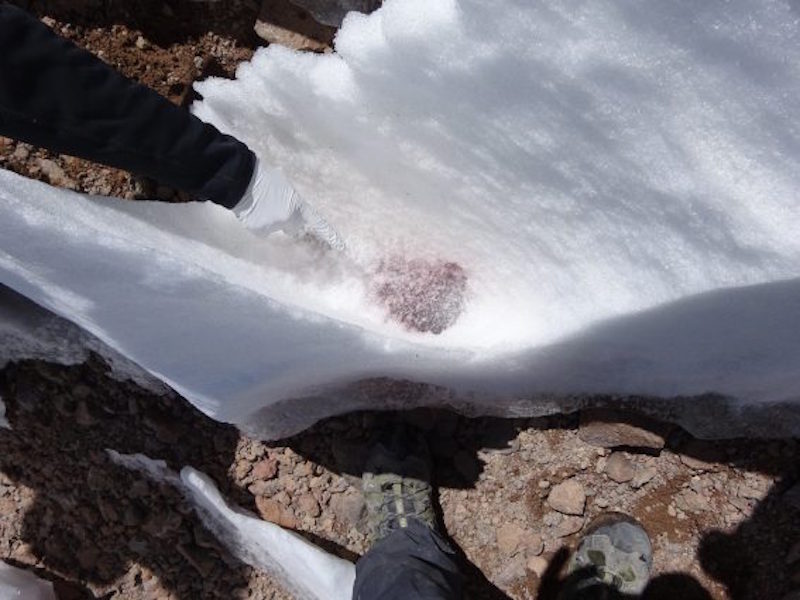 Researchers don’t entirely understand how the algae bloom in high density given the low temperatures and high light levels they live with. Davey explained:

There is evidence that they can be deposited by wind, they could already be in the rock surface from previous years or they could be brought by animals. Once the snow has melted slightly, so there is liquid water, the algae can reproduce and bloom within days or weeks. During this time they can start green, then turn red, or stay green or stay red – it depends on the algal species.

The samples of snow algae were collected from penitentes on the Chilean side of Volcán Llullaillaco. It is the second tallest active volcano in the world after Ojos del Salado and it sits on Chile’s border with Argentina. The penitentes were between 1-1.5 meters tall (about 39 to 60 inches tall). The presence of snow algae on penitentes is notable because the algae can change the albedo of ice and increase melting rates. 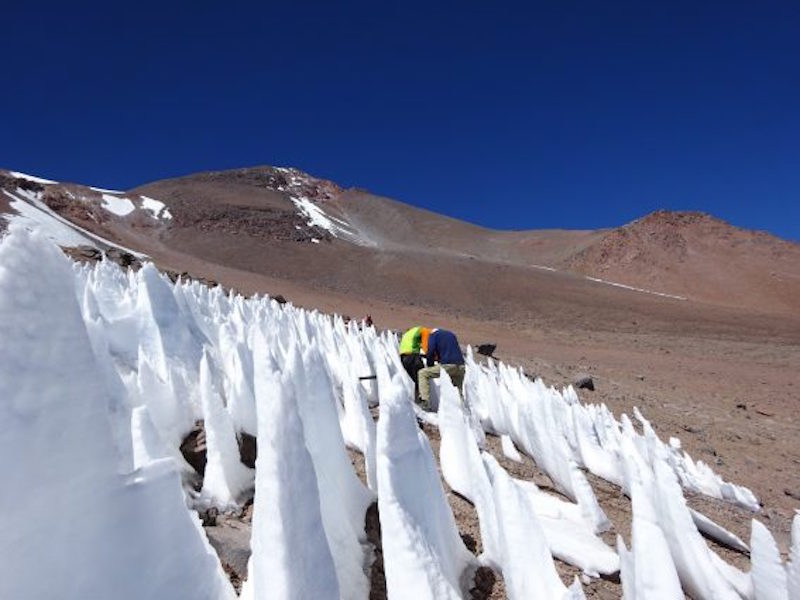 The study describes the environment that the samples were collected in as “perhaps the best earthly analog for surface and near-surface soils on Mars,” opening the door for implications in astrobiological research. The high elevation where the snow algae was found is responsible for the conditions that create an almost extraterrestrial environment; there are very high levels of ultraviolet radiation, intense daily freeze-thaw cycles, and one of the driest climates on the planet.

Penitente-like structures were recently found on Pluto and possibly on Europa, one of Jupiter’s moons. In the context of these discoveries, Schmidt said that “penitentes and the harsh environment that surrounds them provide a new terrestrial analog for astrobiological studies of life beyond Earth.” The finding in the new study that “penitentes are oases of life in the otherwise barren expanses” pushes the boundaries of the current understanding of the cold-dry limits of life. 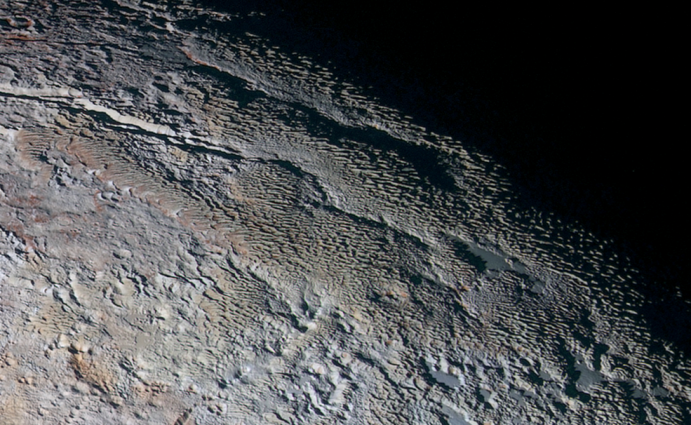 The surface of Pluto’s Tartarus Dorsa region, where penitentes were also found. Image via NASA/JHUAPL/SwRI.

Our study shows how no matter how challenging the environmental conditions, life finds a way when there is availability of liquid water.

Source: Nieves penitentes are a new habitat for snow algae in one of the most extreme high-elevation environments on Earth