We are entering a mass extinction that threatens humanity’s existence, says a new study

Earth’s species are disappearing faster than at any time since the dinosaurs’ demise, some 15 to 100 times faster than the normal rate between past mass extinctions.

That’s according to a new study by a team of scientists from Stanford, Berkeley, Princeton, University of Florida and Universidad Autónoma de México, published in the journal Science Advances on June 19, 2015. The scientists call for fast action to conserve threatened species, populations and habitat, but warn that the window of opportunity is rapidly closing.

If it is allowed to continue, life would take many millions of years to recover, and our species itself would likely disappear early on.

There is general agreement among scientists that extinction rates have reached levels unparalleled since the dinosaurs died out 66 million years ago. However, some have challenged the theory, believing earlier estimates rested on assumptions that overestimated the crisis.

Using fossil records and extinction counts from a range of records, the researchers compared a highly conservative estimate of current extinctions with a background rate estimate twice as high as those widely used in previous analyses.

We emphasize that our calculations very likely underestimate the severity of the extinction crisis, because our aim was to place a realistic lower bound on humanity’s impact on biodiversity.

Study co-author Paul Ehrlich is the Bing Professor of Population Studies in biology and a senior fellow at the Stanford Woods Institute for the Environment. Ehrlich said:

[The study] shows without any significant doubt that we are now entering the sixth great mass extinction event. 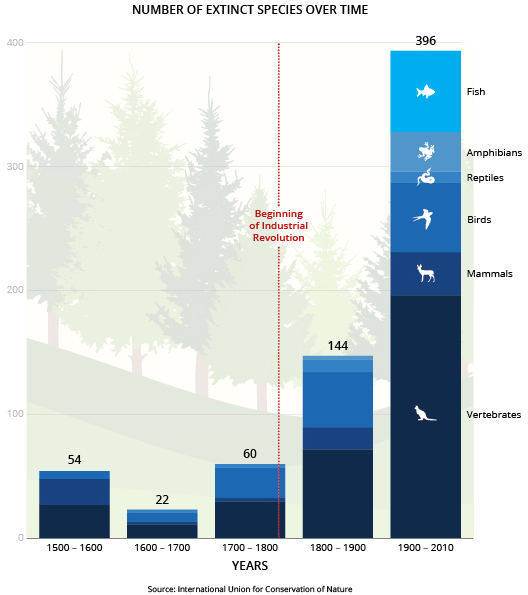 To history’s steady drumbeat, a human population growing in numbers, per capita consumption and economic inequity has altered or destroyed natural habitats. The long list of impacts includes:

Now, the specter of extinction hangs over about 41 percent of all amphibian species and 26 percent of all mammals, according to the International Union for Conservation of Nature, which maintains an authoritative list of threatened and extinct species.

There are examples of species all over the world that are essentially the walking dead.

As species disappear, so do crucial ecosystem services such as honeybees’ crop pollination and wetlands’ water purification. At the current rate of species loss, people will lose many biodiversity benefits within three generations, the study’s authors write. Ehrlich said:

We are sawing off the limb that we are sitting on.

Despite the gloomy outlook, there is a meaningful way forward, according to the study’s authors:

Bottom line: A study in the June 19, 2015 issue of Science Advances says that Earth’s species are disappearing faster than at any time since the dinosaurs’ demise, up to about 100 times faster than the normal rate. We are entering a mass extinction that threatens humanity’s existence, according to the researchers.