The most complete genome yet for a truly unique marsupial – the Tasmanian tiger – suggests that, if the tigers hadn’t been hunted to extinction, they might still have struggled to survive. 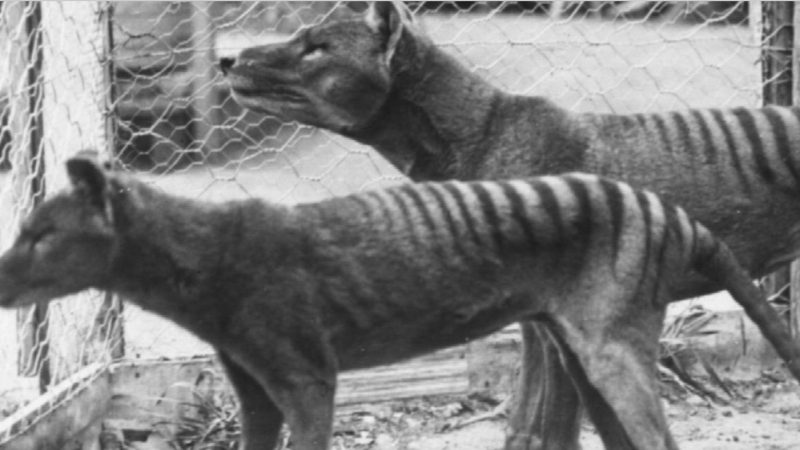 Tasmanian tigers were the largest known carnivorous marsupial of modern times, about the size of a medium-to-large dog. They’re believed to have gone extinct in the 20th century. Photo via the Tasmanian Museum and Art Gallery.

By Nerissa Hannink, University of Melbourne. First published on December 12, 2017 in the UM’s Science Matters.

Floating in a small jar of alcohol sits one of Australia’s rarest specimens.

As the animal became rarer, museums everywhere clambered to have a thylacine on show, and they are now its last refuge after being hunted to extinction in 1936.

Using techniques never imagined when the last thylacine died in Hobart Zoo last century, a team led by the University of Melbourne have now sequenced the genome of the Tasmanian tiger (Thylacinus cynocephalus), making it one of the most complete genetic blueprints for an extinct animal. Tasmanian tigers had abdominal pouches, like kangaroos. They were native to continental Australia, Tasmania and New Guinea. Genome sequencing has now been revealed the species had low genetic diversity. Photo via the Tasmanian Museum and Art Gallery.

For project leader Andrew Pask, the thylacine is his labor of love. Over 10 years ago, he and an international team first resurrected a Tasmanian tiger gene from preserved pelt, but the DNA was too fragmented to obtain the whole genome.

So, they searched museums’ world-wide databases and found specimen C5757 in Museums Victoria’s collection – a young thylacine pup. Because the Tasmanian tiger was a marsupial, which are mammals with a pouch, this pup specimen could be preserved in its entirety, allowing the research team to extract DNA and use cutting-edge techniques to sequence the thylacine genome.

Andrew Pask said the results provide the first full genetic blueprint of the largest Australian apex predator to survive into the modern era. He said:

The genome allows us to confirm the thylacine’s place in the evolutionary tree. The Tasmanian tiger belongs in a sister lineage to the Dasyuridae, the family which includes the Tasmanian Devil and the dunnart.

Importantly, the genome has also revealed the poor genetic health, or low genetic diversity, the thylacine experienced before it was over-hunted. The Tasmanian Devil is now also facing a ‘genetic bottleneck’ which is a likely result of their genetic isolation from mainland Australia for the last 10,000 to 13,000 years.

However, the genome analysis suggests that both animals were experiencing low genetic diversity before they became isolated on Tasmania. This, in turn, suggests that Tasmanian tigers may have faced similar environmental problems to the Devils, had they survived, such as a difficulty overcoming disease. Pask commented:

Our hope is that there is a lot the thylacine can tell us about the genetic basis of extinction to help other species. 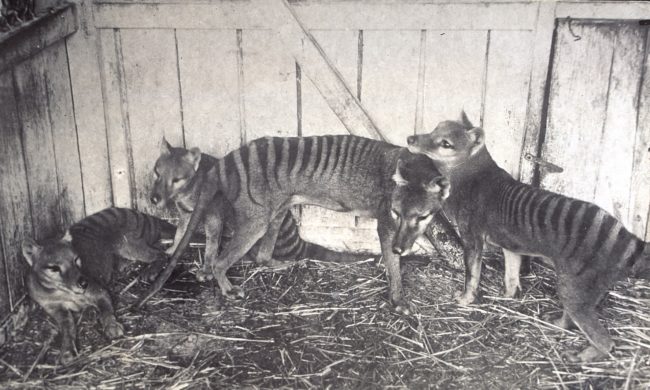 The last Tasmanian tiger died in captivity in 1936. Photo via the Tasmanian Museum and Art Gallery.

As this genome is one of the most complete for an extinct species, it is technically the first step to ‘bringing the thylacine back,’ but we are still a long way off that possibility.

We would still need to develop a marsupial animal model to host the thylacine genome, like work conducted to include mammoth genes in the modern elephant. But knowing the Tasmanian tiger was facing limited genetic diversity before extinction means it would still have struggled similarly to the Tasmanian Devil if it had survived.

The genome provides other important new insights into the biology of this truly unique marsupial.

The thylacine is often described as a long dog with stripes, because it had a long, stiff tail and a big head. A fully grown thylacine could measure 71 inches (180 cm) from the tip of the nose to the tip of the tail and stand 23 inches (58 cm) high.

Its thick black stripes extended from the shoulders to the base of the tail.
Like the dingo, the thylacine was a very quiet animal. But they were reported to be relentless hunters who pursed their prey until it was exhausted.

Scientists consider the thylacine and the dingo as one of the best examples of convergent evolution, the process whereby organisms that are not closely related independently evolve to look the same as a result of having to adapt to similar environments or ecological niches.

It appears that because of their hunting technique and diet of fresh meat, the skulls and body shapes of dingos and Tasmanian tigers became extremely similar.

Working with Christy Hipsley from Museums Victoria, the team analysed the characteristics of the thylacine’s skull – such as eye, jaw and snout shape. Hipsley said:

We found the Tasmanian tiger had a more similar skull shape to the red fox and gray wolf than to its closest relatives.

The fact these groups have not shared a common ancestor since the Jurassic period makes this an astounding example of convergence between distantly related species.

Andrew Pask added that the thylacine looked almost like a dingo with a pouch. He said:

When we looked at the basis for this convergent evolution, we found it wasn’t actually the genes that produced the same skull and body shape, but the control regions around them that turn genes ‘on and off’ at different stages of growth.

In this case, it seems the need to hunt led the thylacine to transform its appearance into one similar to the wolf over the past 160 million years.

Scientists can now start to understand the genetics that have driven this process and uncover more about the biology of this unique marsupial apex predator.

The research team also included scientists from the University of Munster, Museums Victoria, University of Adelaide and University of Connecticut. Some of the work was funded by the Research @ Melbourne Accelerator Program. 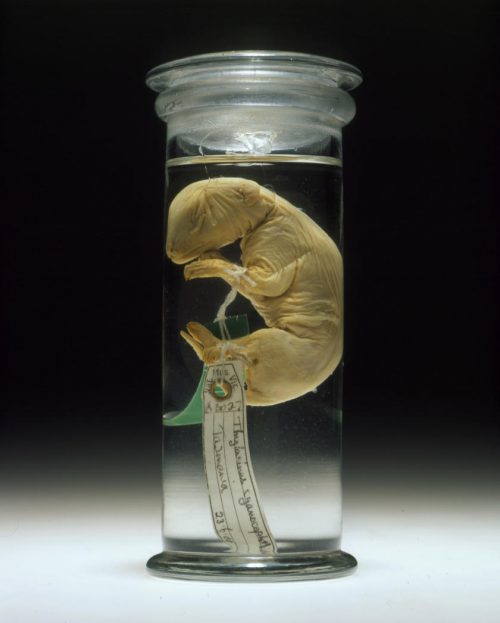 Specimen C5757, a ‘pouch-young’ was used to sequence the thylacine genome.

Bottom line: Scientists at the University of Melbourne and elsewhere worked with a rare specimen of a juvenile Tasmanian tiger or thylacine to obtain what they say is “the most complete genome for an extinct species.” It shows the tiger had poor genetic health, or low genetic diversity, and might have struggled to survive had it not been over-hunted.