Scientists use drones to probe earthly dust devils, with an eye toward Mars

Dust devils are common are common on Earth, but ubiquitous on Mars, a desert world. Scientists are using drones carrying cameras and other instruments to gain new insights.

The video above shows scientists’ encounter with a dust devil in May 2019, in the Alvord Desert in southeastern Oregon. These scientists – members of the Boise State Dust Devil Collaboration – have been flying drones through active dust devils, in part to understand earthly dust devils better, and also to understand dust devils on Earth’s neighbor planet, Mars. Physicist Brian Jackson of Boise State University said in a statement:

Dust devils, while common in arid climates on Earth, are ubiquitous on Mars, where they may be responsible for much of the planet’s haze that helps heat its atmosphere. Dust devils have been observed from landers the ground and from orbiting spacecraft all over the surface of Mars. A better understanding of dust devils on Earth will help scientists understand their influence on Mars’ climate.

In the video above, acquired with a drone, you can see how the drone tilts and drops once inside the dust devil. It’s also fun to see the drone chase the dust devil as it moves away. Jackson reported on these May 2019 observations via drone on September 19, 2019, at a joint meeting of the European Planetary Science Congress and the AAS Division for Planetary Sciences in Geneva, Switzerland. He said the drone struggled as air pressure dropped inside the dust devil. Camille M. Carlisle of SkyandTelescope.com, who apparently heard Jackson speak at the meeting, explained:

The pressure drop matches what’s expected for the wind speed twirling round the dust devil’s funnel.

Yet, Jackson said, despite the fact that dust devils have been studied for decades, scientists still aren’t entirely clear on the physics of how dust devils lift dust into the atmosphere. He said:

When we compare theoretical predictions of how much dust a devil should lift to how much it does lift, the numbers just don’t add up.

That’s why Jackson’s team thought of the drones to study dust devils. The drones carry not just cameras, but also other lightweight instruments, including pressure and temperature loggers. They measure the structures of the dust devil while taking particle samples to determine how much material the dust devil is carrying. 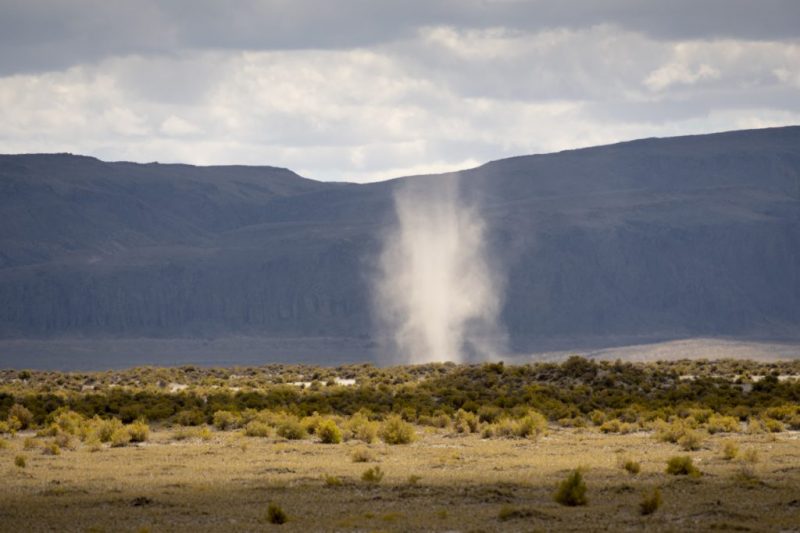 In summer 2017, Jackson and his team were awarded a grant from the NASA Idaho Space Grant Consortium to launch drones into dust devils. In 2018, they also received a three-year, $217,000 grant from NASA’s Solar System Workings Program. Why is NASA interested in dust devils? These scientists explained:

NASA currently has three active rovers on Mars, two of which are powered by solar panels. Martian dust has been a concern, falling on the panels and reducing the amount of energy generated, and the static charges that can build up in the dust devils may pose a hazard to electrical equipment deployed on Mars.

And why drones? The scientists said:

Previous studies of Martian dust devils have relied on passive sampling of the profiles via meteorology packages on landed spacecraft. Past studies of terrestrial devils have employed more active sampling (instrumented vehicles or manned aircraft) but have been limited to near-surface or relatively high-altitude sampling.

Drones promise a new and powerful platform from which to sample dust devils at a variety of altitudes. Measurements made aloft are more directly relevant for evaluating the dust that is injected into the atmosphere.

NASA may have dust on its mind since the official demise of its Mars Opportunity rover earlier this year. Opportunity – fondly nicknamed Oppy – was built to last 90 days, but spent 15 years exploring Mars, until a Mars-wide dust storm hit in June 2018. The rover relied on solar power. Its solar panels are now thought to be blanketed with dust. Engineers in the Space Flight Operations Facility at NASA’s Jet Propulsion Laboratory sent more than a thousand commands to Mars throughout this past fall and early winter, in an attempt to restore contact with the rover. It didn’t work. The rover sits silent on Mars’ surface now, in Mars’ Perseverance Valley.

The tweet below, from 2016, offers a particularly beautiful and poignant view of the Opportunity rover in relationship to a Mars dust devil.

Twisting through the valley is a Martian dust devil, seen by @MarsRovers Opportunity: https://t.co/3Rc1t2Qg2s pic.twitter.com/di8J3Flvt6

If you want more about Mars’ dust devils, check out the video below. The navigation cameras aboard NASA’s Curiosity Mars rover captured images of a few of them moving dust across Gale Crater in 2017. Dust devils result from sunshine warming the ground, prompting convective rising of air. All the dust devils in the video below were seen in a southward direction from the rover. Timing is accelerated and contrast has been modified to make frame-to-frame changes easier to see.