Satellite data show drop in air pollution over the major metropolitan areas of the U. S. Northeast. 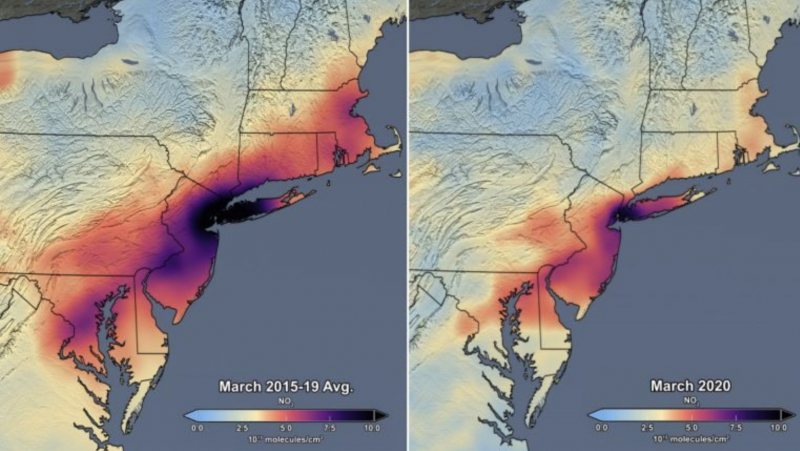 Over the past several weeks, NASA satellite measurements have revealed significant reductions in air pollution over the major metropolitan areas of the northeastern United States, according to a report by NASA on April 9, 2020. Similar reductions have been observed in Europe and other regions of the world.

But these recent improvements in air quality have come at a high cost, as communities grapple with widespread lockdowns and shelter-in-place orders due to the spread of COVID-19. 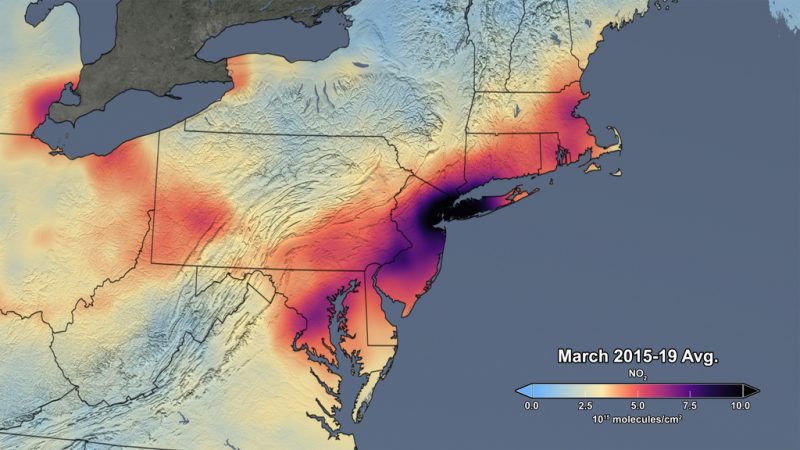 The average concentration of nitrogen dioxide measured in March of 2015-2019, as measured by the Ozone Monitoring Instrument on NASA’s Aura satellite. Image via NASA. 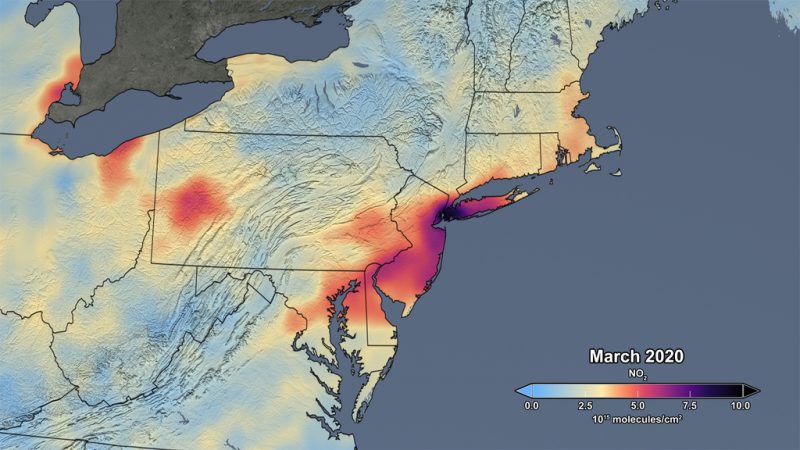 The average concentration of nitrogen dioxide in March of 2020, as measured by the Ozone Monitoring Instrument on NASA’s Aura satellite. Image via NASA.

The two images above compare the concentrations of atmospheric nitrogen dioxide over the U.S. Northeast. Nitrogen dioxide, primarily emitted from burning fossil fuels for transportation and generating electricity, can be used as an indicator of changes in human activity, said NASA.

Though variations in weather from year to year cause variations in the monthly averages, March 2020 shows the lowest monthly atmospheric nitrogen dioxide levels of any March during the satellite data record, which spans 2005 to the present. According to NASA:

The data indicate that the nitrogen dioxide levels in March 2020 are about 30% lower on average across the region of the I-95 corridor from Washington, D.C., to Boston than when compared to the March mean of 2015-19. Further analysis will be required to rigorously quantify the amount of the change in nitrogen dioxide levels associated with changes in emissions versus natural variations in weather.

Similar reductions in atmospheric nitrogen dioxide levels have been reported in other parts of the U.S. as well.

In California, the shutdown of businesses and activities related to #COVID19 has led to a decrease in nitrogen dioxide concentration. Researchers with @NASA_SPoRT used data from @ESA_EO’s Sentinel-5P satellite to track concentrations of NO2.https://t.co/LFXzRs6UT1 pic.twitter.com/yJLgbcUClz

Bottom line: NASA satellite data show a drop in air pollution over the major metropolitan areas of U. S. Northeast in March 2020.