Phosphorus carried in Saharan dust to the Amazon rainforest each year turns out to be just enough to replace that lost from the rainforest due to rain and flooding. 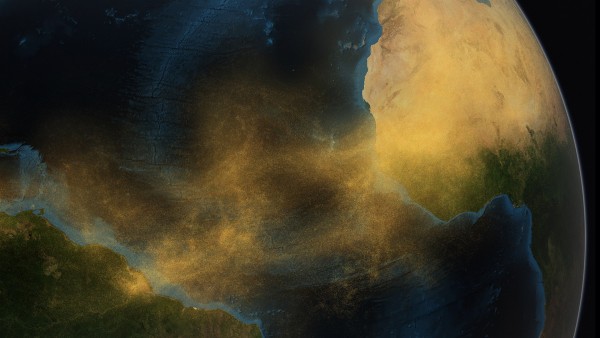 The American Geophysical Union issued a statement today (February 24, 2015) about dust lifted each year from the world’s largest desert, the Sahara, which lies across the northern third of Africa. This dust can be seen in satellite images, sweeping out to sea, making a 3,000-mile journey to South America. The Amazon rainforest is a dense green mass of humid jungle that covers northeast South America. The Sahara dust, a tan cloud in the air, stretches between these continents, and ties together the desert and the jungle. Scientists have been studying this process, and, as it turns out, Saharan dust feeds the Amazon rainforest just enough to replace lost nutrients there.

Scientists have not only used a satellite to measure the volume of dust that makes this trans-Atlantic journey. They have also calculated how much phosphorus – remnant in Saharan sands from part of the desert’s past as a lake bed – gets carried across the ocean from one of the planet’s most desolate places to one of its most fertile. A new paper accepted for publication in the journal Geophysical Research Letters provides the first satellite-based estimate of this phosphorus transport over multiple years.

Hongbin Yu, an atmospheric scientist at the University of Maryland who works at NASA’s Goddard Space Flight Center, led the new study. Yu and colleagues have previously reported the first multi-year satellite estimate of overall dust transport from the Sahara to the Amazon. According to their statement:

This trans-continental journey of dust is important because of what is in the dust, Yu said. Specifically the dust picked up from the Bodélé Depression in Chad, an ancient lake bed where rock minerals composed of dead microorganisms are loaded with phosphorus. Phosphorus is an essential nutrient for plant proteins and growth, which the Amazon rainforest depends on in order to flourish.

Nutrients – the same ones found in commercial fertilizers – are in short supply in Amazonian soils. Instead they are locked up in the plants themselves. Fallen, decomposing leaves and organic matter provide the majority of nutrients, which are rapidly absorbed by plants and trees after entering the soil. But some nutrients, including phosphorus, are washed away by rainfall into streams and rivers, draining from the Amazon basin like a slowly leaking bathtub.

The phosphorus that reaches Amazon soils from Saharan dust, an estimated 22,000 tons (24,250 U.S. tons) per year, is about the same amount as that lost from rain and flooding, Yu said.

Read more about this study from AGU

The NASA video below has more, but before you watch it, let’s just take a moment to wonder at our perfect Earth.

Bottom line: A new study by Hongbin Yu of University of Maryland and Goddard Space Flight Center shows that phosphorus carried in Saharan dust to the Amazon rainforest each year turns out to be just enough to replace that lost from the rainforest due to rain and flooding.