Image of polar vortex at its peak, January 2014

NASA image shows the polar vortex as it plunged into the United States, on its peak day of January 6, 2014. 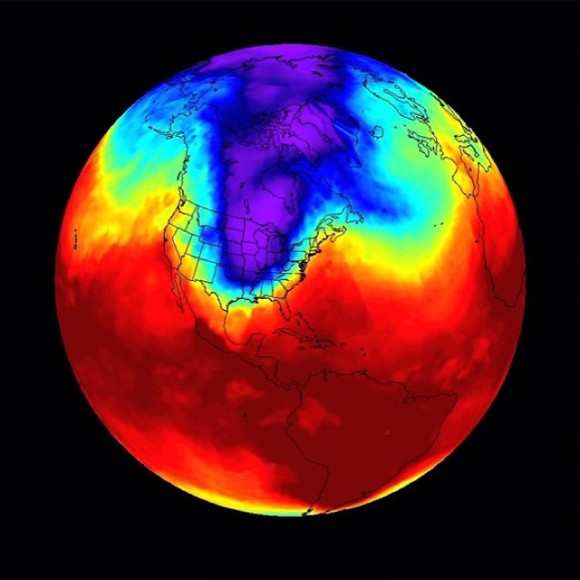 Blistering cold air from the Arctic plunged southward this winter, breaking U.S. temperature records. On January 6, 2014, alone, approximately 50 daily record low temperatures were set, from Colorado to Alabama to New York, according to the National Weather Service. In some places temperatures were 40 degrees Fahrenheit colder than average.

A pattern of winter winds that spin high above the Arctic, known as the polar vortex, typically blow in a fairly tight circular formation. But in late December 2013 and early January 2014, the winds loosened and frigid Arctic air spilled farther south than usual, deep into the continental United States.

This image is made possible by NASA’s Atmospheric Infrared Sounder, AIRS, in conjunction with the Advanced Microwave Sounding Unit, AMSU. The two work in tandem to sense emitted infrared and microwave radiation from the Earth to provide a three-dimensional look at Earth’s weather and climate. The two instruments make simultaneous observations all the way down to the Earth’s surface, even in the presence of heavy clouds.

The video below explains it more fully, or click here to go to NASA’s page on The Big Chill.