Parrots and crows solve same puzzle in their own way

Keas and New Caledonian crows are both able to accomplish similar tasks but go about it in different ways, influenced by different ancestry and adaptation to a different ecological niche. In a paper published online June 8, 2011 in PLoS ONE, a research team from the University of Vienna and Oxford University describes the results of how both species of birds solved the problem of retrieving a treat from a plastic box.

The kea, a mountain parrot from New Zealand, has highly developed manipulative skills but is not known to use tools in the wild, while the New Caledonian crow is the only non-human species with a record of using tools, modifying them, and then passing on the changes to other individuals. Both keas and New Caledonian crows are renowned for their problem solving. 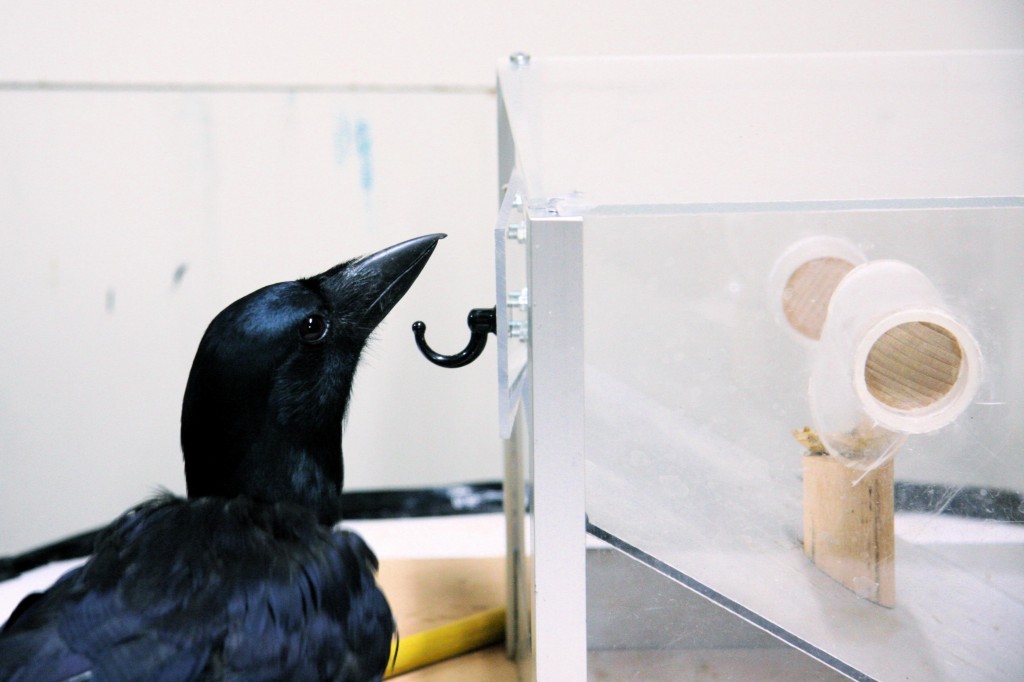 Alice Auersperg, University of Vienna, and a team of researchers set up a test that gave the birds various possibilities for solving one problem. The test used a clear plastic box — a multi-access box (MAB) — with a food treat resting inside on a pedestal.

The birds could get at the treat in four different ways, two of them involving tools. Initially, all four options were available to the birds. But as the birds mastered one method, the researchers would block that entry and study the birds as they learned a new way to get into the box.

The multi-access box presented a battery of tasks all leading to the same goal: a food treat. Image Credit: Lukas Auersperg

The first method, and the one that all the test birds found easiest, involved a string protruding from a wall and tied to the treat; pulling on it yanked the treat off its platform. It then rolled downhill and out of the box. The next wall had a hole with a tube leading downhill to the treat; pushing a marble through the hole caused it to roll downhill and knock off the treat. The next wall consisted of nothing but a hole in the wall; to get the treat, the birds had to shove a wooden rod through the hole to knock off the treat. The fourth wall had a window that could be pulled open by the use of a hook.

This video shows the complex skills of a kea named Kermit — the only parrot of those tested who learned to use the rod-shaped stick as a tool (though all of the parrots tried). Kermit provided the first experimental evidence of a kea using a stick as a tool.

The paper reports that the birds’ behavior while getting at the food mirrored their behavior in the wild. The crows were careful and appeared concerned about their surroundings while working to get at the food, while the keas attacked the box with abandon, resorting to the use of tools only when their efforts to knock the box apart or turn it over failed.

Keas relate to objects more by the sense of touch, while crows seem to relate visually. Image Credit: Peti Deuxmont

The exploratory behaviour of the two species differed considerably. The crows were more efficient in using the stick tool, while the keas were more efficient with the ball tool. The kea switched more quickly to new solutions when researchers blocked the previous one. Only one kea (of six) and one crow (of five) mastered all four options.

The authors point out that the way keas and New Caledonian crows explore, their comfort level with the unknown, and the way they manipulate objects all have a bearing on how they approach problem solving, illuminating the need to use a diversity of tasks when comparing cognitive traits between members of different species.

Problem solving is intrinsically multi-dimensional and it is to be expected that individuals or species will outperform each other in different dimensions.

Summary: A study by Alice Auersperg and her team, comprised of scientists from the University of Vienna and Oxford University, revealed behavioral differences in how two highly intelligent bird species — keas and New Caledonian crows — approach solving the same problem. Results of their study appeared online in the June 8, 2011 issue of PLoS ONE.