Scientists have identified ancient mosses in, on and around the 5,300-year-old glacier mummy that add to the story of the final 48 hours before his murder.

This article – written by Grennan Milliken – is republished with permission from GlacierHub.

After 5,300 years, Ötzi the Iceman continues to divulge secrets. Archaeobotanists recently identified 75 different species of mosses and liverworts that were sprinkled on the neolithic man’s clothing, sequestered in his gut, and buried in the icy gully where he lay for millennia after his murder at the Schnalstal glacier in the Ötzal Alps of southern Austria and northern Italy. Many of these bryophtyes — another term for mosses and liverworts — aren’t local to the spot where the Iceman was found. They reveal information about his movements in the final 48 hours of his life. A study detailing the new findings was published this past fall (October 30, 2019) in the open-access journal PLOS ONE.

When the Iceman (nicknamed Ötzi after the Ötzal Alps where he was found) was discovered by two hikers in South Tyrol, Italy, in 1991, he was lying face down in a frozen gully. He had been killed over 5,000 years prior – shot through the back with an arrow – but the glacier’s ice preserved his corpse. Also captured in the ice around his shriveled body was a menagerie of neolithic plants and fungi. The lead author of the study, Jim Dickson, told GlacierHub:

The thought that it is possible to use plant remains to work out the details of a 5,000 year-old guy’s last days is very appealing!

Dickson, now retired, was a professor of archaeobotany at the University of Glasgow, in Scotland. Ötzi, for his part, lies frozen in a cold cell in the South Tyrol Museum of Archaeology in Bolzano, Italy. 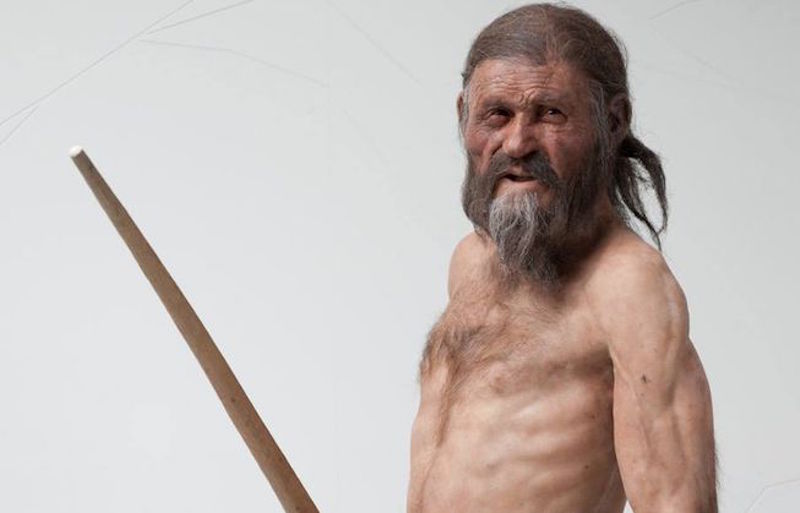 A forensic reconstruction of what Ötzi – Europe’s oldest known natural human mummy – might have looked like shortly before shot in the back by an arrow 5,300 years ago. Image via South Tyrol Museum of Archeology. 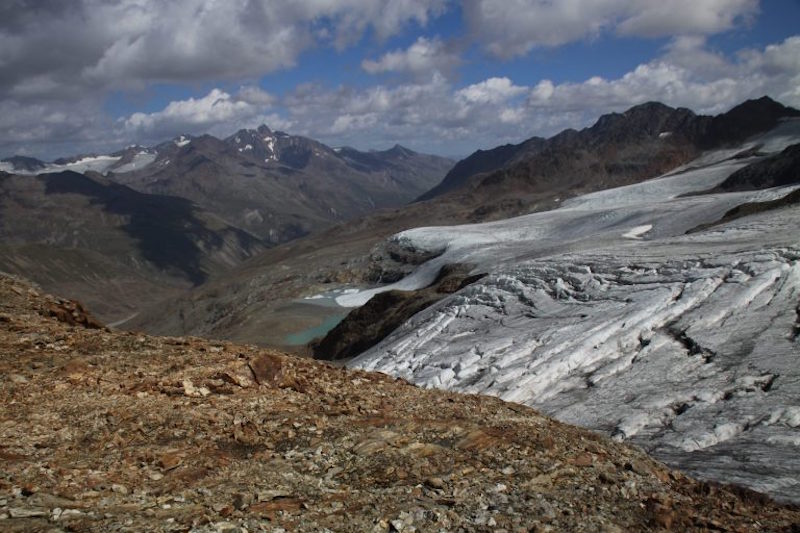 View of the Val Senales glacier and Similaun Mountain of the Schnalstal Valley where the Iceman was found protruding out of melting ice in 1991. Image via South Tyrol Museum of Archeology.

Dickson and his colleagues from the University of Innsbruck, in Austria, gathered thousands of fragments of bryophytes picked off the Iceman’s clothes, gear, the grass mats in the gully where he was found, and his gut. The assemblage of liverworts from that period – 10 species altogether – is a particularly big find, because they do not last long exposed to weathering elements. Researchers surmised the plants must’ve been rapidly frozen by the glacier.

Seventy percent of the species picked from in and around Ötzi’s body do not live at the altitude where he was found, about 10,500 feet (3,200 meters) above sea level. This indicates to researchers that he carried some there himself. Others were likely deposited by animals, water or wind. Mosses and liverworts are unique non-vascular plants that do not reproduce with seeds, but with spores. They can cling unseen on people’s clothes or animals’ fur in the way that fungal spores or pollen can. As a person or creature tramps through the forest or meadows, tiny fragments of mosses can stick to their outsides as well.

The mosses found in the Iceman’s gut were not ingested intentionally. In the same way that spores and fragments adhere to clothes or fur, they could’ve stuck to his food and gotten to his insides that way. Alpine ibex or chamois (a goat-antelope native to Europe) were likely the animals that unwittingly carried some of the other moss species up Schnalstal. Ötzi himself was a hunter – his bow was recovered by his side – and his last meal was of cured ibex meat.

Other neolithic mummies found preserved in bogs have had some mosses in their guts, but according to Dickson, these were not eaten intentionally either. He said:

Mosses are not nutritious or palatable. There is no good evidence that mosses have ever been eaten as staples anywhere, by anyone present or past.

Some species of moss have been used by indigenous peoples for medicinal and other practical purposes, however, and the Iceman himself did seem to be carrying one particular species of moss intentionally – Neckera complanata – that he had wrapped his food in. 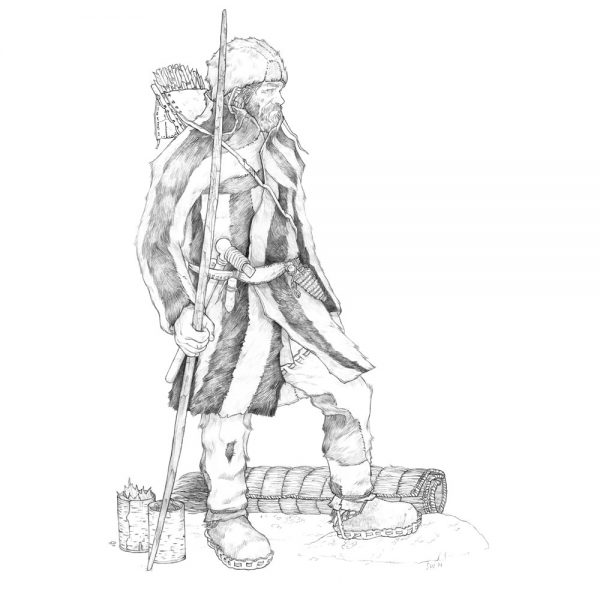 Scientists say Ötzi was approximately 5.2 feet (1.6 meters) tall and weighed 110 pounds (50 kg) in life. He had dark, medium-long hair, probably had a beard, had brown eyes and, at the age of 45, had already reached a good age for the period. Image via South Tyrol Museum of Archaeology/.

He may have also used some of the mosses found in his gut to dress a deep cut on his hand. Experts believe Ötzi sustained the injury in a fight a few days before his death. Two of the mosses found in his gut – both species of bogmoss – have absorbent, antiseptic properties and are found lower down the mountain. Dickson believes Ötzi used these bogmosses to staunch his badly sliced palm. Tiny pieces of moss would have stuck to his bloody fingers, so that when he ate, he’d have accidentally ingested the plants too.

The Neckera complanata, bogmosses, and two other species collected with Ötzi are particularly revealing about his activities in the last forty-eight or so hours of his life. These mosses are all found at lower elevations in the Schnalstal Valley and indicate that he took a particularly strenuous climb up the glacier through a gorge.

This corroborates a previous theory of his movements suggested after pollen from hophornbeam trees was found in large quantities in his bowels. Hophornbeam are plentiful in the lower Schnalstal.

Why he took such a tiresome route up the Schnalstal could be explained by the fact that he was murdered and was possibly on the run from his attacker. The gorge is full of boulders and trees and has many hiding spots. Why he was on the lam we’ll never know, but it could’ve had to do with the cut he received on his hand a few days earlier. Perhaps an altercation broke out that caused him to flee for his life. In spite of his murderous end, however, countless studies of Ötzi and his belongings have furnished invaluable gifts of information about early human history that would otherwise be unknown. 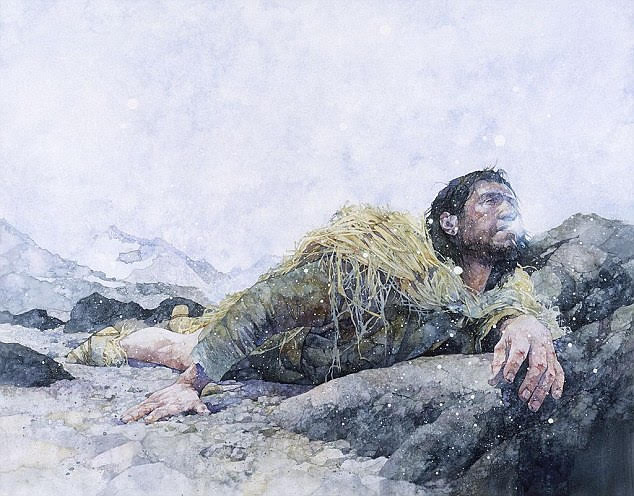 Here’s an artist’s concept of what Ötzi – now Europe’s oldest known natural human mummy – might have looked like shortly after being shot in the back by an arrow, 5,300 years ago. Image via the Daily Mail.

Bottom line: Ancient mosses identified in, on and around the 5,300-year-old glacier mummy called Ötzi the Iceman add to the story of the final 48 hours before his murder.