Hundreds of marine turtles die every year after getting tangled in trash – such as plastic ‘six pack’ holders and discarded fishing gear – in oceans and on beaches. 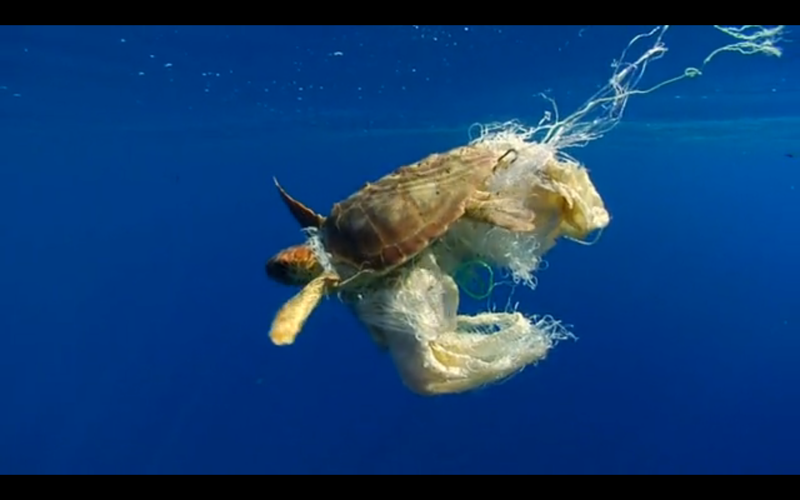 The increase in plastic pollution in Earth’s oceans and on beaches is killing turtles of all species, with a disproportionate impact on hatchlings and young turtles, according to research published December 11, 2017 in the journal Endangered Species Research.

The study, a world-wide survey covering the major oceans where turtles live, discovered that 91 percent of the entangled turtles were found dead. They also suffered serious wounds from entanglement, leading to maiming, amputation or choking. Others that survived were forced to drag discarded rubbish or debris with them. 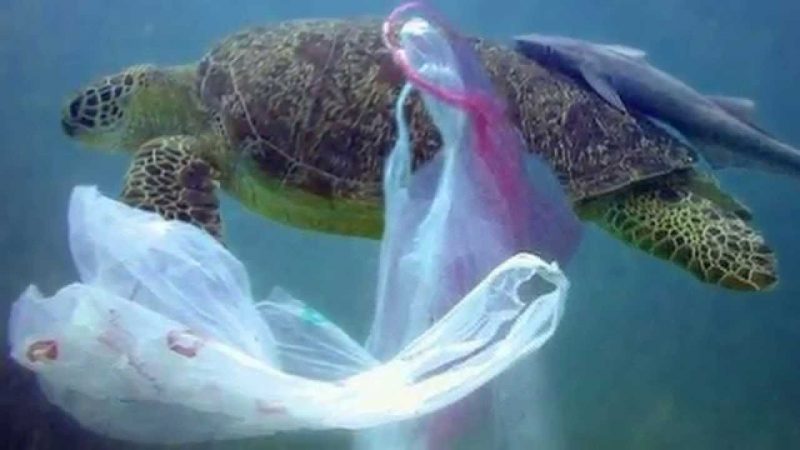 An additional threat of plastic pollution to marine turtles, other research has shown, is that turtles eat plastic rubbish and marine creatures caught up in it.

Hatchlings and young sea turtles are particularly susceptible to getting tangled up in lost or discarded fishing gear or floating debris. Juvenile turtles ride on ocean currents to zones where floating rubbish and debris is concentrated. They also can set up home near floating debris and remain there for years.

Brendan Godley, Professor of Conservation Science at the University of Exeter, is the study lead author. He said that mortality from entanglement has increased substantially over the last century, not just for turtles but for other marine mammals and birds, and as plastic pollution increases, more and more turtles are likely to become entangled.

Godley said the mortality rate from becoming tangled up in human refuse was, in practice, likely to be far higher than 1,000 turtles a year estimated by the study:

Plastic rubbish in the oceans, including lost or discarded fishing gear which is not biodegradable, is a major threat to marine turtles. We found, based on beach strandings, that more than 1000 turtles are dying a year after becoming tangled up, but this is almost certainly a gross underestimate. Young turtles and hatchings are particularly vulnerable to entanglement.

Experts we surveyed found that entanglement in plastic and other pollution could pose a long term impact on the survival of some turtle populations and is a greater threat to them than oil spills. We need to cut the level of plastic waste and purse biodegradable alternatives if we are to tackle this grave threat to turtles’ welfare.

All species of turtle were found entangled, but Olive Ridley turtles are the most likely species to get tangled up. The species nests in the hundreds of thousands. It forages in areas where marine debris can aggregate. It may also be attracted to feeding on marine rubbish, including discarded fishing tackle.

Most entanglements recorded were in lost or discarded fishing gear known as ghost fishing rope, nets and lines. Since the 1950s the fishing industry has replaced natural fibres such as cotton, jute and hemp with synthetic plastic materials such as nylon, polyethylene and polypropylene which doesn’t biodegrade in water.

Bottom line: A new study by researchers at University of Exeter found that plastic pollution is Earth’s oceans is killing marine turtles.