North America once linked to Australia?

A new tectonic model suggests that the continent of North America may have once been attached to Australia. 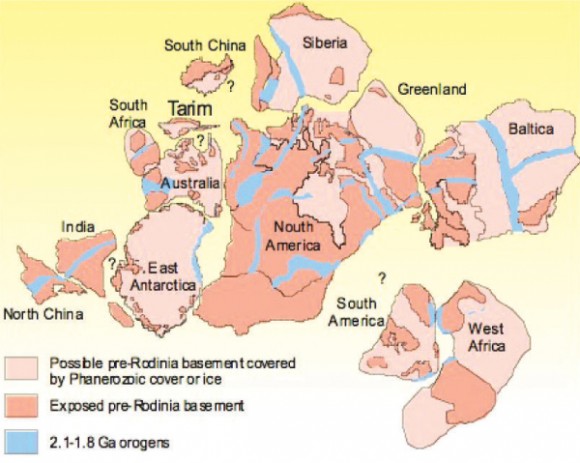 A reconstruction of the proposed supercontinent Columbia, configured by Zhao et al. (2002)

More than a billion years ago, North America may have been attached to Australia. That’s according to new research published May 21 in the journal Lithosphere.

Approximately every 300 million years, the Earth completes a supercontinent cycle wherein continents drift toward one another and collide, remain attached for millions of years, and eventually rift back apart. Geologic processes such as subduction and rifting aid in the formation and eventual break-up of supercontinents, and these same processes also help form valuable mineral resource deposits.

Determining the geometry and history of ancient supercontinents is an important part of reconstructing the geologic evolution of Earth, and it can also lead to a better understanding of past and present mineral distributions.

North America is a key component in reconstructions of many former supercontinents, and there are strong geological associations between the western United States and Australia, which is one of the world’s leading mineral producers.

In this study, geologists synthesized mineral age data from ancient sedimentary rocks in the Trampas and Yankee Joe basins of Arizona and New Mexico. They found that the ages of many zircon crystals—mineral grains that were eroded from other rocks and embedded in the sedimentary deposits—were approximately 1.6 to 1.5 billion years old, an age range that does not match any known geologic age provinces in the entire western United States.

This surprising result actually mirrors previous studies of the Belt-Purcell basin (located in Montana, Idaho and parts of British Columbia, Canada) and a recently recognized basin in western Yukon, Canada, in which many zircon ages between 1.6 and 1.5 billion years old are common despite the absence of matching potential source rocks of this age.

However, the distinctive zircon ages in all three study locations do match the well known ages of districts in Australia and, to a slightly lesser known extent, Antarctica.

Though the basins eventually evolved along very different trajectories, they have a shared history when they were first formed. That history gives us clues as to what continents bordered western North America 1.5 billion years ago.

The tectonic model presented in this paper suggests that the North American sedimentary basins were linked to sediment sources in Australia and Antarctica until the break up of the supercontinent Columbia. The dispersed components of Columbia ultimately reformed into Rodinia, perhaps the first truly global supercontinent in Earth’s history, around 1.0 billion years ago.

Bottom line: More than a billion years ago, North America may have been attached to Australia. That’s according to new research published May 21 in the journal Lithosphere.

Read more from the USGS