The brief season for night shining clouds has arrived, NASA says. A photographer spotted these a few days ago.

Noctilucent or night shining clouds have their brief season of visibility beginning every year in late spring. They shine at full intensity over a period of no more than five to 10 days. Apparently, the season for these rare clouds has now begun in the Northern Hemisphere, NASA said earlier today (June 15, 2012). 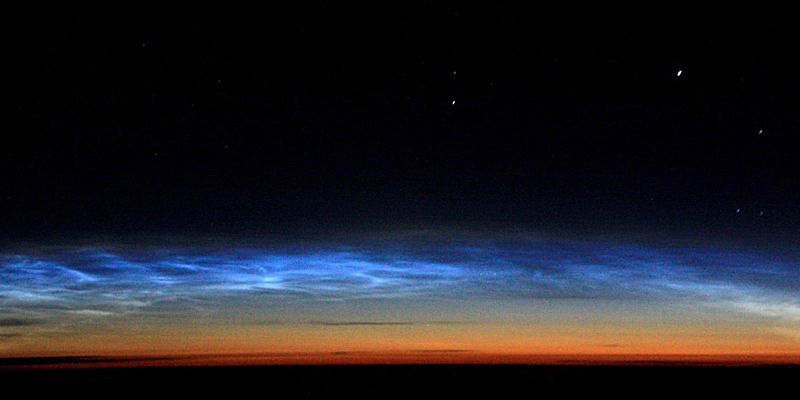 The photo above is from flying photorapher Brian Whittaker, who reported seeing the clouds on June 13, 2012. He said:

They were visible to the north for about 3 hours as we flew between Ottawa and Newfoundland at 35,000 feet.

These clouds are made of crystals of water ice, but what makes them shine isn’t clear. NASA says spoke of “meteoric dust, rocket exhaust, global warming, or some mixture of the three” as possible explanations.

You’re only likely to see them between about 50° and 70° North and South latitudes – in other words, at high latitudes, edging up toward either pole. But night shining clouds been sighted as far south as Colorado and Virginia. They are truly night shining and become visible only when the sun is down. NASA said:

[At] high latitudes during the summer months, look west 30 to 60 minutes after sunset when the sun has dipped 6-16 degrees below the horizon. If you see luminous blue-white tendrils spreading across the sky, you may have spotted a noctilucent cloud.

Bottom line: Noctilucent or night shining clouds are a rare yearly phenomenon, visible mainly at high latitudes. They shine at their peak intensity for only a few weeks every summer. Flying photographer Brian Whittaker reported seeing the clouds on June 13, 2012.