Updated results of the NOAA Annual Greenhouse Gas Index (AGGI) show a continued rise in greenhouse gases and a decrease in chlorofluorocarbons.

The updated Annual Greenhouse Gas Index (AGGI), which measures the direct climate influence of many greenhouse gases such as carbon dioxide and methane, shows a continued steady upward trend, according to a November 9, 2011, press release by the National Oceanic and Atmospheric Administration (NOAA). This upward trend began with the Industrial Revolution of the 1880s.

The index, which reports results for the previous year, reached 1.29 in 2010. That means the combined heating effect of long-lived greenhouse gases added to the atmosphere by human activities has increased by 29 percent since 1990, the “index” year used as a baseline for comparison. (The official AGGI began in 2004.)

This is slightly higher than the 2009 AGGI, which was 1.27, when the combined heating effect of those additional greenhouse gases was 27 percent higher than in 1990.

The increasing amounts of long-lived greenhouse gases in our atmosphere indicate that climate change is an issue society will be dealing with for a long time. Climate warming has the potential to affect most aspects of society, including water supplies, agriculture, ecosystems and economies. NOAA will continue to monitor these gases into the future to further understand the impacts on our planet.

The AGGI is analogous to the dial on an electric blanket – that dial does not tell you exactly how hot you will get; nor does the AGGI predict a specific temperature. Yet just as turning the dial up increases the heat of an electric blanket, a rise in the AGGI means greater greenhouse warming.

NOAA scientists created the AGGI, recognizing that carbon dioxide is not the only greenhouse gas affecting the balance of heat in the atmosphere. Many other long-lived gases also contribute to warming, although not currently as much as carbon dioxide. 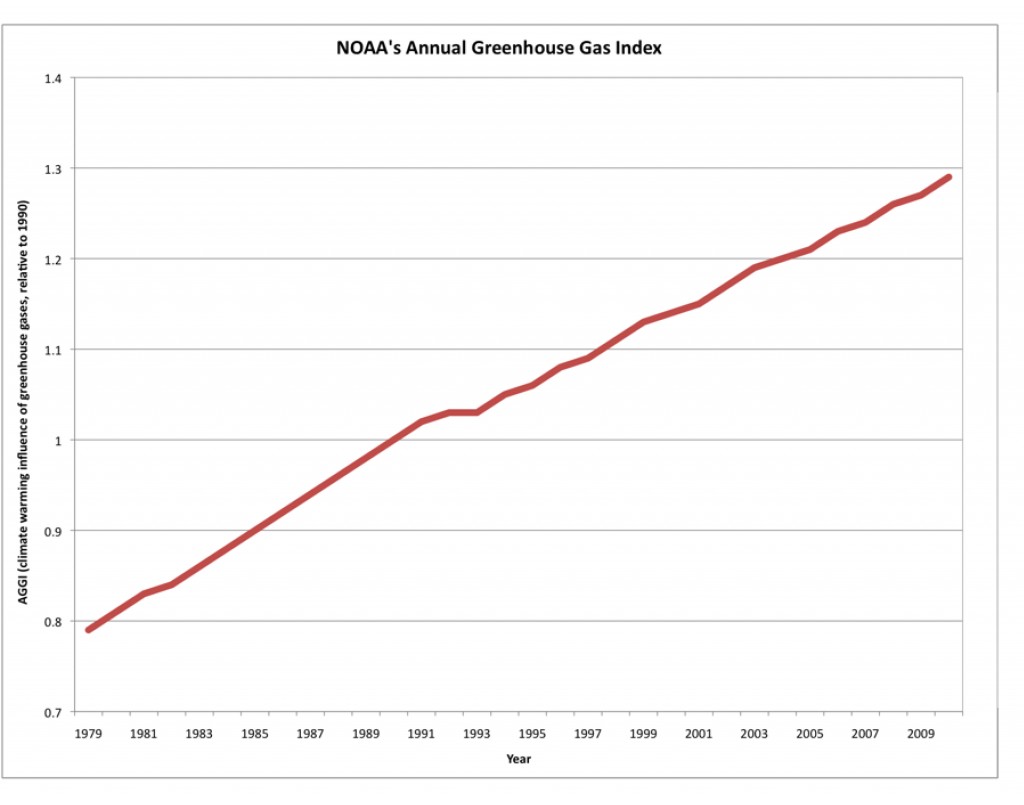 AGGI is a measure of the heating effect of greenhouse gases added to the atmosphere by human activities. Image Credit: NOAA

The AGGI includes methane and nitrous oxide, for example — greenhouse gases that are emitted by human activities and also have natural sources and sinks. It also includes several chemicals known to deplete Earth’s protective ozone layer, which are also active as greenhouse gases. The 2010 AGGI reflects several changes in the concentration of these gases, including these:

A continued steady increase in carbon dioxide: Global carbon dioxide levels rose to an average of 389 parts per million in 2010, compared with 386 ppm in 2009, and 354 in the index or comparison year of 1990. Before the Industrial Revolution of the 1880s, carbon dioxide concentration in the atmosphere was about 280 ppm. Carbon dioxide levels swing up and down in natural seasonal cycles, but human activities – primarily the burning of coal, oil, and gas for transportation and power – have driven a consistent upward trend in concentration.

A continued recent increase in methane: Methane levels rose in 2010 for the fourth consecutive year after remaining nearly constant for the preceding 10 years, up to 1799 parts per billion. Methane measured 1794 ppb in 2009, and 1714 ppb in 1990. Pound for pound, methane is 25 times more potent as a greenhouse gas than carbon dioxide, but there’s less of it in the atmosphere.

A continued steady increase in nitrous oxide: Best known as laughing gas in dentistry, nitrous oxide is also a greenhouse gas emitted from natural sources and as a byproduct of agricultural fertilization, livestock manure, sewage treatment and some industrial processes. 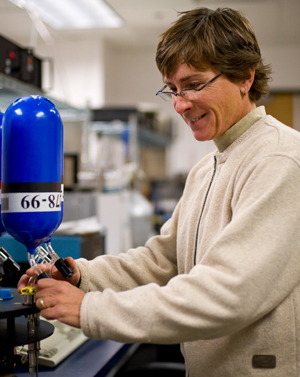 NOAA’s Patricia Lang prepares to measure greenhouse gas levels inside a flask that is part of NOAA’s global air sampling network. Measurements are made from remote sites around the world. Image Credit: NOAA

A continued recent drop in two chlorofluorocarbons, CFC11 and CFC12: Levels of these two compounds – which are ozone-depleting chemicals in addition to greenhouse gases – have been dropping at about one percent per year since the late 1990s, because of an international agreement, the Montreal Protocol, to protect the ozone layer.

Scientists at NOAA’s Earth System Research Laboratory prepare the AGGI each year from atmospheric data collected through an international cooperative air sampling network of more than 100 sites around the world.

NOAA researchers developed the AGGI in 2004 and have so far back calculated it to 1978. Atmospheric composition data from ice core and other records could allow the record to be extended back centuries.