An initial draft, a collaborative effort from scientists at 11 institutions, of a new, comprehensive evolutionary tree of life. Plus … 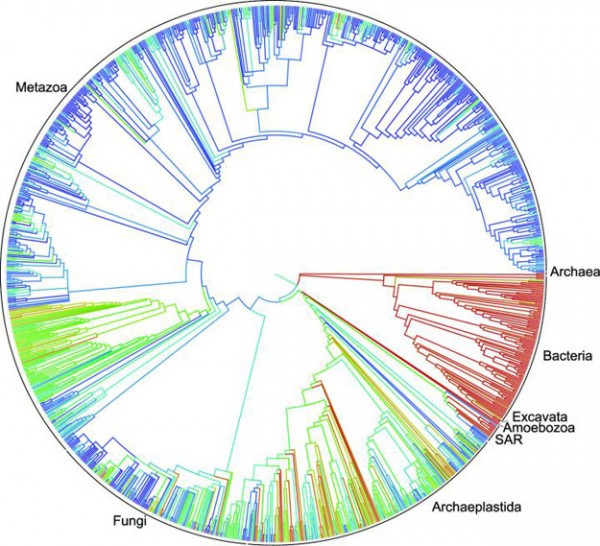 A draft of a new evolutionary “tree of life” via Astrobiology.com.

Astrobiology.com is reporting a newly released first draft of a tree of life for the roughly 2.3 million named species of animals, plants, fungi and microbes – as they described it, from platypuses to puffballs – inhabiting our Earth today. In biology, a tree of life is a way of depicting evolutionary relationships among various species, based on similarities and differences in physical or genetic characteristics. Scientists at 11 institutions collaborated to create this new tree of life, which shows:

… the relationships among living things as they diverged from one another over time, tracing back to the beginning of life on Earth more than 3.5 billion years ago.

Tens of thousands of smaller trees have been published over the years for select branches of the tree of life — some containing upwards of 100,000 species — but this is the first time those results have been combined into a single tree that encompasses all of life.

A single tree that encompasses all of life. Wow. Karen Cranston of Duke University of Duke University leads this project, which is also described in an article appearing September 18, 2015 in the Proceedings of the National Academy of Sciences. Cranston told Astrobiology.com:

This is the first real attempt to connect the dots and put it all together. Think of it as Version 1.0.

These scientists are working toward an end result that can be a digital resource – available free online for anyone to use or edit – much like a Wikipedia for evolutionary trees of this kind, they said.

The current version of the tree — along with the underlying data and source code — is available to browse and download at https://tree.opentreeoflife.org.

Read more about the new tree of life at Astrobiology.com

And now for something completely different! Not yet thrilled with the new tree of life? It is, truly, something that might be of more interest to scientists than to most of us. If that’s the case for you, all is not lost. Maybe you’ll enjoy the video below – Animal Beatbox, Winner of Tropfest Australia 2011 from Damon Gameau:

Here we travel down a very special river and are introduced to a wide variety of the animal kingdom who all contribute their name for the sake of music.

Bottom line: Okay, I admit it, this is a weird mashup consisting of a few words about an initial draft, a collaborative effort from scientists at 11 institutions, of an evolutionary tree of life … with a video called Animal Beatbox. Shout out to @GalenQuick and @WhySharksMatter on Twitter for the video!