The new fossil discoveries provide clues about flying, spike-toothed reptiles that lived in the Sahara 100 million years ago. 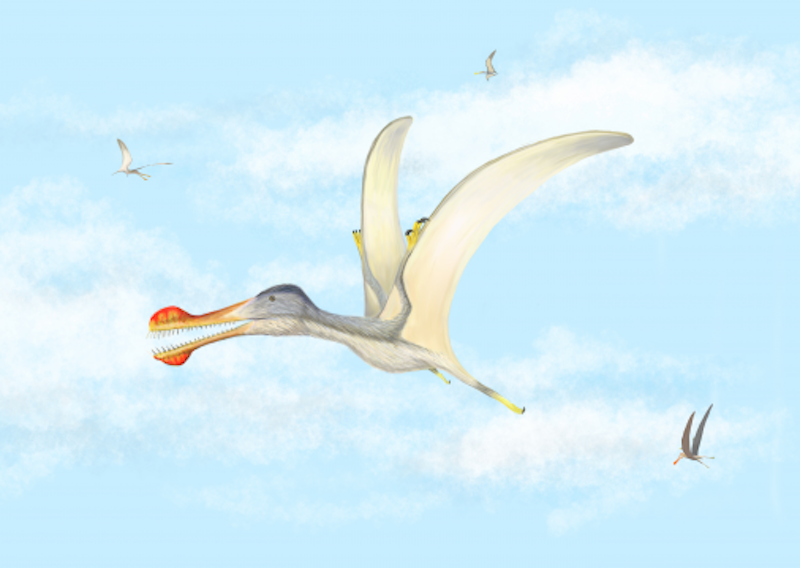 Anhanguera soaring the skies over the Kem Kem with Coloborhynchus and Ornithocheirus. Image via Megan Jacobs/ Baylor University.

An international team of scientists has identified three new species of toothed pterosaurs – flying reptiles of the Cretaceous period, some 100 million years ago – that lived in an ancient river ecosystem in the African Sahara.

The new pterosaurs, described in a study published in the February 19, 2020, in the journal Cretaceous Research, were identified from chunks of jaws and teeth found in a geological formation in Morocco called the Kem Kem Beds. University of Portsmouth paleontologist David Martill is a study co-author. He told The Guardian:

These flying predators soared above a world dominated by predators, including crocodile-like hunters and carnivorous dinosaurs. Interestingly, herbivores such as sauropods and ornithischian dinosaurs are rare.

Many of the predators, including the toothed pterosaurs, preyed on a superabundance of fish.

Megan L. Jacobs of Baylor University, is the study lead author. She said in a statement:

For such large animals, they would have weighed very little. Their wingspans were around 10 to 13 feet [3 to 4 meters], with their bones almost paper-thin and full of air, very similar to birds. This allowed these awesome creatures to reach incredible sizes and still be able to take off and soar the skies.

Pterosaurs hunted from the air, using a set of large spike-like teeth to grab their prey. Large pterosaurs such as these would have been able to forage over hundreds of miles, with fossil evidence suggesting they flew between South America and Africa, similar to present-day birds such as condors and albatrosses, the researchers said.