Newly-discovered ozone-depleting chemicals are accumulating in the atmosphere despite being banned under an international treaty, research reveals. 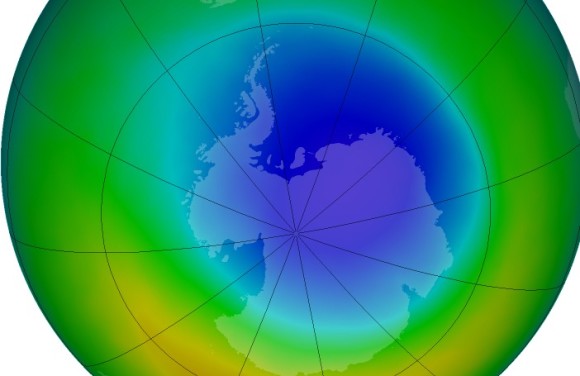 Chlorofluorocarbons (CFCs) were outlawed under the 1987 Montreal Protocol in response to growing damage to the ozone layer, the Earth’s natural protective shield against harmful UV rays from the sun.

Most have been declining steadily ever since, but CFC-113a seems to have been accumulating unabated since 1960. Between 2010 and 2012, emissions of the gas jumped by 45 percent.

It is one of four man-made chemicals newly discovered in the atmosphere by a team at the University of East Anglia.

This included two further CFCs and a hydrochlorofluorocarbon (HCFC), which also affects the ozone layer to a lesser extent. But CFC-113a is the only known CFC whose abundance in the atmosphere is still growing.

In the 1980s, scientists from NERC’s British Antarctic Survey discovered a giant hole in the ozone layer over the South Pole.

The hole forms throughout the southern spring from September to November, leaving populations in the southern hemisphere dangerously exposed to cancer-inducing UV rays.

Global measurements charted a steady decade-by-decade decline in the total amount of ozone in the Earth’s stratosphere, and holes have also been recorded over the Arctic and Tibet.

Since the Montreal Protocol came into force there have been dramatic reductions in CFCs, and there is now an overall trend towards ozone recovery.

But this new discovery, published in the journal Nature Geoscience, will raise questions over the continuing effectiveness of the treaty. Dr. Johannes Laube led the study. He said:

We still don’t know the source of these chemicals.Illegal activity is one possibility, but there are also lots of loopholes and caveats in the Montreal Protocol that may need addressing.

For example, it seems that an exemption was granted for CFC-113a in 2003 for the manufacture of an insecticide.

And there are problems with the reporting system. Uses have to be reported but they’re not made public. So it’s possible that CFC-113a has been reported somewhere, but we can’t track it.

The team analyzed air samples collected from the pristine air above Tasmania, as well as bubbles trapped in deeply buried snow on the Greenland ice sheet, to get a picture of global CFC gas concentrations over time.

Altogether, more than 74,000 tonnes of the four newly-discovered gases were released into the atmosphere from around 1960 up to 2012.

The figure is small compared to the peak CFC emissions of the 1980s, which ran into the millions of tonnes per year. But Laube is nevertheless concerned about the effect these new chemicals could be having on both the ozone layer and the climate. He said:

The identification of these four new gases is very worrying as they will all contribute to the destruction of the ozone layer.

Almost all CFCs are also very strong greenhouse gases. We estimate that they’re typically thousands of times as potent as carbon dioxide, although their concentrations are much smaller. And they can hang around in the atmosphere for up to 50 years or more. So their effects on the climate need to be considered as well.