This insect has nature’s highest-pitched call

The newly discovered ‘Supersonus’ hits the animal kingdom’s highest-pitch call. Why? For love, of course. 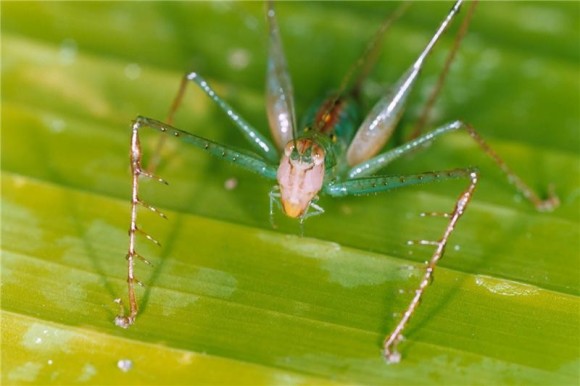 In the rainforests of Colombia and Ecuador, an international team of scientists have discovered a new genus with three new species of katydid with the highest ultrasonic calling songs ever recorded.

The calling frequencies used by most katydids range between 5 kHz and 30 kHz. But these insects were found to produce the highest ultrasonic calling songs known in nature, with males reaching 150 kHz – too high for us to hear. Our hearing range ends at around 20 kHz. For this reason, the new genus has been named Supersonus.

Katydids (or bushcrickets) are insects known for their acoustic communication, with the male producing sound by rubbing its wings together (stridulation) to attract distant females for mating.

Dr. Fernando Montealegre-Z, from the University of Lincoln, UK, said:

To call distant females, male katydids produce songs by ‘stridulation’ where one wing (the scraper) rubs against a row of ‘teeth’ on the other wing. The scraper is next to a vibrating drum that acts like a speaker. The forewings and drums are unusually reduced in size in the Supersonus species, yet they still manage to be highly ultrasonic and very loud.

These insects have lost the ability of flight due to their reduced wing size, so the adoption of extreme ultrasonic frequencies might play a role in avoiding predators, such as bats, the researchers said. Bats can detect their prey’s movements using echolocation but can also eavesdrop and detect the calls of singing animals like katydids and frogs.

Rainforest katydids have learned to avoid bats by reducing the time spent singing and by evolving an ear that can detect the ultrasonic echolocation calls of the bats. Although some bats can detect 150 kHz, by singing at extreme ultrasonic frequencies, the katydid calls degrade faster with distance so that a flying bat will find it harder to hear the signal.

The research is published in the journal PLOS ONE.