In the August 2011 issue of the journal Environmental Science & Technology, two scientists report that microbes are key ingredients to oil spill cleanups.

Terry Hazen, a microbial ecologist with the Lawrence Berkeley National Laboratory, and Ron Atlas, a University of Louisville biology professor, looked back at two of the worst oil spills in U.S. history: last year’s Deepwater Horizon oil spill in the Gulf of Mexico and 1989’s Exxon Valdez spill in Prince William Sound off the coast of Alaska. The ecosystems in the two cases were very different, these scientists say, but in both cases microorganisms played a major role in “cleaning” the spilled oil. As Hazen told the press:

The fate of all oil spills … depends upon a unique set of circumstances that will govern risk and impacts, including the volume of oil spilled, the chemical nature of the oil, and the ecosystems with their specific environmental conditions impacted by the spilled oil. However, the one common denominator is the cosmopolitan nature of oil-degrading microbes.

A visitor to Green Island in Prince William Sound holds up a non-oiled rock to visually demonstrate the difference between clean and oily after the Exxon Valdez oil spill. Image Credit: ARLIS

In their paper, the scientists used data analysis to examine the Exxon Valdez spill of March 24, 1989, which occurred when the oil tanker Exxon Valdez ran aground in Prince William Sound. The tanker dumped about 11 million gallons of crude oil from Alaska’s North Slope, which turned into a surface slick. Currents and winds washed much of the oil onto shore, and that shoreline mess became a major focus of cleanup efforts. Hazen said:

Because of the difficulty of achieving sufficient oil removal by physical washing and collection … bioremediation became a prime candidate for continuing treatment of the shoreline. Field tests showed that the addition of fertilizer enhanced the rates of biodegradation by the indigenous hydrocarbon-degrading microorganisms, resulting in total petroleum-hydrocarbon losses as high as 1.2 percent per day. Within a few weeks of the spill, about 25 to 30 percent of the total hydrocarbon in the oil originally stranded on Prince William Sound shorelines had been degraded, and by 1992 the length of shoreline still containing any significant amount of oil was 6.4 miles [just over 10 kilometers], or about 1.3 percent of the shoreline originally oiled in 1989.

That’s a technical way of saying that, when nitrogen was added to nearby Alaskan water, (native) microbe levels spiked. These oil-eating microbes then reduced the amount of oil from the spill. 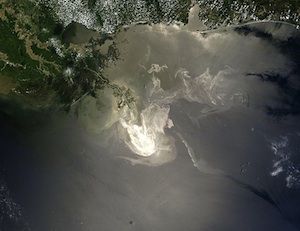 Last year’s BP Deepwater Horizon spill was the result of an explosion of the drilling rig on April 20, 2010 that led to an uncontrolled blowout of the wellhead. The spill released an estimated 4.9 million barrels (205.8 million gallons) of light crude oil – more than an order of magnitude greater in total volume of oil than the Exxon Valdez spill – and considerable amounts of natural gas (methane). Light crude is more inherently biodegradable initially than heavy crude, and in contrast to the relatively pristine conditions of Prince William Sound, the Gulf of Mexico experiences numerous natural seeps of oil and has been the site of other spills from drilling rigs, such as the IXTOC well blowout of 1979.

That is to say, the Gulf of Mexico today is in some sense more accustomed to the presence of oil and methane than Alaska’s more pristine waters. In addition, the Gulf spill, while greater in sheer volume, was a little easier to handle in terms of its chemical makeup – the oil was lighter, and it dispersed like a cloud throughout the water, rather than as a surface slick.

Nevertheless, bacteria played an important role in gobbling up oil from the 2010 Gulf spill, too. Hazen’s team was able to determine that microbes native to the Gulf of Mexico broke down the oil plume to “virtually undetectable levels” just a few weeks after the gushing well was sealed. They also said:

… up to 40 percent of the oil was lost in the water column between the wellhead and the surface, largely due to dissolution and mixing as the oil moved to the surface, and evaporation as soon as it reached the surface.

It’s important to note that the spill is so recent that many further studies will be needed to determine exactly what effect microbes (and added dispersal agents) had on the spill, but, the scientists said:

When oil is highly dispersed in the water column and where microbial populations are well adapted to hydrocarbon exposure, such as in Gulf of Mexico waters, biodegradation of oil proceeds very rapidly.

They also added that, in the future, oil spill first-responders need to assess, as quickly as possible, how both natural and “enhanced” microbial degradation could be used to minimize the risk and impact of an oil spill on the environment.

Bottom line: Microorganisms can play a major role in cleaning up spilled oil, even in different kinds of ecosystems. Terry Hazen, a microbial ecologist with the Lawrence Berkeley National Laboratory, and Ron Atlas, a University of Louisville biology professor, looked back at two of the worst oil spills in U.S. history: 2010’s Deepwater Horizon oil spill in the Gulf of Mexico and 1989’s Exxon Valdez spill in Prince William Sound off the coast of Alaska. They found that, in both cases, microbes accelerated oil reduction.

Mandy Joye on the Gulf oil spill, one year later