NASA is tracking a gargantuan iceberg, escaped from Antarctica

After six months of winter darkness in Antarctica, NASA has re-acquired satellite images of the huge iceberg B31. 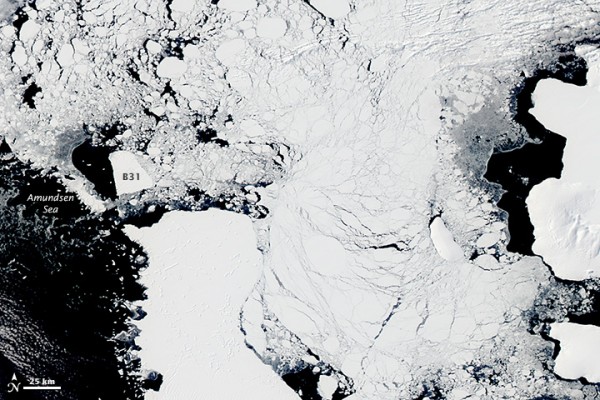 A first look at Antarctic iceberg B31, following the Southern Hemisphere winter. NASA’s Aqua satellite captured this image on November 22, 2014.

Winter has lifted from Antarctica’s Pine Island Bay, so that passing satellites can once again acquire sunlit views of massive iceberg B31 as it drifts in the Amundsen Sea. NASA has been tracking this iceberg – an ice island, really – since it separated from the front of Antarctica’s Pine Island Glacier a year ago (November 2013). It’s 240 square miles (over 600 square kilometers), in contrast to about 23 square miles for New York’s Manhattan Island. When southern winter fell around May 2014, darkness came to this region of Earth and the iceberg could not be seen for six months. It was thought then it would likely be swept up in the swift currents of the Southern Ocean, but, for now, it’s still in the Amundsen Sea – moving west – free now of surrounding debris and sea ice. Scientists expect that the berg will continue moving west.

Iceberg calving is a very normal process. However, the detachment rift, or crack, that created this iceberg was well upstream of the 30-year average calving front of Pine Island Glacier, so this a region that warrants monitoring.

Pine Island Glacier itself – the source of the massive iceberg – has been the subject of intense study in the past several decades. Scientists speak of this glacier as the weak underbelly of the West Antarctic Ice Sheet. The glacier has been thinning and draining rapidly and may be one of the largest contributors to sea level rise. Read more: As ocean warms, Antarctica’s Pine Island Glacier thaws

Large icebergs like this one pose a danger to ships. Our modern shipboard technologies – radar and warning systems – can’t always prevent accidents. For example, in 2007, the MS Explorer, an Antarctic cruise ship, sank after striking an iceberg near the South Shetland Islands. Read more at CBS News.

Read more the images of B31 from NASA Visible Earth 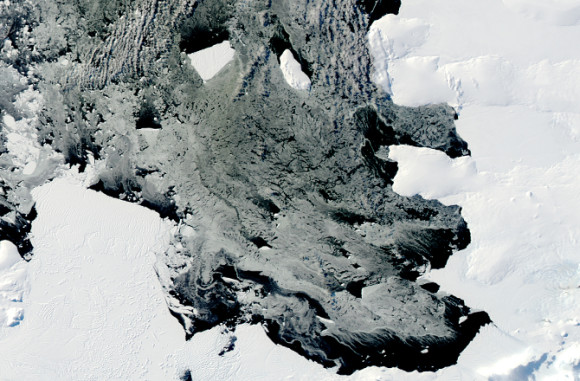 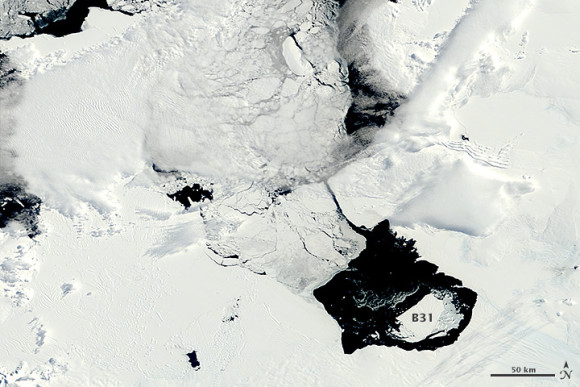 The ice island B31 broke away from Pine Island Glacier in early November, 2013. 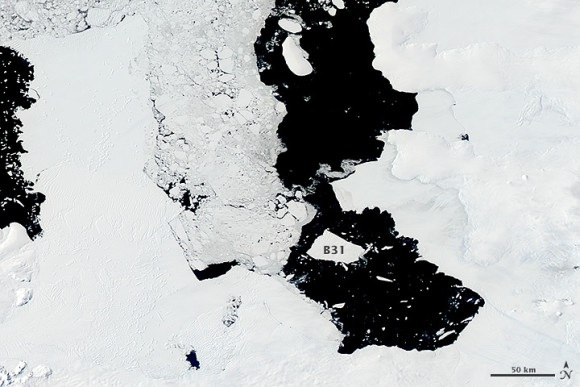 Over the course of five months of Antarctic spring and summer – in late 2013 and early 2014 – NASA used both its Terra and Aqua satellites to capture images of the massive floating ice chunk. One of the scientists involved, Grant Bigg of the University of Sheffield, said his team was busy doing research on local ocean currents to try to explain the iceberg’s motion properly. He said, “It has been surprising how there have been periods of almost no motion, interspersed with rapid flow. There were a couple of occasions early on when there might have been partial grounding or collisions with the seafloor, as B31 bounced from one side of the Bay to the other.” 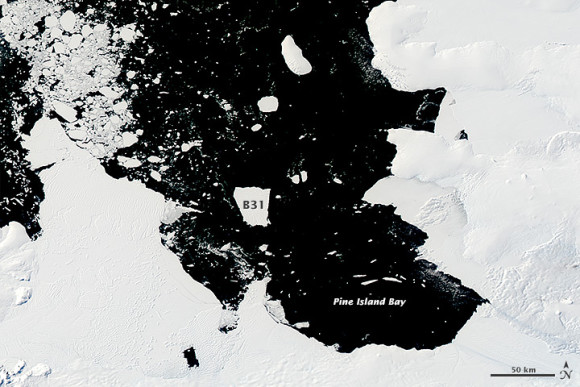 This image was acquired in April, 2014, during Antarctica’s autumn. Since about that time, the iceberg has been impossible to track visually. However, as of November 2014, NASA is tracking the iceberg again with the return of summer to Antarctica.

Bottom line: NASA is tracking the huge iceberg B31, which broke away from Antarctica’s Pine Island Glacier in November, 2013. Winter is now over in the southern part of the world, and acquired its first image in six months of B31 on November 22, 2014.