Scientists are trying to solve the mystery of why a narwhal was adopted by a group of beluga whales in Canada’s St. Lawrence River.

A narwhal swims with a group of beluga whales in the St. Lawrence River. Via Group for Research and Education on Marine Mammals.

By Erin Siracusa, University of Guelph

Since the age of the Roman Empire and the story of how the twins Romulus and Remus were raised by a wolf, tales of interspecies adoptions have captivated the human imagination. The story that emerged from Canada’s St. Lawrence River in July of 2018 was no exception. While researching belugas, a group of scientists captured drone footage of a young male narwhal, more than 1,000 kilometers south of his Arctic home, swimming with a pod of belugas.

It sounds like something straight out of Disney’s “Finding Nemo.” But in the three years since the narwhal was first spotted with his adopted family, this real-life drama has been playing out in the waters of the St. Lawrence estuary. And the unlikely alliance has researchers scratching their heads.

The cause of this consternation? A funny word called adoption.

A narwhal is spotted swimming with a group of belugas in the St. Lawrence River. Image via Research and Education Group on Marine Mammals.

In the human realm, adoption is seen as a benevolent act, but in the wild it poses a real evolutionary dilemma. This is because the goal of every organism in the natural world is to reproduce and transfer its genes to future generations. Adoption is puzzling because it requires an individual to invest resources into another’s offspring, with no guarantee of passing on its own genetic material. Despite this, adoption is well-documented across the animal kingdom.

The question is, why?

Understanding when and where we see cases of adoption often comes down to understanding how adoption can provide a benefit to the foster parents or adoptive group members. In other words, how can investing in another’s offspring actually increase the potential for adoptive parents to contribute genes to future generations?

One possibility is through the adoption of kin.

Since related individuals share genes, by raising family, animals can help to ensure the survival of their own DNA. This is the most widely documented explanation for foster care in the wild. Many social species, including lions, primates and elephants have been known to care for or raise the offspring of a mother, sister, aunt or other relative.

But scientists from the Kluane Red Squirrel Project have found that social species aren’t the only animals that adopt kin. In the icy north of Canada’s Yukon, red squirrel mothers preferentially adopt orphaned relatives. This is intriguing because red squirrels are territorial rodents that live in isolation. Even so, red squirrels were able to identify relatives and actively chose to foster pups to which they were related. Out of thousands of litters, researchers only identified five cases of adoption, all of which were orphaned kin. 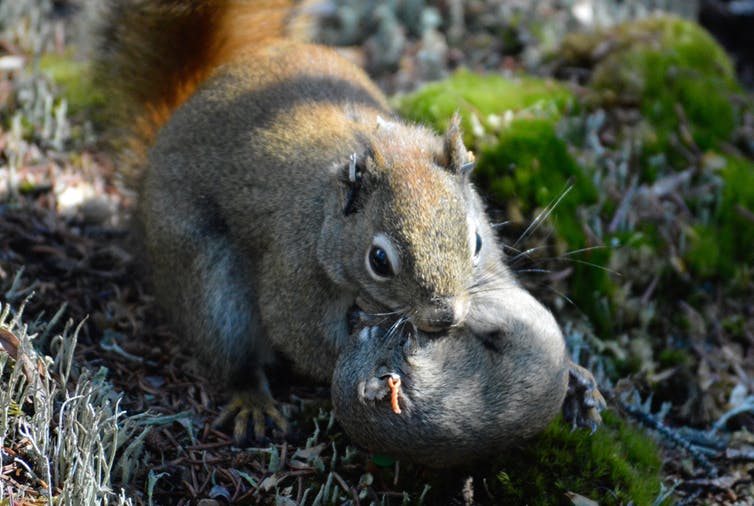 You scratch my back, I scratch yours

But adopting individuals with shared genes isn’t the only way that potential foster parents can benefit. Reciprocity, or an “exchange of favors,” might also motivate shared parenting. Under certain circumstances unrelated females will swap “babysitting” duties. This has the benefit of allowing the mother to forage more efficiently without youngsters tagging along.

Alternatively, mothers might nurse each other’s offspring, providing temporary relief from maternal duties. Scientists are still uncertain, however, how important reciprocity might be for facilitating allonursing – non-maternal milk provisioning – or other forms of foster care provided by non-relatives.

Even more puzzling are circumstances in which adoptions occur between members of different species. Such cases can’t be explained either by shared genes or reciprocity among group members, and while interspecies adoptions are rare in the wild, they aren’t unheard of. For instance, in 2004, researchers in Brazil observed an infant marmoset being cared for by two female capuchin monkeys.

Since interspecies adoptions are so uncommon, it’s challenging to understand why they occur. One possibility is that adoption provides an opportunity for young females to practice their mothering skills. Scientists believe that proficiency in parenting is based on learned as well as innate behaviors.

In elephant seals, experienced mothers are more successful in raising offspring. Researchers think that these benefits of maternal experience may be one reason adoption occurs so frequently in this species. By practicing with adopted young, females can ensure that they are competent mothers when it comes time to raise their own offspring.

Of course, not every instance of adoption is likely to be beneficial for the adoptive parent. One simple cause of mistaken foster care is reproductive error.

Breeding females that have recently lost their young are often still behaviorally and physiologically ready to provide maternal care. In such cases, a female’s motherly instinct may be so strong that it leads her to mistakenly redirect her care toward unrelated young.

Alternatively, parents may simply be bamboozled into raising another species’ young. Brown-headed cowbirds lay their eggs in the nest of an unsuspecting host who, unable to distinguish the cowbird’s offspring, will raise the young as their own.

All for one and one for all?

But in the chilly waters of the St. Lawrence River, a different sort of adoption story is unfolding. The welcoming of a young narwhal into a pod of juvenile male belugas cannot be explained by kin selection, reciprocity or maternal instinct … leaving what?

It’s a good question, and frankly, scientists are still uncertain. One possibility is that adopting a lone individual might provide a benefit for the entire group. For instance, having a larger pod might offer protection from predators.

This “safety in numbers” benefit has been suggested as an explanation for adoption in other species. Alternatively, both narwhals and belugas are highly social animals and the benefits of social companionship alone might lead to this unlikely alliance.

This is particularly true given that narwhals and belugas do not directly compete for food. Narwhals feed on deepwater fish, while belugas prefer surface-dwelling salmon and capelin. The costs of adoption are therefore likely to be low.

In the end, the narwhal’s adoption might be one of the many natural mysteries that scientists have yet to solve. Nevertheless, footage of this long-tusked, gray-skinned cetacean frolicking with its fellow belugas is offering people worldwide a rare glimpse into an animal behavior almost never seen in the wild.

Bottom line: Scientists are trying to learn why a narwhal was adopted by a group of beluga whales in the St. Lawrence River.