More heat extremes across the United States in 2011

Over 140 million people have been effected by the relentless heat throughout July and early August 2011. The heat has broken records everywhere across the United States.

These are not heat indexes, but are actual temperatures recorded on August 2, 2011: 112 F in Tulsa, Oklahoma and Lyon, Kansas. 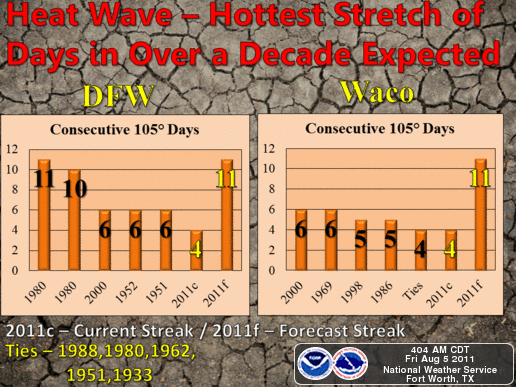 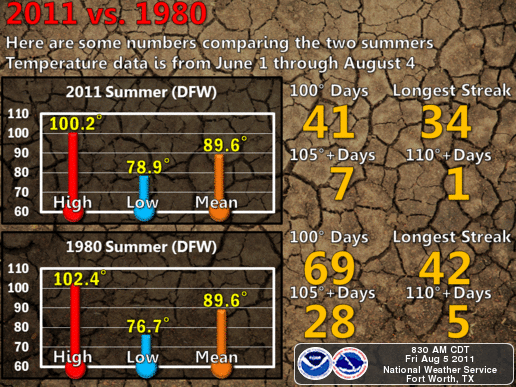 According to the National Climatic Data Center, the month of July 2011 brought 78 all-time record-high maximum temperatures and 209 all-time record-high minimum temperatures.  Across the U.S., at least 65 people have died due to heat-related illnesses, with even more hospitalized. Heat-related deaths occur most often in August when football and marching band camps start up. It is important that parents talk to their children about the heat.  Many football players ignore the signs of heat-related symptoms and continue to work hard until it is too late. Great work ethic is important, but ignoring your body’s call for help is even more vital.

Indianapolis, Indiana experienced the second hottest July since records began in 1871.  Indianapolis has not been this warm since 1936 when the epic Dust Bowl was occurring. They have seen 90+ F temperatures for 19 consecutive days which ties their streak for 90+ days set back in August 8-26, 1936.

Here are a few maps indicating record high temperatures in the central and southeastern United States. Note: circles with an X indicate records being broken. 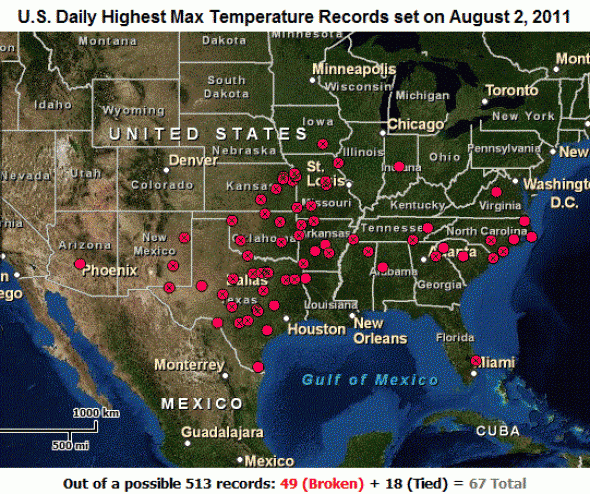 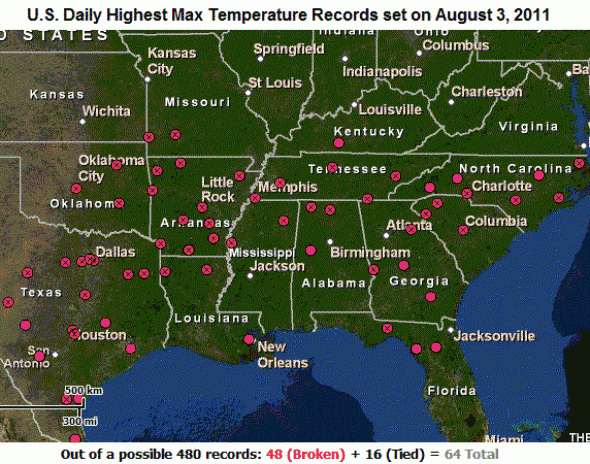 Notable record high temperatures across the United States on August 4, 2011:

The heat wave should diminish a little across the eastern United States as weaknesses will push into the area creating more clouds and rain this weekend.  However,  the ridge of high pressure continues to bake Texas.  The drought and the heat continues as temperatures are forecasted to stay above 105 F for the next five days.

In other news, Tropical Storm Emily dissipated across Hispaniola due to the mountainous terrain which disrupted the storm. Emily could reform in the Bahamas, but is not forecasted to become strong or organized.  The biggest issue associated with Emily were the heavy rains that fell throughout the area.  Over 6 inches of rain likely fell across eastern Cuba, Haiti, and the Dominican Republic.  Mudslides and flash flooding were the immediate concerns, and we all know Haiti does not need this.  If only we could send the rain to Texas!

Tropics remain quiet for now, but the peak of the season is just beginning! Check out what NOAA has to say about the rest of the season.

Have a great weekend!