Earth without its moon would be a very different world indeed. No eclipses. Smaller tides. But the biggest change would be in the length of Earth’s day.

Most moons in our solar system are tiny relative to the planets they orbit. These planets wouldn’t miss a moon or two if one got knocked out of orbit. But Earth’s moon is relatively large. So Earth without its large nearby moon would be a very different world indeed.

Imagine … no solar or lunar eclipses.

No calendars based on a system of months. The word month, after all, stems from a word that means moon. That’s because many calendars are based on the changing phases of the moon.

With no moon, there’d be no nearby world for astronauts to visit. We might never have begun to venture out into the solar system.

The moon and sun together cause the tides. If we’d never had a moon, we’d still have tides, but they wouldn’t be as strong.

What’s more, the moon has a place in human culture. Imagine no romantic moonlight walks – no concept of moon madness, or lunacy.

But the biggest change – for us humans and for other earthly life – would be in the length of Earth’s day. Without a moon, Earth would spin faster. Our day would be shorter. Why?

It’s because, billions of years ago when Earth was young, our planet spun around on its axis much faster. Our world’s cycle of day and night was less than 10 hours long. The ebb and flow of the tides are what put the brakes on Earth’s spin. So – if you’re imagining Earth with no moon – you have to imagine our day on Earth much shorter than our present-day 24 hours. 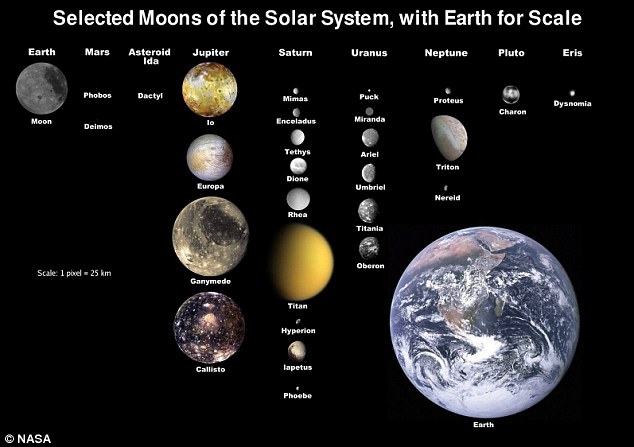 Selected moons of the solar system, with the Earth for scale. Notice that the moon is pretty big relative to Earth. But Pluto and its moon are even closer in size. Image via NASA.

Bottom line: How our planet would be different, if Earth didn’t have a moon.