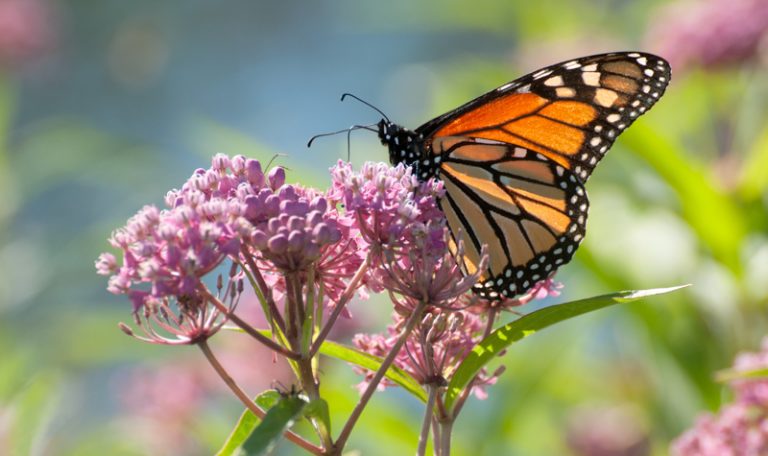 In the past 20 years, the eastern North American monarch butterfly population – a beautiful and majestic butterfly species, beloved by many throughout North America – has plunged by 95%, bringing them dangerously closer to extinction. One strategy to help save the butterflies has been to plant more milkweeds. That’s because, each spring in North America, as monarch butterflies venture north from their wintering grounds, they lay their eggs exclusively on milkweeds, which are the only plants that their caterpillars can eat. But the strategy for milkweed planting has involved roadside parks. And new research reveals that eastern North American monarch butterflies lay three-and-a-half times more eggs on milkweeds located on farmland, in contrast to milkweeds growing along roadsides or in natural areas or urban gardens.

The same new research also shows that the butterflies prefer laying their eggs in small milkweed patches over large ones.

These findings are published in the peer-reviewed journal Biological Conservation. They stem from a two-year survey of monarch egg-laying preferences by graduate student Grace Pitman and her professor, ecologist Ryan Norris at the University of Guelph in Ontario, Canada, and by conservation biologist Tyler Flockhart at the University of Maryland.

Pitman, the paper’s lead author, said in a press release:

The males like to hang out in the larger patches and wait for the females. They tend to harrass them, and if the females are looking to lay their eggs, they don’t want to be harassed.

Roadside milkweeds, on the other hand, were found to have the lowest number of eggs. Ryan Norris commented that the reasons for this were not clear; did the butterflies simply avoid urban roadsides or was it due to the harsher conditions of those locations? He said:

There are a lot of factors that put the monarchs and their eggs and adult females at risk, including getting hit by cars, road salt and the frequent cutting of vegetation.

These findings are significant given that there are currently initiatives under way that involve planting milkweed to help the survival of this butterfly. In some cases, the focus is on roadside planting, which based on these findings is not an ideal location.

A more effective strategy would be to develop incentive programs with landowners to plant and maintain milkweed within agricultural landscapes. 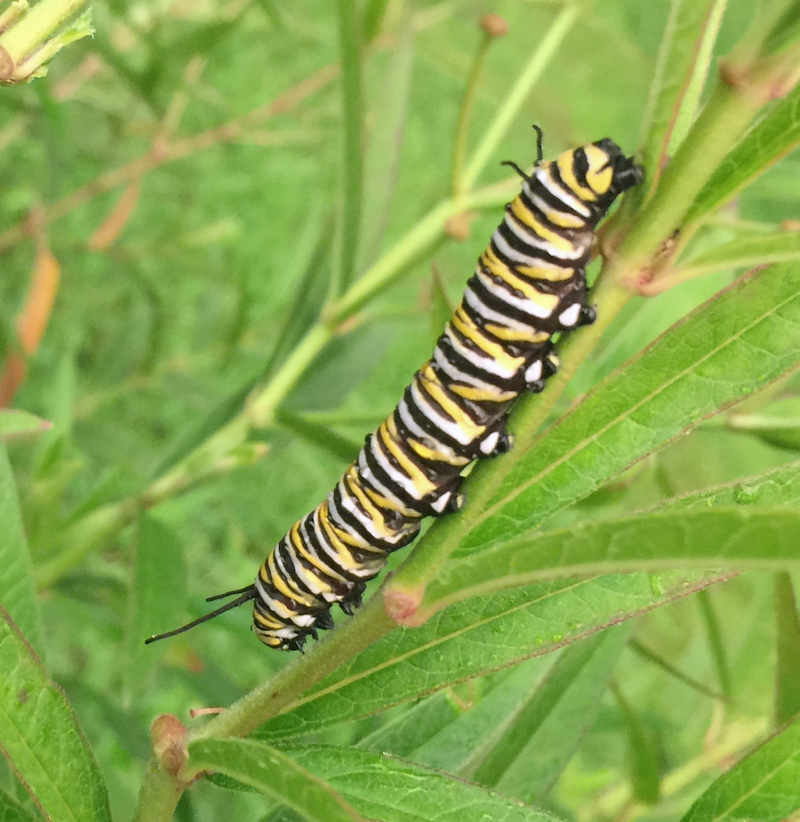 Monarch butterflies in eastern North America undergo long migratory journeys, as much as 3,000 miles. Most overwinter in forests in central Mexico.

In spring, the year’s founding generation moves northward, mating, laying their eggs, then dying. The next generation picks up the next leg of the journey, repeating the butterfly’s life cycle: hatching from an egg, going through its caterpillar stage, undergoing its dramatic transformation in its chrysalis, and finally emerging as a butterfly. This goes on up until the fourth generation.

The first, second, and third generations each have a two- to six-week lifespan, depending on weather conditions. The fourth generation, the final generation of the year, has a nine month lifespan. In late summer, this generation undertakes an extraordinary southward migration over thousands of miles, returning to the wintering grounds of their great-great-great-great grandparents; many of these monarchs spend the winter months roosting in dense colonies in a small area in the mountain forests of central Mexico. On the west coast, monarchs embark on a similar long-distance migration, wintering in forests along the southern California coast. 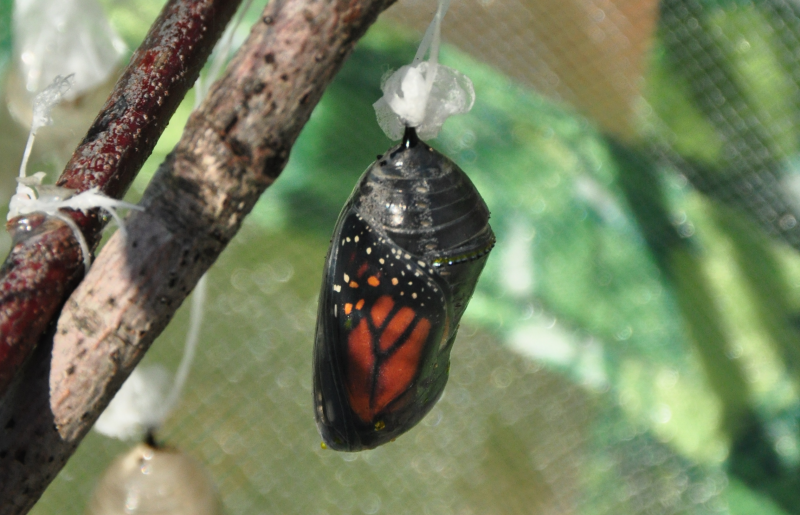 Monarch butterfly just hours from emerging from its chrysalis. Image by Shireen Gonzaga.

Monarch populations in eastern and western North America have undergone significant decline in the past two decades. Habitat loss, due to logging in their Mexico wintering grounds and development in southern California, is one reason. Along their migratory paths, monarch caterpillars face food shortages due to the destruction of milkweed plants in farmlands that use herbicide-resistant crops, and the butterflies themselves are killed by pesticides. There is also concern about the effect that climate change has on the breeding cycle and winter survival of monarch butterflies. 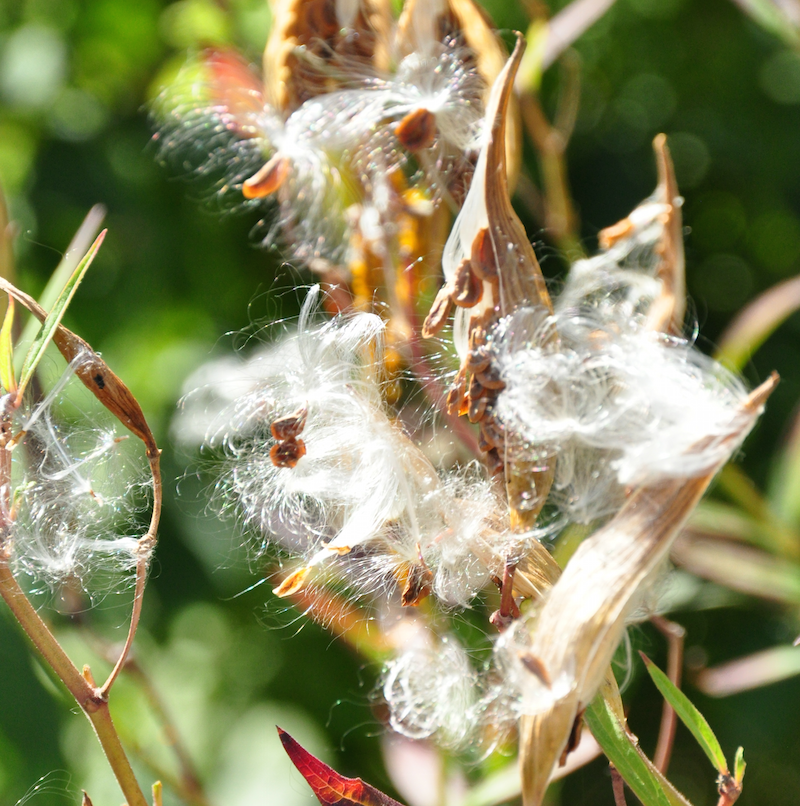 Bottom line: A recent study shows that eastern North American monarch butterflies lay three-and-a-half times more eggs on milkweeds in farmland compared to milkweeds in roadsides, natural areas, and urban gardens. An effective strategy to help save the butterflies from extinction might be to develop incentive programs with landowners to plant and maintain milkweed within agricultural landscapes.