A new study on the 2017 quake that killed 300 in Mexico City finds that both its location and cause were unusual. But seismologists say it could happen again. 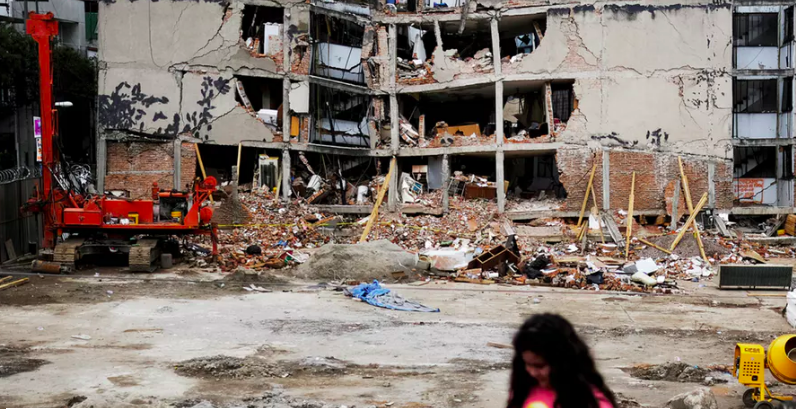 The epicenter of Mexico’s lethal September 2017 earthquake was less than 65 miles (105 km) outside the nation’s capital. Image via Nacho Doce/Reuters.

Six months have passed since a magnitude 7.1 earthquake struck Mexico City, toppling 40 buildings and killing over 300, but the memory remains fresh. Condemned structures dot many neighborhoods, their facades crumbling. And after an earthquake 225 miles (362 km) away in Oaxaca state shook the capital city again on February 16, 2018, the city mayor said hospitals treated dozens of people for panic attacks.

Since the damaging quake, we have been analyzing data from the national network of seismological sensors, as well as high-quality GPS stations around the country. Together, these instruments measure shaking across Mexico. We wanted to know what caused this magnitude 7.1 earthquake and whether a future shock could strike even closer to this city of 20 million.

Here’s what we learned.

People in central Mexico are accustomed to the ground shaking. Since 1980, 40 perceptible earthquakes have hit this region. The September 19 quake actually occurred on the 32nd anniversary of the magnitude 8.1 earthquake that killed at least 10,000 people in and around Mexico City in 1985.

That catastrophe marked an entire generation of Mexicans, including ourselves, back when we were just kids.

Now, as working seismologists, we have discovered that the 2017 earthquake, called Puebla-Morelos, was fundamentally unlike its 1985 predecessor. In fact, it was different than most big Mexican earthquakes, which typically happen along the country’s Pacific coast, where two tectonic plates collide.

The Puebla-Morelos quake occurred well inland – just 70 miles (113 km) south of Mexico City, in Puebla state. Since the 1920s, only five other large earthquakes have originated in central Mexico. 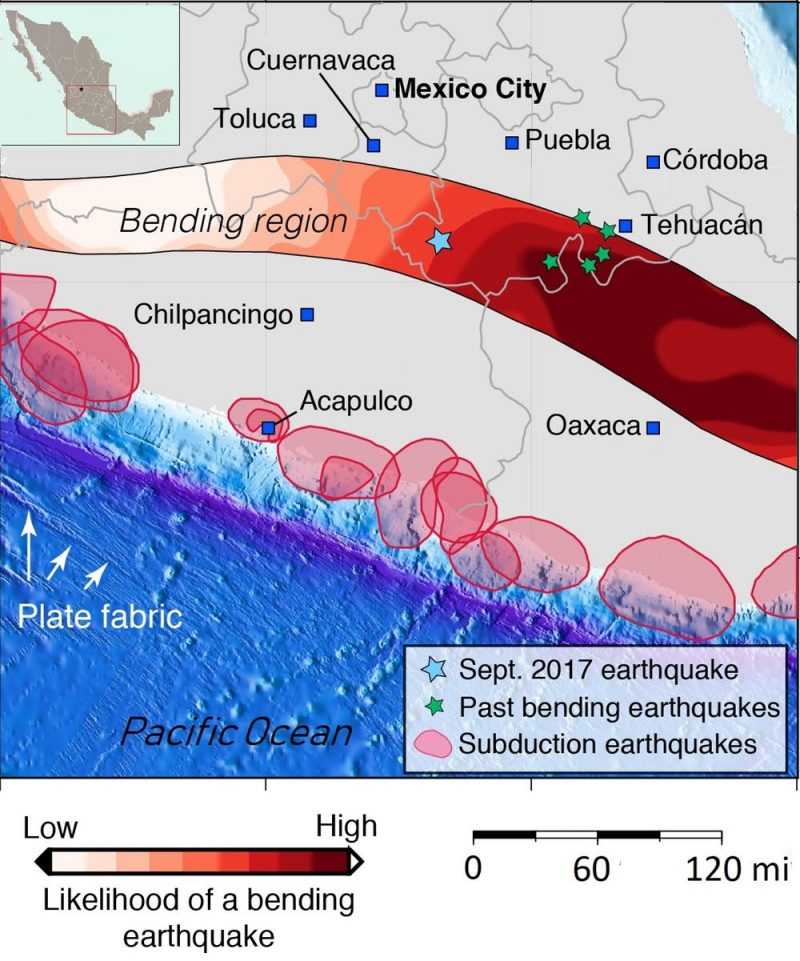 The zone of potential “bending” earthquakes, where the subducted tectonic plate that runs beneath Mexico juts downward at a sharp angle, is a band spanning the country from center to south. Only five earthquakes have struck this region in the past century, including the deadly September 18, 2017, quake that killed 300 in Mexico City. Major earthquakes typically occur along the Pacific coast. Image via D. Melgar.

Most major earthquakes worldwide happen along the unstable intersections in the Earth’s crust, where two tectonic plates – that is, the underground slabs that make up the planet’s rocky shell – collide, one plate sliding beneath the other.

These are called subduction zones, and continued plate movements in those areas are responsible for the world’s largest earthquakes – the kinds that occasionally rattle Alaska, Japan, Chile and Indonesia.

At most subduction zones, after one tectonic plate slides beneath a neighboring plate, it continues on a diagonal downward dive and sinks deep into the Earth’s mantle.

Not in Mexico. There, the initial contact between the two tectonic plates – which collide off the country’s southern Pacific coast – starts off normally enough, with the subducted plate sinking diagonally downwards.

But then, just as it begins to jut underneath the Mexican mainland, the plate – which is made of dense, heavy rocks – reverses course. It bends upward, sliding itself horizontally beneath the plate Mexico sits on top of. This setup continues for about 125 miles (200 km) or so.

Then, underneath Puebla state – just south of Mexico City – at a depth of about 30 miles (48 km) below ground, the subducted plate abruptly changes direction once more. It dives almost vertically downward, plunging itself deep into the Earth’s mantle.

What is a ‘bending’ quake?

When the plate bends downward, some of the rocks in the plate break. Think of a sturdy piece of wood. Flexed lightly, it bends. But when the flexing becomes too strong, it will splinter violently.

This is what causes “bending” earthquakes like Mexico City’s. After the bent tectonic plate snaps, seismic waves emanate outwards from the breaking point, causing the Earth to tremble. The closer you are to the epicenter, the stronger the shaking.

This kind of rare Mexican quake typically has a relatively lower magnitude than the more common Pacific coast variety. But that doesn’t mean the shaking above ground feels weak. Because “bending” quakes strike in Mexico’s densely populated central region, beneath the feet of many millions, the shaking can be very strong indeed.

And when they hit near Mexico City, as September 2017 demonstrated, the consequences can be devastating.

This same, unstable subducted plate runs underneath all central Mexico. And, thanks to
previous studies, we know that it is bent across a large, continuous swath of central and southern Mexico.

It is here – from Michoacán state, part way up the Pacific coast, all the way down to southernmost Oaxaca – that bending earthquakes could occur.

But the tectonic plate’s bend, we learned, is only half of the story behind central Mexico’s shaking. The plate’s texture matters, too.

High-resolution images of the ocean bottom off Mexico’s Pacific shore reveal that the seafloor terrain is rugged in a very organized fashion. There, beneath thousands of feet of water, we see high, narrow ridges and deep valleys that run lengthwise in a northwest-to-southeast direction.

This “fabric” was created about 8 million years ago, when the rocks first formed – way before tectonic plates collided to give Mexico its subduction zone. Even so, the plate’s texture – marked by this linear fabric of underground mountains and canyons – turns out to be relevant in determining where these rare, bending earthquakes might occur. 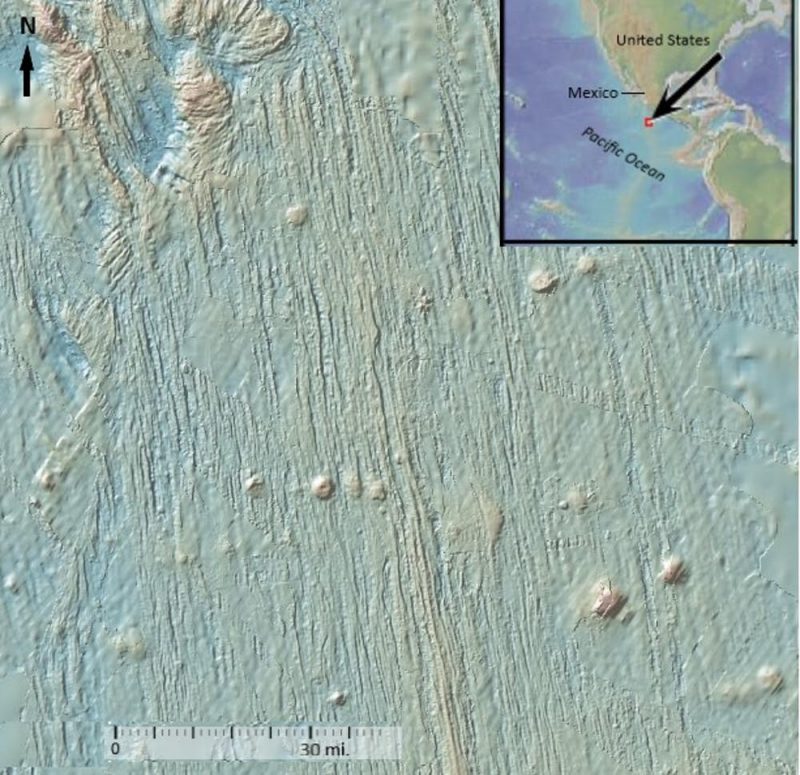 High-resoulution images of the Pacific Ocean seafloor off Mexico’s coast reveals that the subducted plate there has a linear texture comprised of ridges, valleys and bumps. This “fabric” continues when the plate slides beneath the Mexican mainland and then angles downward, plunging itself deep into the Earth’s mantle. “Bending” earthquakes are most likely to occur where the plate bends in the same northwest-to-southeast direction as its ridges and valleys run. Image via Global Multi-Resolution Topography Data Synthesis.

Our research found that because its ridges and valleys are oriented uniformly – think of the grain on a sturdy piece of wood – a tectonic plate is far less likely to snap if the force that bends it is at an angle perpendicular to the direction the fabric runs. Like a sheet of plywood, a tectonic plate is more resistant to pressure when bent against the grain.

In other words, large, damaging “bending” earthquakes are most likely to occur where the subducted plate’s own texture aligns with the direction of its downward bend.

This is good news for cities like Morelia, in Michoacán, where we believe the plate’s fabric runs almost perpendicular to the direction of the plate’s break – the wrong setup for a strong earthquake.

But it is bad news for neighboring Puebla and Oaxaca. There, plate texture and plate bend are almost perfectly aligned – off by less than 10 degrees. Under such circumstances, the bent plate can more easily snap and break from continued tectonic movement.

What’s in store for Mexico City?

The part of the plate bend near Mexico City, where the September 19 quake occurred, falls somewhere in between. The alignment between texture and plate is not perfect – but they’re off angle by just 20 to 30 degrees.

That means the capital could see another large quake. And, based on our analysis, the epicenter could actually be closer to the city: This volatile tectonic band extends as far north as the city of Cuernavaca, 30 miles (48 km) from Mexico City’s southern edge.

These findings are a step forward in understanding Mexico’s complex geology. But we still don’t know how often “bending” earthquakes might happen – whether once a century or every decade. Seismologists worldwide are still far from being able to predict where, when and how the next big one will strike.

What our new study can do, we hope, is help Mexicans nationwide understand what’s happening beneath their feet.

Bottom line: According to a new study, both the location and cause of the 2017 Mexico City earthquake were unusual. But seismologists say another strike is possible.