Places to go: Maldives is the world’s lowest country

Not one of its 1,200 mostly uninhabited coral islands measure more than six feet (1.8 meters) above sea level.

The Maldives – made up of a chain of nearly 1,200 mostly uninhabited islands in the Indian Ocean – is the lowest country in the world. Not one of its coral islands is more than six feet (1.8 meters) above sea level, making the country vulnerable to a rise in sea level associated with climate change. I guess that’s why I found this video so poignant. 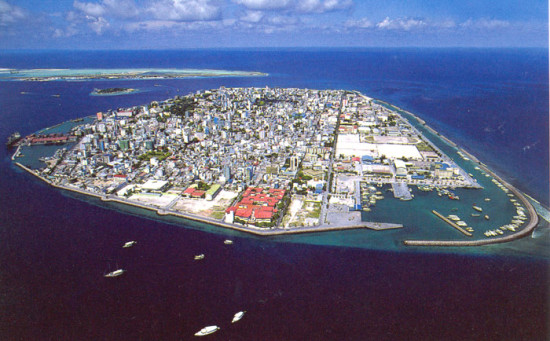 This is Male, capital of the Maldives. According to the BBC: “Aside from the island capital Male, outsiders are only permitted onto inhabited islands for brief visits, thereby limiting their impact on traditional Muslim communities. Most tourists are taken straight to their island hideaway by seaplane or speedboat, where they are free to drink alcohol and get luxurious spa treatments, insulated from the everyday Maldives, where alcohol is outlawed and skimpy beachwear frowned upon.”

An Islamic republic, Maldives has been building its tourist industry in recent decades, and, according to the Financial Times this week, it reached its targeted one million visitors mark by the end of 2013.