Magma rising inside Mount St. Helens, but no eruption expected

There has been uplift and minor earthquake activity on Mount St. Helens, an active volcano in Washington state, but there are no signs that it is about to erupt. 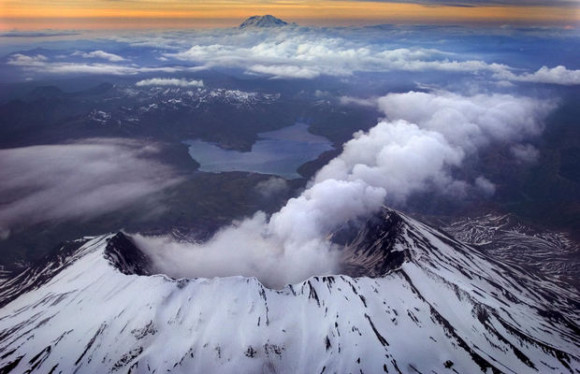 Mount St Helens looking north with Mount Rainier and Spirit Lake in the background on the evening of May 3, 2005, during the volcano’s last period of activity. Steam is rising from the mountain. Photo by Bruce Ely/The Oregonian via OregonLive. 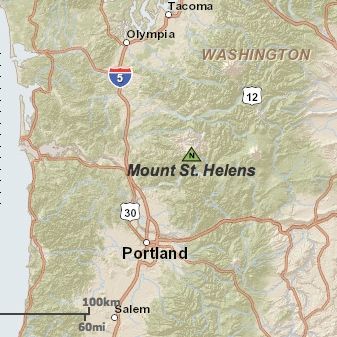 Late last week, the Cascades Volcano Observatory released an information statement, in which it mentioned that Mount St. Helens, an active volcano in southwest Washington state notorious for its large 1980 eruption, is showing signs of the ongoing re-pressurization of its magma reservoir. There has been uplift and minor earthquake activity. However, there are no signs that the volcano is likely to erupt anytime soon, U.S. Geological Survey scientists told various news media last week. Erik Klemeti at Wired’s Eruptions blog said:

The volcano in southern Washington has been quiet since the last eruptive period ended in 2008 following four years of dome growth within the 1980 crater. However, just because a volcano isn’t erupting doesn’t mean that there aren’t things happening within the magmatic system below the volcano. The USGS reports that the volcano has slowly been inflating … since the 2004-08 activity ended and when combined with the low-level seismicity that has been occurring, they think that the magmatic system is slowly refilling at depths of 4-8 kilometers [about 5 miles] below the surface.

This is giving long-term (data) that it’s getting ready to erupt again, but it could be decades before it does something again.

The catastrophic eruption of Mount St. Helens on May 18, 1980 killed 57 people. It was the deadliest and most economically destructive volcanic event in the continental United States in U.S. history. The 1980 eruption knocked down a forest and filled the sky and rivers with volcanic ash.

Bottom line: There has been uplift and minor earthquake activity on Mount St. Helens, an active volcano in Washington state. However, there are no signs that the volcano is about to erupt, and the next eruption could be decades away.