Listen to the world’s loudest bird

Biologists report that the white bellbird, which lives in the mountains of the Amazon, has shattered the record for the world’s loudest bird.

Biologists report that they have recorded the loudest bird calls ever documented, made by male white bellbirds as part of their mating rituals in the mountains of the northern Amazon.

White bellbirds typically live in the high mountains of northern Brazil and southern Venezuela. The males are bright white with a striking black bill that has a wattle dangling from its top. Females have green plumage accented with streaks of brown.

Mario Cohn-Haft of the National Institute of Amazonian Research in Brazil is co-author of the study, published October 21, 2019, in the peer-reviewed journal Current Biology. Cohn-Haft told the New York Times:

You can hear them from a mile away.

The white bellbirds have two song types, said the researchers. The first is relatively common and can reach around 116 decibels. (Normal human conversation, by way of comparison, clocks in at about 60 decibels.)The second song, which males emit when females are around, reached levels of around 125 decibels.

How loud is that? Standing beside a siren clocks in at 120 decibels. Biologist Jeff Podos at the University of Massachusetts, lead author of the study, said the songs are so deafening they reach decibel levels equal to the loudest human instruments, like the hammering of a pile driver. 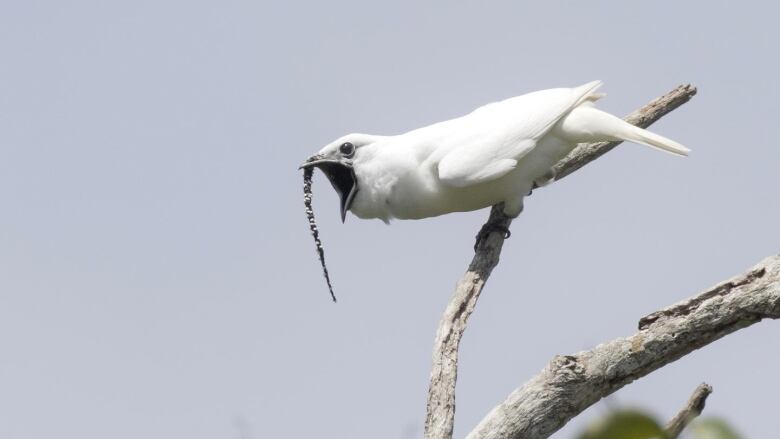 The researchers note that it’s actually hard to describe how loud the bellbird’s call is, because it’s difficult to compare sounds from different distances. But the calls are so loud, they wonder how white bellbird females listen at close range without damaging their hearing. Podos said:

We were lucky enough to see females join males on their display perches. In these cases, we saw that the males sing only their loudest songs. Not only that, they swivel dramatically during these songs, so as to blast the song’s final note directly at the females. We would love to know why females willingly stay so close to males as they sing so loudly. Maybe they are trying to assess males up close, though at the risk of some damage to their hearing systems. 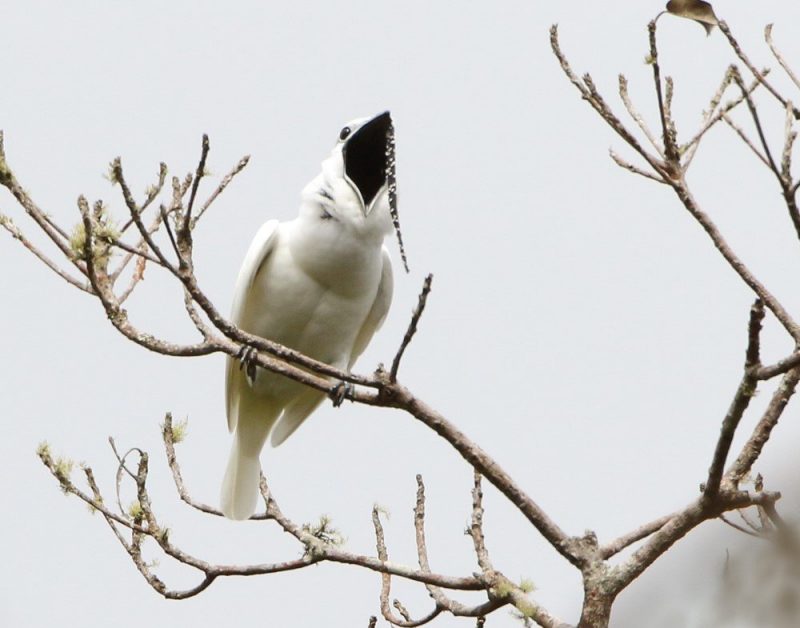 For the research, the biologists used high-quality sound recorders plus special sound-level meters and high-speed video to slow the action enough for study.

The biologists aren’t sure how these birds can be so loud. Podos suggested that it might due to their wide beaks, which they use to swallow fruit whole. Other adaptations such as breathing musculature, head size, and the shape of the throat might influence the birds’ unusual aptitude as well. Podos said:

We don’t know how small animals manage to get so loud. We are truly at the early stages of understanding this biodiversity.

Bottom line: Listen to the song of the world’s loudest bird, the white bellbird.

Via University of Massachusetts