Lifeform of the week: Vampires are real!

You might think twice about walking down that dark alley alone after learning about the nefarious habits of the vampire bat, squid and finch.

Happy Halloween! The best holiday of the year happens this week, and it is time to party. But before you rush off to put the finishing touches on your costume (or your kid’s costume … or your dog’s costume) I think we should have a talk about vampires. Nosferatu. The undead. Vampires: those cunning, nocturnal fiends, with glowing eyes as piercing as their sharp fangs. In a whirl of swishing capes and European accents, they seduce the innocent and feed upon their blood. At least that’s how it usually works in the movies. But have you considered the vampires of the real world, right here in the animal kingdom? Because you might want to think twice about walking down that dark alley alone after you learn about the nefarious habits of the vampire bat, the vampire squid, and (queue mid 20th century horror film music) the vampire finch. 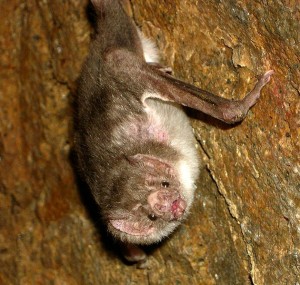 While you may expect them to hang out in Transylvania, common vampire bats (Desmodus rotundus) are only found in the Americas, particularly in tropical and subtropical areas. They’re also smaller than you might imagine. Far from the massive beasts that we see when movie vampires transform themselves into bats, vampire bats are dainty things that only weigh only a few ounces (though this can increase considerable after they suck down some blood).

The common vampire bat dines exclusively on blood, generally obtained from sleeping mammals under the cloak of night. With blood of living animals being the main courses every night, vampire bats are equipped with stealthy adaptations for such a mission. As with other bats, echolocation guides the vampires to their food source, but it is specialized heat sensors on the species’ nose that enable them to find a vein to sink their sharp teeth into. These vampires don’t actually suck blood, rather they lap it with their tongues. An anticoagulant in their saliva helps ensure a hearty meal without the sleeping victim’s blood clotting.

Ever careful not to wake their food supply, vampire bats will often land near rather than on their victims, and then softly creep aboard. As a result they’re better on their feet than non-vampire bats. They can walk and even run on land, in addition to the standard batty flying. 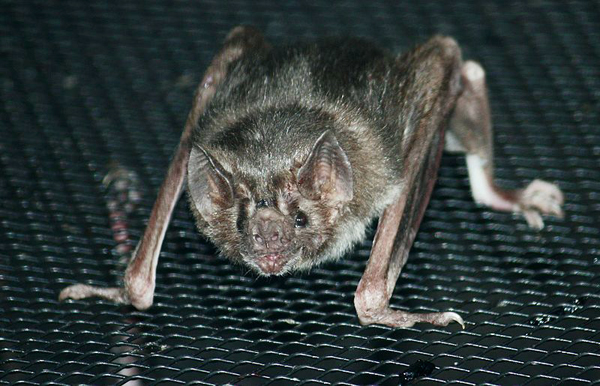 Unlike the solitary, brooding vampires of fiction, vampire bats roost in large colonies. They even share with their neighbors. An individual’s nightly hunt doesn’t always draw blood, and, lacking fat reserves, vampire bats can starve in just a few days. If a hungry bat pleads to his fellows, a resident of the colony may (literally) cough up some blood for the luckless hunter, especially if that individual has provided a similar favor in the past.

Vampire bats were slow to make their way into supernatural stories. European vampire lore existed well before the discovery of these new world bats (remember none of the three species of vampire bat are native to Europe). In other words, vampire bats were named after vampires, not the other way around.

Many people would instantly disqualify the vampire squid from any battle of the vamps for one reason: it doesn’t actually drink blood. But is vampirism just about sanguivory?† In terms of Bram Stoker spawned lore, this strange cephalopod has ample vampiric traits to earn its name.

The scientific name alone – Vampyroteuthis infernalis– which translates into “vampire squid from hell,” certainly suggests that someone was impressed by its creepier qualities. That someone was German biologist Carl Chun, who described and named the unusual marine creature in 1903. 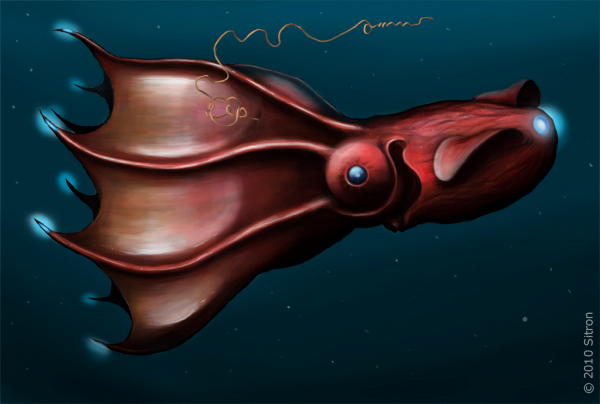 Just as vampires can’t be seen in mirrors, the vampire squid doesn’t show up in internet photo searches. So you will have to settle for a drawing of the elusive beast. Image Credit: Citron.

In addition to not being a bloodsucker, the vampire squid is not a proper squid. It shares characteristics with both squid and octopi, much as fictional vampires teeter on the borderline between living and dead. Its eight arms are webbed together, giving it the appearance of wearing a long, flowing cape. And, just like Dracula, the vampire squid can wrap the cape around itself. Though it likely does so to confuse predators rather than surprise prey. When threatened, the vampire will invert its cape to cover its head, an effect sometimes described as “turning itself inside out”.

Cloaking itself is not the squid’s only vampiresque magic trick. It can also vanish. Well, at least with the aid of a distracting light show. The animal’s body has several light-emitting organs, near its fins and eyes, as well as dotting its skin. Additional bioluminescence can be produced by the tips of the arms. If the squid needs to make a quick getaway, the arms can also shoot a luminous fluid (sort of like how ordinary squid shoot ink). A cloud of light conceals the squid from its predators just long enough for it to retreat into the blackness of the ocean, seemingly disappearing into thin air (or, in this case, water).

The eyes of the squid too have a supernatural look to them. Since it lives in the darkness of the deep sea, the vampire squids eyes are rather large and eerily reflective. Depending on viewing conditions, their color can appear as a ghostly blue or a infernal glowing red. 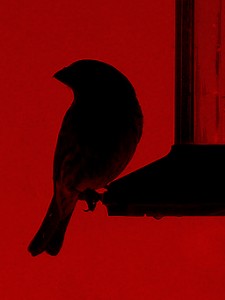 The vampire finch too is has evaded many a camera, so please accept instead my artistic interpretation of this non-vampiric finch. Image Credit: Larry Page.

The diverse Galapagos Island finches are frequently used as a teaching example of how natural selection can result in species variations.‡ As the story goes, they all are believed to have descended from a common ancestor, but have since radiated to fill the islands’ many ecological niches. Some eat cactus fruit, some eat insects, etc., etc. But few biology teachers bother to mention that one subspecies of these famous finches sucks the life blood of other birds. 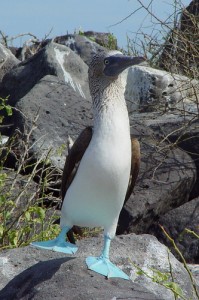 The blue-footed booby, too trusting for its own good. Image Credit: Peter Gene.

Unlike vampire bats, the vampire finch doesn’t live on blood alone. However, it does on occasion use its sharp beak to pierce the skin of larger bird, mostly the boobies that also inhabit the Galapagos. It is theorized that this bird on bird pecking started out as a more symbiotic insect removal (with the finches obtaining nourishing bugs while the boobies benefited from the grooming), and later evolved into the outright parasitism currently exhibited by the vampire finch. Somehow the boobies (picture) have failed catch on and continue to lose not only blood, but also eggs to the insidious finch, which poaches these as well.

Curiously, vampire finches are found only on those Galapagos Island that lack larger birds of prey (namely owls and hawks). It is possibly this relative safety that motivated the vampire finch to cozy up to the booby – a large but all too gullible bird.

In case you’ve lost track of the details amidst the commotion of capes and fangs, I’ve made a table to help us summarize the attributes of the three creatures discussed. Double plusses indicate a particularly strong showing in a given category:

Well, now that you know what you’re up against, go out into the night and have fun. Just don’t forget your garlic, stakes and holy water.

† Congratulations, you now know a fancy word for blood-drinking. Here’s another one as a bonus: hematophagy. Keep those handy for next time you’re complaining about mosquitoes on a hike, “Ach, these sanguivorous monsters! Will this hematophagy never end?!”

‡ It should be noted, however, that the finches were not of particular interest to Darwin himself. In his famous On the Origin of Species, he ignores the birds in favor of other examples such as tortoises.

In the illustration at the top of this post, we thank the following for their images:
Carl Chun for the squid drawing

Larry Page for the finch photo