Lifeform of the week: Sea stars

You call them starfish? They’re brilliant by any name.

I’m not sure exactly when starfish began insisting on being called “sea stars”, but somewhere along the line they got it into their heads (or central disks perhaps, they don’t have heads per se) that since they are not actually fish, they should no longer be addressed as such. This despite the fact that prairie dogs and sea horses are graciously carrying on with their misleading monikers to spare society the trouble of learning new names.

Fair enough, little Asteroids (no joke, sea stars belong to the taxonomic class Asteroidea) you’re definitely not fish. Really, sea stars bear no resemblance to fish. Shape-wise some species even test the limits of the word “star”. Yet for something that looks more like a decorative paperweight than an animal, sea stars have done well for themselves, with close to 2000 extant species and representation in all the world’s oceans.

Nothing fishy about it
Radial symmetry is the first giveaway that sea stars are something far from fish. Sea stars lack the left side/right side bilateral symmetry of many familiar animals (humans, for instance). Instead, their bodies are formed around a central disk with arms radiating outward. It’s a good set up for slow moving animals that can’t easily whip around to face predators, prey or whatever else the action is.

So many styles to choose from. Image Credit: (left to right) Nick Hobgoog, quinet, Ed Bierman

They’re not exclusively radial however. Sea star larvae have bilateral symmetry before developing into the mature star shape. An exception to this pattern is the cushion star (Pteraster tesselatus), which skips the bilateral larval stage and just sprouts its radial arms straightaway. 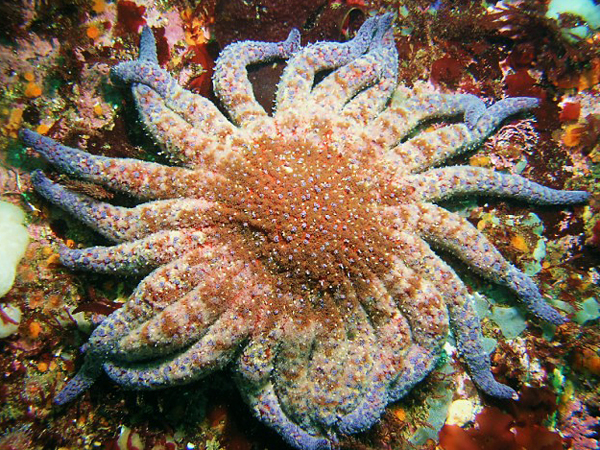 Most sea stars exhibit the classic five point star configuration, but others begin with that modest number and continue to add arms as they mature, sometimes topping 20 limbs by adulthood. The aptly-named sunflower star (Pycnopodia helianthoides) is one of the more heavily armed species, as well as one of the largest, growing up to a meter in diameter (3.3 feet).

Lack of blood is another sea star oddity. They don’t need the stuff. Instead they employ a water vascular system, which is unique to their phylum (Echinoderms). Water enters through a filtered opening on the top of the star called the madreporite and then flows through canals into the limbs, distributing nutrients to the rest of the body.* 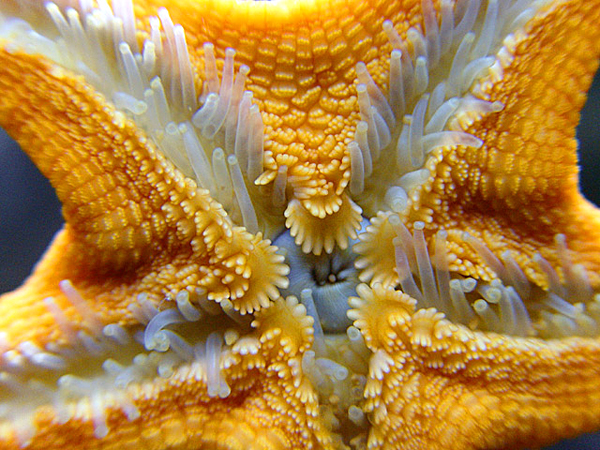 Having water flowing through their arms also helps sea stars to locomote, albeit at a modest pace. Their underside is dotted with tiny tube feet. These are fitted with suction cups that can – with the aid of hydraulic pressure from the water vascular system, plus some more standard muscles – attach and detach to surfaces, allowing a sea star to propel itself. Champion athletes like the sunflower star can allegedly attain speeds of over one meter per minute using this technique. That translates into 0.06 km per hour (0.037 mph). Admit it, you’re impressed. 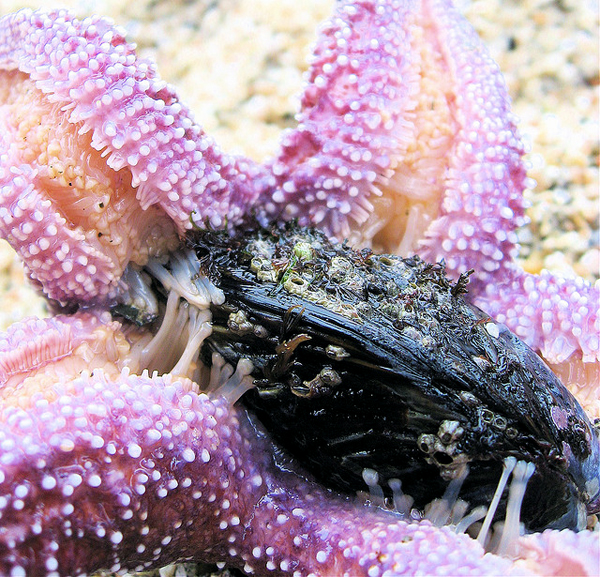 Shells? No problem. Image via jurvetson.

Seafood diet
Most sea stars are generalist predators. Basically, they consume organisms that are too slow to evade them (e.g. mussels, sea urchins). Some species will also eat otherwise faster creatures that have been conveniently slowed by the fact that they are dead or dying. There are even those sea stars, Solaster dawsoni for instance, that dine on other species of star. Hey, it’s a star eat star world.

Many species of sea stars like to start the digestive process externally by inverting their stomach and pushing it out through their mouth and onto their food. The stars’ tube feet are also a helpful hunting tool as they can be used to grasp prey and pry open the shells of hiding mollusks.

The digestive system is pretty basic. A sea star’s mouth is on its underside, and the anus is on the upper side. A short digestive tract connects the two, food goes in through the bottom and waste comes out from the top. It may sound a bit backward from a bilateral perspective, but it seems to do the trick. 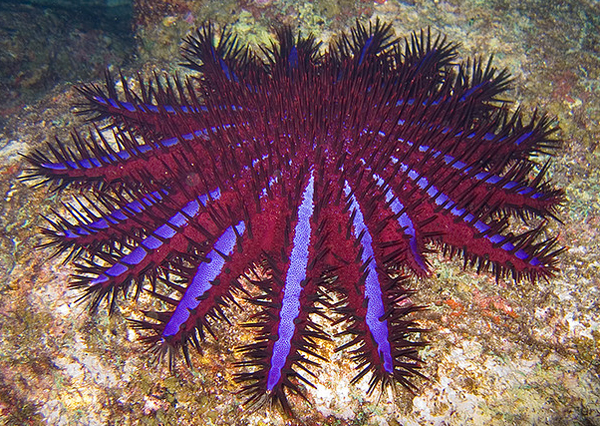 Going after slow moving prey has its downsides. The crown-of-thorns sea star (Acanthaster planci) is famous/infamous for its taste for coral reefs. Population booms of these prickly stars can do a number on delicate reef ecosystems, rendering the crown-of-thorns something of a saltwater pariah. † But perhaps, as the saying goes, there’s no such thing as bad publicity.

Seeing stars
Lack of a proper face notwithstanding, sea stars are not blind. The tip of each arm bears a light sensing eye spot. The light sensors aren’t exactly precision eyes. It’s not like sea stars can read bottom line on the optometrist’s chart or anything. But eye spots allow them to perceive light and dark, and thus movement. And their location on the arms provides a handy panoramic view of the surroundings – another advantage of radial symmetry.

A star is born 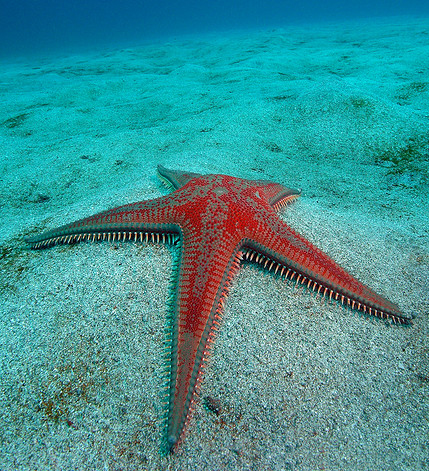 Not surprisingly for a creature with limited movement and incased in a tough, calcified armor, sexual reproduction among sea stars usually involves external fertilization. (Asexual reproduction can occur too, but we’ll get to that in the next section.) Gonads are housed in the arms and produce gametes to be released into the water. Most sea star species have male and female individuals, but some are hermaphroditic (with single individuals capable or producing both sperm and eggs). Some species are even sequential hermaphrodites, like Asterina gibbosa, which starts out male but switches to female when it grows larger.

Party tricks
Check this out; when a sea star loses an arm, it can grow another one. The hard-to-wow reader is likely saying, “big deal, a lobster can do that too.” Well can your hotshot lobster also grow an entire new lobster from just the severed claw? I thought not. While not every species of sea star can regenerate from just an arm, and you certainly should never try this at home, it does occur and it’s pretty cool. 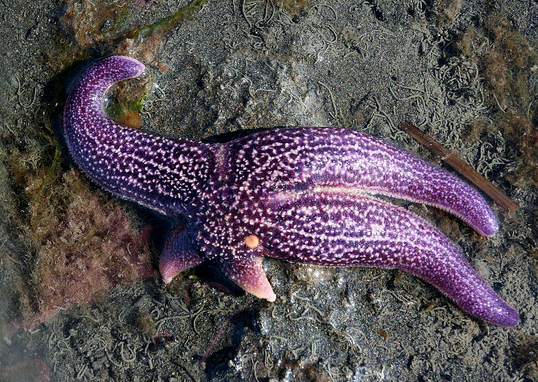 A pair of replacement arms in the works. Image via Dean Franklin.

* The madreporite is not dead center on the stars’ top, but rather off to one “side” – a bit of a chink in the radial armor.

† You don’t want to step on a crown-of-thorns star either, as those sharp spines also contain venom.