Lifeform of the week: Fishing cats

Boldly going where few cats have gone before: into the water.

As a teenager, I volunteered at the local animal shelter. One of the tasks I performed there was assisting in the bathing of newly acquired cats and kittens. From this I learned two important pieces of information: 1) cats hate water and 2) they will gladly claw your face off to escape a bath. Many wild felines also display a lack of enthusiasm for getting wet, but not the fishing cat. This species regularly and willingly enters water. They swim, they dive and, most importantly, they catch fish – thus earning them their common name.

At first glance, fishing cats bear some resemblance to the water-loathing domestic cats we dunked into tubs at the shelter. But the tabby cat stripes on their heads give way to a spotted coat more evocative of a leopard, and they’re closer in size to a bobcat than to a house cat. Male fishing cats are considerably larger than females, averaging 15 kg (33 lbs) and 5 kg (11 lbs) respectively. Both genders have stocky, muscular proportions. Their legs and tails are relatively short, and their small ears can be tucked close to their heads when in the water.

The fishing cat’s partially webbed feet are sometimes cited as an adaptation to its aquatic lifestyle, but such webbing is also common in cats that eschew water. More unusual are the cat’s claws. The claws of most felines are fully retracted into their paws when not in use. But fishing cats’ claws are only partially sheathed and protrude from their paws like exposed fishing hooks.

The cats’ vocalizations are also a bit of an oddity. While the repertoire includes some cat-like meows, fishing cats also produce staccato growling sounds that might best be described as barks. 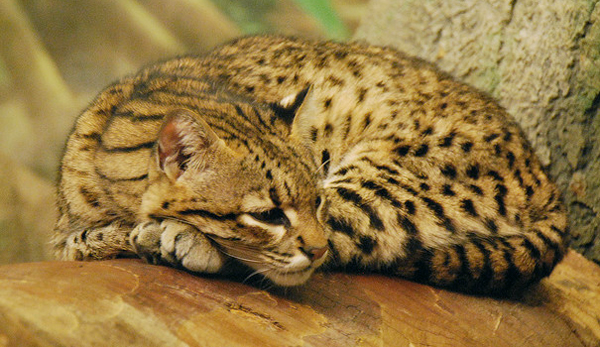 Dive dining
As you likely surmised, fishing cats are quite comfortable in the water.* They’re skilled swimmers, even in deep water and for longer distances. Their short tail can be used as a rudder for better steering.

While they may also sometimes partake of small mammals, reptiles and birds, it is of course fish that make up the bulk of the fishing cat’s diet. The species hunts mostly at night, stalking and pouncing on its prey much like land-dwelling felines, except that it does so while up to its neck in water. To snatch fish from their aquatic home, the cats dive at their prey with teeth bared or swat them out of the water with their sharp front paws. They’ve also been seen tapping the water’s surface, a behavior some say is designed to attract fish by making it appear as though tasty insects can be found above.

Fishing cats are found in southern and southeastern Asia – including parts of India, Sri Lanka, Thailand and Indonesia – but their distribution is patchy. They live primarily near wetlands, slow moving bodies of water such as swamps and marshes being their optimum habitat.

The degradation of wetlands is the major threat to fishing cat populations. Human draining of these habitats for use in food production such as farm-raising of shrimp is swallowing large swathes of the cats’ terrain.

Fishing cats are listed as endangered, and conservationists are working to protect the cats and the wetlands they need to live and hunt. One piece of good news is that fishing cats inhabit some of the same environments as tigers, so conservation efforts on behalf of this larger, more famous feline may also benefit the fishing cat.

* Several other species of wild cats also defy the stereotype the felines can’t stand water. Tigers are the most well known of the swimming kitties.