Lifeform of the week: Carnivorous plants

Faced with lousy soil conditions, some plants came up with a novel solution – eating meat.

In my introductory biology class we learned about a fairly simple concept known as the food chain. It consists of “producers” (plants) that magically make food out of sunlight, and “consumers” (the rest of us) who eat the plants, or eat animals that ate the plants, or animals that ate the animals that ate the plants, and so forth. Clearly, carnivorous plants skipped class that day, and later in the week they cut the food chain lunch line and starting consuming animals. Plants that eat animals may sound like a sick prank, but natural selection made this joke on at least six separate occasions, leading to the evolution of a diverse array of carnivorous plants, some of which are capable of ingesting an organism as large as a rat. They may look all stationary and defenseless, but don’t be fooled. Carnivorous plants would eat you if they had the chance. 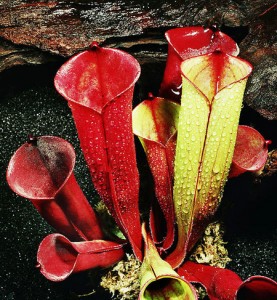 What made these plants scorn decency and natural order and adopt such an aberrant lifestyle? Well, like everything else out there, they’re just trying to get by. As with their more traditional relatives, carnivorous plants fuel themselves by via photosynthesis. This process requires not only sunlight, but also water, carbon dioxide (obtained from the atmosphere), and various elemental nutrients such as nitrogen. Normally, plants get these nutrients from the soil through their roots. But soil quality isn’t always that fabulous, with areas like bogs and other wetlands offering only scant quantities of nitrogen. Carnivorous plants have evolved in such environments to supplement nitrogen by eating animals (mostly insects).

But there is a trade-off to this clever adaptation. Insect consumption requires energy, both in trapping and digesting of prey, which leaves less energy for the photosynthesis that all this bug-eating is supposed to be powering. In fact, carnivorous plants photosynthesize at significantly lower rates than regular plants. Thus the second condition that favors the evolution of meat-eating in plants is ample sunlight. And indeed, the waterlogged homes of carnivorous plants are soaked in sun, allowing even the most inefficient photosynthesizers to thrive, provided they obtain those elusive nutrients.

Since plants are incapable of chasing down their supper, they must instead lure prey and assure it cannot escape. There are 5 varieties of trapping devices employed by these crafty plants – known as snap, pitcher, flypaper, bladder. and lobster-pot traps. 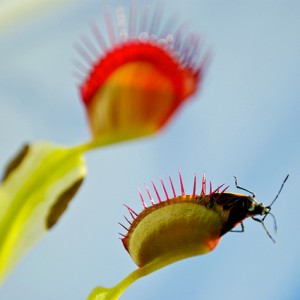 Catching bugs is a snap when you've got the right trap. Image credit: Derek Gavey

Snap traps are the method used by the best publicized of carnivorous vegetation; the Venus flytrap.* As the word “snap” implies, this method relies on rapid movement. The flytrap has 2 lobes that sit poised in a convex configuration and are lined with several trigger hairs. If an insect trips the hairs, the lobes quickly invert from convex to concave, forming a prison around the unsuspecting prey.† The closed lobes also create the digesting arena, into which enzymes are released. It takes about a week for the enzymes to do their work, after which the trap re-opens for business. 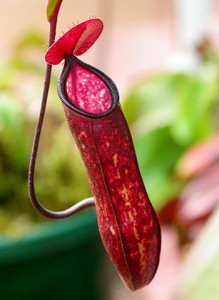 Pitcher plants are my favorite of the carnivores. Their traps, also known as “pitfalls,” rely not on motion but on creating a landscape that is both enticing and inescapable. The shapes are varied. Some look like champagne flutes, others like condoms misused as water balloons, but the basic idea is the same: the plants form a vessel filled with digestive enzymes into which prey fall. The opening to the pitcher may be adorned with floral colors or sweet nectar. Most importantly, it is slippery, assuring a quick descent into the sticky quicksand contained within. While insects are the most commonly caught food items, large pitchers sometime gather reptiles and even small mammals. 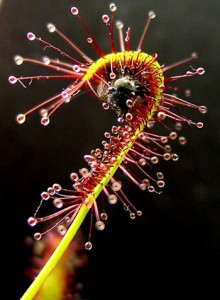 Flypaper traps are another popular choice among bug-loving plants. They work similarly to the flypaper you can purchase at the drugstore to control household pests (if you don’t mind a bunch of dead flies hanging from your ceiling, that is). Glands on the plants’ leaves ooze the necessary glue for insects to stick to, as well as digestive enzymes. Some variants, like the sundews, are able to move their sticky tentacles in order to more fully envelope their prey. The liquefied remains of the insects are absorbed through the same surface that ensnared it.

Bladder traps, another technique involving plant motion, employ suction to pull prey into their digestive cavities. Such underwater traps exist in plants of a single genus, Utricularia, the bladderworts. The fava bean-shaped bladders pump out water, creating a vacuum within. When a potential meal is detected, a trap door swings open sucking in everything in the near vicinity before slamming shut again. The prey is digested and the water is pumped back out, again forming a vacuum to catch the next victim. 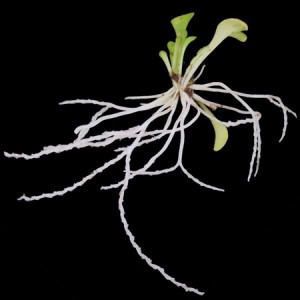 The upper and lower structures of a corkscrew plant. Image Credit: Noah Elhardt

Unique to the genus Genlisea, called corkscrew plants, the lobster-pot trap works on the principle of an easily spotted entrance but no visible exits – not unlike a suburban shopping mall. The above-ground leaves of these plants conceal a labyrinth of root-like subterranean tunnels. Insects wander into these, get lost, and die somewhere in the food court. The spirals forming the lower portion are lined with inward-facing hairs that prevent insects from reversing direction and going out the way they came in.

How can a Venus flytrap move fast enough to catch a fly when it doesn’t even have muscles? For those carnivorous plants that depend on speed, the traps are powered, at least in part, by water. The flow of water within the plant can cause shrinking and swelling of certain portions. In a small plant, like the waterwheel (another snap trapper), water alone can be enough to create the rapid lunge needed to capture prey. Larger plants use small water-powered motions to trigger traps that rely on built-in instabilities, like the low-pressure vacuum of the bladderwort or the forced convex configuration of the Venus flytrap. These unstable shapes can be built up gradually and work like stretched rubber bands, ready to snap at the lightest touch. 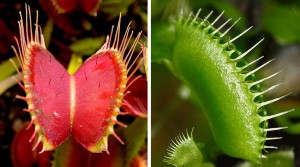 Of course all this quick motion must also be well-timed if it is to procure the equally quick-moving insect. Prey contact with trigger hairs on the plant provides the stimulus to get the process started, conveying the information through an electrical signal. This is similar to communication in neuronal and muscle cells of animals like ourselves.‡

Plant movement isn’t altogether uncommon, nor is it restricted to trapping bugs. Some plants use motion that is literally explosive to spread seeds or pollen.

And what about pollination? 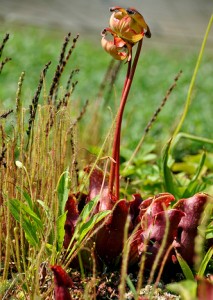 If you’re wondering if carnivorous plants rely on insects for pollination, the answer is yes. And this can potentially create conflicts. How do such plants avoid biting the hand that feeds them (or, in this case, the hand that facilitates their reproduction)? Most plants have taken care to keep the activities of dining and pollination separate, either in space or time. Traps and flowers may grow in different seasons or just on separate locations on the plant. It also helps to have enough difference in size and shape between traps and flowers to attract different insects to visit each.

A carnivore of one’s own

In case you didn’t learn your lesson from the film Little Shop of Horrors, you can grow carnivorous plants in your own home. Just make sure you purchase them from a legitimate grower, since some of these plants have been over-collected to the point of near extinction. Illegal poaching of Venus flytraps in North Carolina was enough of a problem that the state’s Department of Agriculture started spraying the plants in the wild with an allegedly harmless dye that glows in UV light, making it possible to tell if flytraps for sale were illegally swiped. 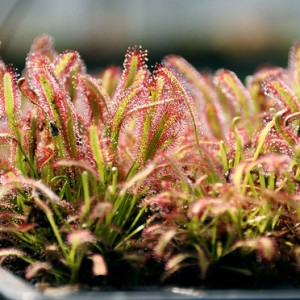 And if you’re new to raising fancy plants, it’s best to start with those that aren’t too demandingly tropical. Wikipedia lists the Cape sundew as “very tolerant of maltreatment.” Now that’s my kind of plant.

* Despite its name, the Venus flytrap dines mostly on ants, spiders, beetles, and grasshoppers.

† Smaller insects can sometimes escape from the trap. This is not a bad thing, as it spares the flytrap from going through a lot of digestive effort to obtain a meager snack.

‡ If you want to know more about action potentials, have at it. I lack the space and the qualifications to tackle such details here.