Lifeform of the week: Brain mushroom

The brain mushroom is that rare species with the distinction of being both edible and poisonous.

The mushroom Gyromitra esculenta goes by many aliases – false morel, turban fungus, elephant ears, and perhaps the most visually descriptive: brain mushroom. The species name “esculenta” comes from the Latin word for edible, but in its unprocessed form the fungus can be quite poisonous. Nevertheless it continues to be sought after by adventurous eaters and mushroom hunters. Adding to its outlaw mystique, the brain mushroom has been banned from public sale in Spain. But don’t despair, novelty-seekers, the fearsome fungus can be found easily enough in markets in northern and eastern Europe, as well as in forests on both sides of the Atlantic. 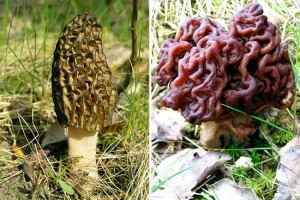 Gyromitra esculenta isn’t your typical supermarket mushroom. It lacks the familiar umbrella-shaped cap and gills (the ribbed part under the cap) that one sees in a Portobello or a Shiitake. Instead, the brain mushroom has a wrinkled cap reminiscent of the folds of a cerebral cortex. Like human skin, the mushroom becomes more wrinkly with age. Its lumpy exterior is sometimes confused with that of morels, a group of edible (and purportedly quite tasty) mushrooms from the genus Morchella.* But such a mistake only seems possible without the ability to compare the two organisms directly. The organized honeycombed ridges of the morel look nothing like the blob-like chaos of the brain mushroom. Nobody would incorrectly identify a brain mushroom as a “true” morel in a police line-up …though they could conceivably mistake it for a shar pei.

Brain mushrooms can be found in North America and Europe. They are especially numerous in Germany and Poland, accounting for the latter country’s lion’s share of mushroom poisonings during the post-WWII period. They tend to favor coniferous† forests and sandy soil. Mushroom season for this species is spring to summer, with the new world fungi (starting around March) beating the old world by a couple of months.

Why It’s Not a Plant

Because Gyromitra esculenta and its ilk can’t run away from you in the forest as would a deer or a fox, it’s tempting to refer to them as plants (in fact, they were once classified as such). However, fungi are a completely separate branch of life and are more closely related to animals than to plants. Fungi can’t make their own food via photosynthesis like plants do. And instead of building their cell walls from cellulose (another planty trait) they often employ chitin – a polysaccharide also found in the exoskeletons of insects and crustaceans. So please don’t call them plants. They hate that.

Can It Hurt You?

Brain mushrooms, like certain other members of their genus but even more so, contain an unstable and water-soluble chemical called gyromitrin. Once ingested, gyromitrin is quickly hydrolyzed‡ into methyl-formyl-hydrazine (MFH)§ and then to monomethyl-hydrazine (MMH), both of which are not only toxic but also easily absorbed by the body. Gyromitrin poisoning can cause gastrointestinal and neurological symptoms, including but not limited to vomiting and diarrhea, headache, fatigue, slurred speech, dizziness, tremor, and (though more rarely) coma and death. The symptoms don’t start for at least a couple of hours (sometime waiting a full day or two before kicking in) and, with the exception of severe cases, generally resolve in 2 to 6 days. Occasionally damage to the liver or kidneys can occur. Response to gyromitrin varies considerably amongst individuals, so outcomes of poisoning can be tricky to predict. Additionally, gyromitrin content within this species of mushroom varies, possibly due to environment factors.

Should You Eat It? 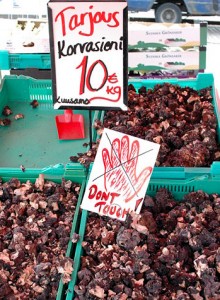 Under normal circumstances, the previous paragraph would already have answered this question (with a resounding “No!”), but once again the brain mushroom deviates from expectations in that it is regularly sold and consumed as food in some regions. Finland is fairly fond of the fungus; however, the government requires that specific cautionary labeling and preparation instructions accompany any brain mushrooms sold in public markets. How should you cook brain mushrooms? Very carefully. The best method appears to be boiling (and boiling and boiling …). Large amounts of water should be used (3 parts water to 1 part mushroom) and after each boiling, the mushrooms should be rinsed and the boiling water replaced with fresh water (since it now contains dissolved toxins). Each round of boiling (at least 2 are recommended) should last a minimum of 5 minutes, though 10 is preferable. Oh, and since the toxins produced from gyromitrin vaporize when boiled, this should all be done in a well-ventilated area and you should stay as far away from the pot as possible. Ideally, brain mushrooms would be prepared not in a kitchen but rather in a chemistry lab under the fume hood, with boiling water being discarded into one of those two jugs whose labeling system eludes me at present. 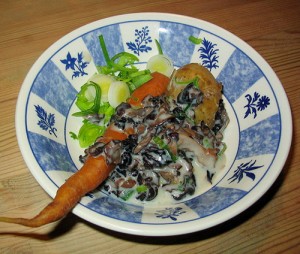 Perfect as an appetizer while you await for your pufferfish entrée. Image Credit: Ilmari Karonen.

After all that work, one would hope that brain mushrooms were the most amazing ambrosia ever to grace a plate. Sadly, the descriptions I encountered of their flavor were rather lacking in poetic adjectives. The best I could locate was the dubious compliment “mild-tasting” and the generic and unenlightening “delicious.” Anyone who has eaten these things and lived to tell the tale is encouraged to tell said tale in the comments section. Comparisons to more familiar foodstuffs would be especially appreciated.

* This similarity, of course, is the source of the common name “false morel.”

‡ Hydrolysis is a chemical reaction in which molecules are split with the help of water (H2O itself splits into H+ and OH– ions to accomplish this task).

§ Though not ideally suited for human consumption, MFH does have some useful industrial applications as a rocket propellant and a corrosion inhibitor.