Did life on land arrive far earlier than thought?

New clues from fossils from the oldest soils on Earth suggest that multicellular, land-dwelling organisms might have emerged much earlier than we thought. 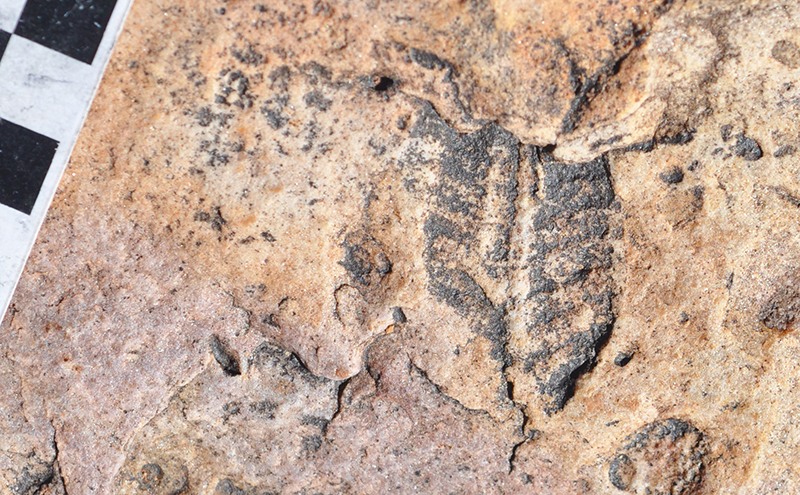 Fossil found in South Australia, dating to between 542 million to 635 million years ago, during a geologic period known as the Ediacaran. Image courtesy of Greg Retallack via University of Oregon.

A new analysis of fossils from Earth’s oldest soil suggests that multicellular, land-dwelling organisms possibly emerged much earlier than thought.

The study, published in the January 2019 issue of the journal Sedimentary Geology, looked at fossils previously considered to be ocean organisms. These fossils were found in sediments in South Australia that date to between 542 million to 635 million years ago – during a geological period known as the Ediacaran.

Greg Retallack, fossil collections director at the University of Oregon’s Museum of Natural and Cultural History, is the study lead author. He said in a statement:

These Ediacaran organisms are one of the enduring mysteries of the fossil record. Were they worms, sea jellies, sea pens, amoebae, algae? They are notoriously difficult to classify, but conventional wisdom has long held that they were marine organisms.

But new research – based on a geochemical and microscopic re-examination of the thin, silty-to-sandy layers of sediments where the fossils were found – suggests otherwise.

The sediments – known as interflag sandstone laminae – reveal telltale marks of ancient wind erosion, the researchers say, phenomena more closely associated with modern river banks than with oceans or seas. These thin, alternating layers, which are light in color and rich in fine grain sizes, appear similar to sheets of white paper between books bound in brown and red, Retallack noted.

Such wind-drifted layers are widespread on river levees and sandbars today.

The emergence of multicellular life on land dates to about 565 million years ago, although there is debate on whether Ediacaran fossils of that age originated from organisms in the sea or on land, Retallack said.

If the sediments themselves were deposited on dry land, it would follow that the organisms fossilized there were land dwellers, said Retallack. The organisms that left the fossils, he said, would have been from multicellular organisms visible with the naked eye. Such life would have preceded the emergence of green plant vegetation, which is believed to have started between 470 million and 583 million years ago.

While the Ediacaran organisms remain enigmatic when it comes to biological classification, the new study offers some important clues. Retallack said:

The investigation points to a terrestrial habitat for some of these organisms, and combined with growing evidence from studies of fossil soils and biological soil crust features, it suggests that they may have been land creatures such as lichens.

The researchers also re-examined well-known interflag sandstone laminae at four southern Indiana locations, which date to the Pennsylvanian period (roughly 323.2 to 298.9 million years ago), and a central Colorado site from the Eocene epoch (56 to 33.9 million years ago). Examination of these locations and of modern rivers showed the same sedimentary processes seen in Ediacaran rocks of South Australia and Africa.

Bottom line: Multicellular land-dwelling organisms possibly emerged much earlier than thought, according to a new analysis of fossils from Earth’s oldest soil.

Via University of Oregon