Latest snow on record for thousands of US locations

What’s the latest date that measurable snow has fallen in different parts of the United States? Check this interactive map from NOAA to find your record latest snow. 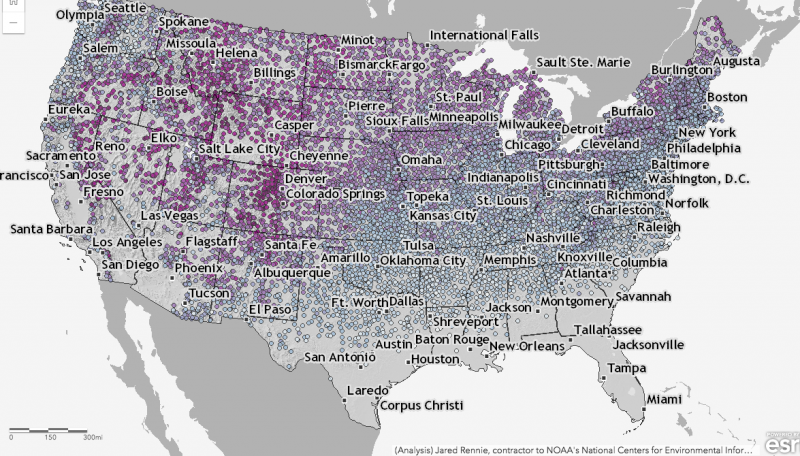 Snow doesn’t stop the moment that winter becomes spring on the calendar — a fact that those living in the northern U.S. plains know all too well right about now. Following on the heels of four nor’easters that buried parts of the U.S. east in March, the recent storm got us thinking: What is the latest date that measurable snow has fallen in different parts of the United States?

This interactive map shows the latest day for which measurable snow (accumulations of greater than 0.1 inches) was recorded for thousands of U.S. weather stations during their period of operation (up through April 11 of this year [2018].) Purple colors reflect latest-snowfall dates that occurred later in the year, while bluer shades reflect earlier dates for the last snow of the year. You can zoom in and click on any dot to find what the latest date of snow has been in your neighborhood based on weather stations nearby. 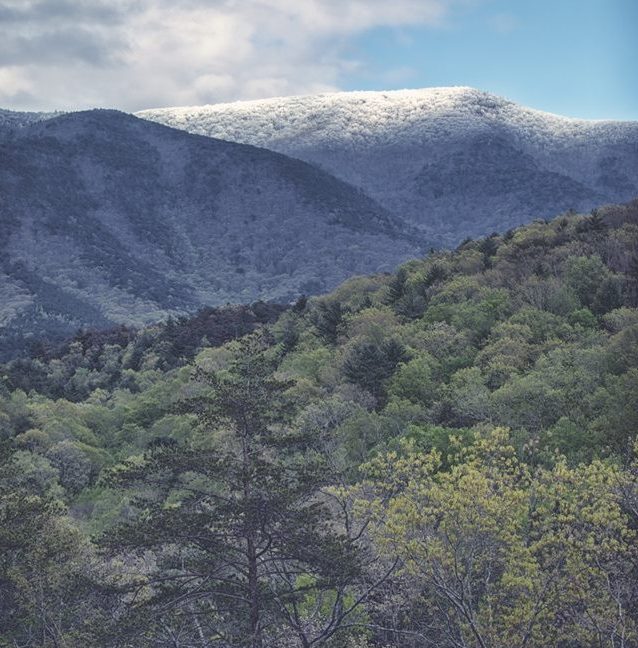 Scott Kuhn captured this image after a rare April snow in northern Georgia on April 16, 2018.

The data is from the Global Historical Climatology Network and has been subject to various quality controls to make sure that the data is both reasonable and complete. This can be a hard task when it comes to snow data, (read more in this Beyond the Data blog). Most stations shown in the map have at least 20 years of data. A few have a shorter history, but are otherwise of good quality (e.g., little to no missing data).

The spatial patterns shown in this map are similar to those seen in another snow-themed interactive map we produced, which looked at the earliest date of first snow. The dates of latest snowfall can reach into late June for regions along the U.S. Rockies and Mountain West, even stretching into the desert Southwest. Meanwhile, the latest snow for areas in the southeastern United States has come in March or early April.

A lot of this pattern can be attributed to features inherent in the geography of the United States. The higher the latitude and the higher the terrain, the later in the year the snow ends. Meanwhile, places farther south and closer to big bodies of water (like oceans) have experienced their latest date of snow fall on the earlier side – looking at you folks in the Southeast.

The interesting wrinkle is that the change in date of the latest final snow of the season does not follow a strictly east to west line across the country, even to the east of the Rockies, as it would if latitude were the only influence. Instead, it appears to occur on a diagonal across the Great Plains and into the Midwest. Why is that? Well, the answer lies both to the south (the Gulf of Mexico) and the north (Canada).

As the calendar moves into spring, warmer air from closer to tropics and over the Gulf of Mexico begins to moderate temperatures enough over the Southeast to make it difficult for temperatures to be cold enough for snow. Meanwhile, cold air that resides in the interior of Canada can still funnel south, bounded on one side by the Rocky Mountains, allowing for the occasional late spring snowfall, even as far south as higher elevations in New Mexico.

Bottom line: Interactive map showing the latest date that measurable snow has fallen in different parts of the United States.