Lake Mead – largest U.S. reservoir, as measured by water capacity – has reached a record low. Space images from 2016 and 1984 show its highs and lows. 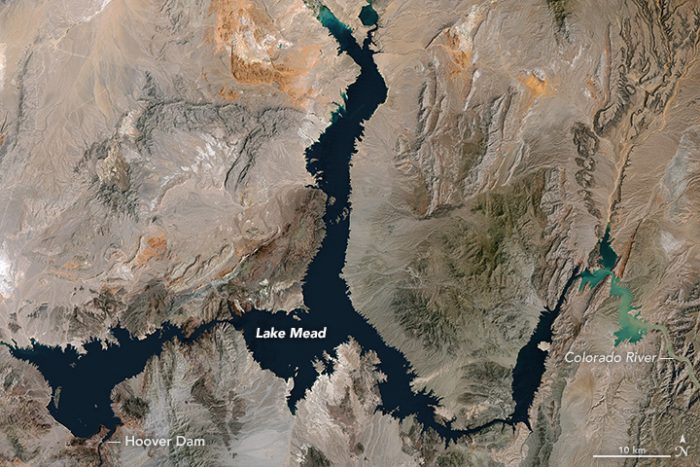 Landsat image of Lake Mead, acquired 1984, when the lake was most full.

In late May, 2016, Lake Mead – which helps supply water for 25 million people in Nevada, Arizona, and California — declined to its lowest level since the reservoir was filled in the 1930s. On May 27, NASA Earth Observatory published the two space images on this page of Lake Mead. They’re from a pair of Landsat satellites and show the lake near its highest and lowest points over the past 32 years. The Landsat 5 satellite acquired the top image on May 15, 1984. The lake last approached full capacity in the summer of 1983. Landsat 8 acquired the second image – below – on May 23, 2016. NASA explained:

The last time Lake Mead was this low—in 1937—water managers were still filling the reservoir and putting finishing touches on the Hoover Dam. According to data from the U.S. Bureau of Reclamation, the water level has now reached a record low for the second year in a row.

The lowest water levels each year are usually reached in late June or July, after water managers have released the yearly allotment of water for farmers and cities farther down the Colorado River watershed. That means water levels are likely to continue to fall in 2016 to roughly 1,070 feet (326 meters), according to the Bureau of Reclamation.

Lake Mead is the largest reservoir in the United States, measured by water capacity. It is on the Colorado River, about 24 miles (40 km) from the Las Vegas Strip, southeast of the city of Las Vegas, Nevada, in the states of Nevada and Arizona. 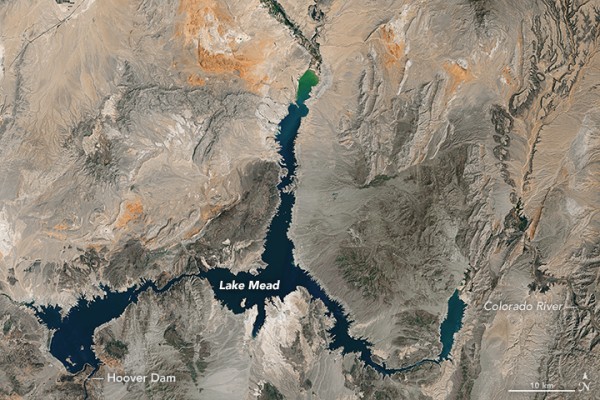 View larger. | Landsat image of Lake Mead, acquired 2016, when the lake reached a record low. Notice the white-tan “bathtub ring” around the edges of the water; this is exposed sand and minerals that would normally be under water.

At maximum capacity, the reservoir would hold 9.3 trillion gallons (36 trillion liters) of water, reaching an elevation 1,220 feet (372 meters) near the dam. Most of the water in this great reservoir comes from snowmelt in the Rocky Mountain range and travels through Lake Powell, the Grand Canyon, and into Lake Mead. Farmers and some cities in Arizona, Nevada, California, and northern Mexico all rely on water from Lake Mead.

According to the Bureau of Reclamation, the lake will be refilled enough by the end of 2016 to avoid cuts in water deliveries in 2017. Lake Mead National Recreation Area continues to operate water sports, sightseeing, and hiking facilities in the area, despite ongoing drought.

The Colorado Basin has endured roughly 16 years of drought and declining water levels in Lake Mead and Lake Powell. At the same time, populations continue to grow in the sun-drenched region. 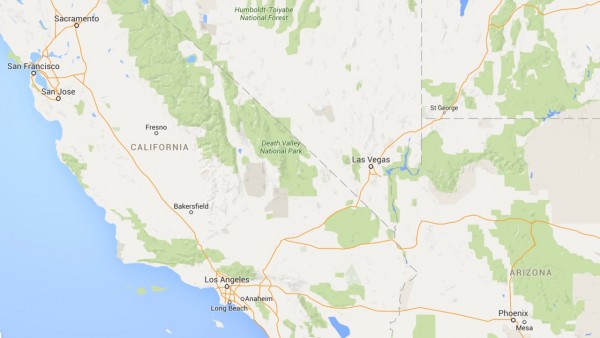 See Las Vegas toward the center of this map? Lake Mead is just to the right of it on the map, only 24 miles from the Las Vegas strip. Map via Google.

Bottom line: Lake Mead is the largest reservoir in the U.S., measured by water capacity. The lake has now reached a record low. Space images from 2016 and 1984 show the highs and lows of Lake Mead, which supplies water to millions in Nevada, Arizona and California.