I saw a cloud with rainbow colors. What causes it?

The term cloud iridescence – aka irisation – comes from Iris, the Greek personification of the rainbow. True iridescent clouds are relatively rare. Here’s what causes them. Ken Christison wrote on November 18, 2018: “We had some beautiful iridescence in the clouds late this afternoon. Seen from northeastern North Carolina.” Thank you, Ken!

Sky watchers often report seeing rainbow colors in clouds. There are various kinds of halos and colored arcs and even true rainbows you might see associated with clouds, but – if the rainbow-like colors are randomly distributed, and if the sun is nearby – what you’re seeing is likely an iridescent cloud.

The images on this page are mostly via the EarthSky community. Our thanks to all who contributed!

By the way, it’s easy to confuse circumhorizon arcs with iridescent clouds. Here’s how to tell the difference. Kino Obusan caught these iridescent clouds – one on the right and one on the left – on July 15, 2016, from Batangas, Philippines. “It was my first time to see a rare cloud phenomenon like this.” Thank you, Kino! Our friend Dave Walker in the UK caught another iridescent cloud in 2013. He wrote, “There’s been a lot of very high cloud recently, always a cue for me to look out for more atmospheric optics.” The best way to see an iridescent cloud is to place the sun itself behind some foreground object, a building or mountain, for example. Other aids are dark glasses, or observing the sky reflected in a convex mirror or in a pool of water. EarthSky Facebook friend Duke Marsh captured this image in 2012 in New Albany, Indiana. Charles Loyd wrote in 2014: “I was outside and my 9-year-old daughter looked up and asked why there was a rainbow in the clouds … “ 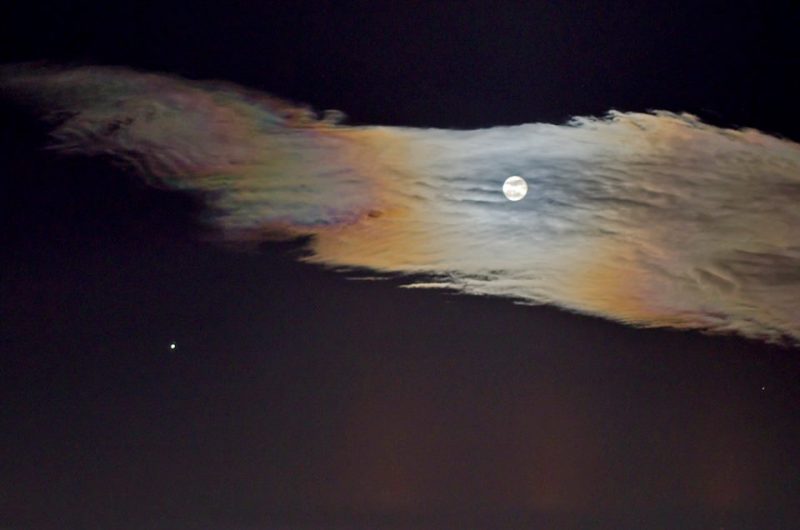 The moon with Jupiter and iridescent clouds, seen over Greece in 2015 by Nikolaus Pantazis. 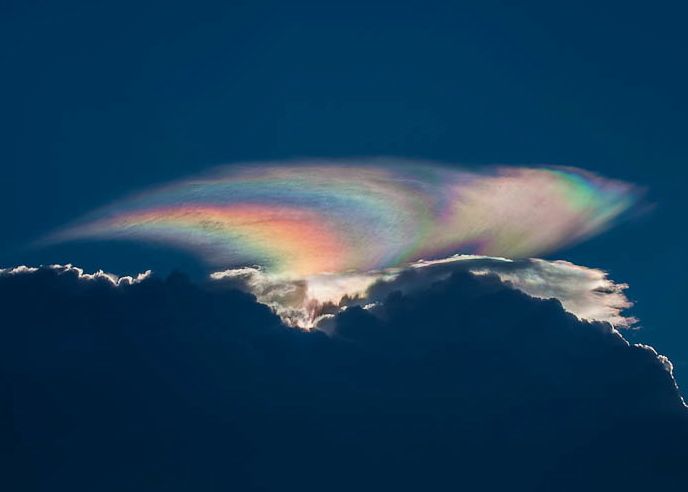 The colors in an iridescent cloud tend to be subtle and are usually pastel, but in some cases they can be vivid. Here is cloud iridescence captured by George Quiroga in Boynton Beach, Florida, in 2012. Image via Wikimedia Commons.

Bottom line: You might on occasion see a rainbow-like cloud. They’re fairly rare, but people do spot them, and we sometimes receive photos of them. They’re caused by the presence of very tiny ice crystals or water droplets in the air, which cause light to be diffracted (spread out).