Hurricane Carlotta is getting closer to the Pacific coast of Mexico and is gaining strength. All residents should be weather ready for this intensifying storm. 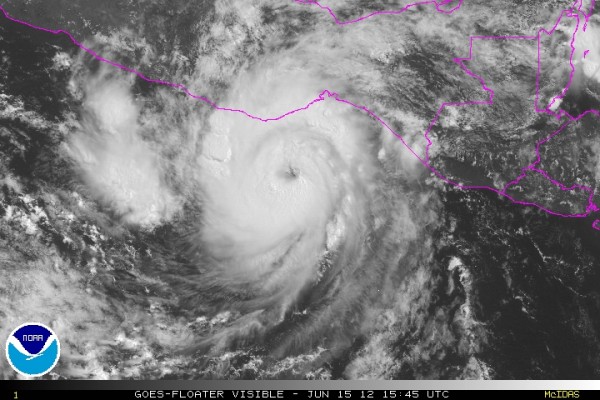 Hurricane Carlotta, the third named storm for the 2012 Eastern Pacific Hurricane Season, has formed and is threatening the coast of Mexico. Hurricane warnings have been issued for the Pacific coast of Mexico from Salina Cruz to Acapulco. Carlotta is a Category 1 hurricane with sustained winds of 85 miles per hour. Sea surface temperatures along the track of Carlotta are very warm with temperatures around 30°C (86°F). With light shear and warm sea surface temperatures, strengthening is likely to continue as it gets closer to the coast. All residents along the Pacific coast of Mexico east of Salina Cruz to Barra De Tonala and areas west of Acapulco to Tecpan De Galeana should monitor this situation as the storm inches closer to the coast. Carlotta will bring heavy rain and strong winds along the coast Friday evening and throughout Saturday, June 16, 2012.

The latest information on Hurricane Carlotta: 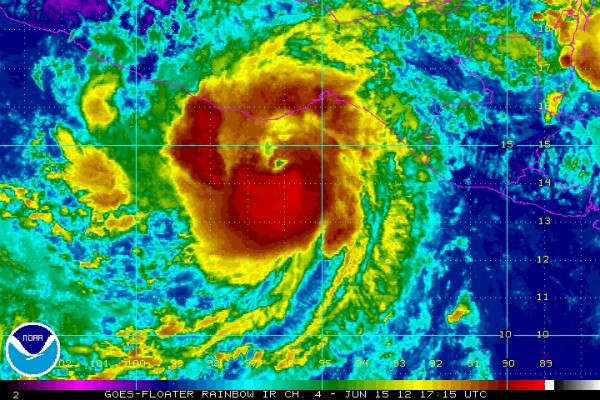 Hurricane Carlotta is expected to strengthen into a stronger hurricane in the next 24 to 36 hours. Intensity forecasts are still difficult for forecasters, but it appears as if all of the ingredients are together to allow intensification. The current forecast is for Carlotta to strengthen into a strong Category 2 hurricane with maximum sustained winds around 100 mph. The National Hurricane Center is giving Carlotta roughly a 5% chance of becoming a major hurricane, or a Category 3 storm with sustained winds over 110 mph. As of now, hurricane force winds (74 mph or greater) only extend outward up to 25 miles, which is along the center of the storm. For the most part, it is a small system with tropical force winds extending 90 miles from the center. Carlotta is expected to produce rainfall accumulations of 3 to 5 inches (75 to 125 MM) over the Mexican states of Chiapas, Guerrero, and northern Oaxaca. 6 to 10 inches (150 to 250 MM) are possible over southern Oaxaca and along the Guerrero coast, and some isolated areas could see as much as 12 to 15 inches (300 to 375 MM) along the Oaxaca coast. The biggest concern about Carlotta is flash flooding and mudslides across this region.

Here is the five day forecast track for Hurricane Carlotta. Flooding appears to be the biggest issue with this system. Image Credit: NHC

As of the 11 AM PDT update, Carlotta is 285 miles, or 460 kilometers southeast of Acapulco, Mexico. Carlotta is expected to “hug” the coast of Mexico, but never fully push into the country. Instead, it will move northwest along the coast. If the storm pushes further north than expected, then the mountainous terrain should greatly weaken the system. By Sunday, Carlotta is expected to weaken into a tropical storm, and will eventually stall out and loop around the same area and provide more heavy rain and flooding across the region thanks to an area of high pressure to the west that will prevent it from pushing out to the Pacific ocean.

Bottom line: Hurricane Carlotta is the third named storm for the 2012 Eastern Pacific hurricane season. Carlotta is still intensifying, and it could become a strong Category 2 hurricane with winds around 100 mph as it nears the coast of Mexico. Hurricane warnings have been issued along the Pacific coast of Mexico from Salina Cruz to Acapulco. The biggest threats from Carlotta will be flash flooding and mudslides across the region. Rainfall totals could easily exceed 5-10 inches in many areas. Everyone in and around the track of Carlotta should closely monitor this situation.