Humpback whales blow vertical columns of bubbles to herd and corral their prey.

Humpback whales often blow vertical columns of bubbles to herd and corral their prey, a behavior called bubble-net feeding. Marine biologist David Wiley of the National Oceanic and Atmospheric Administration (NOAA) and his team used digital suction cup tags (DTAGs) to measure depth, orientation and sound of humpback whales in the Gulf of Maine to provide the first depiction of the underwater behavior of humpback whales during bubble-net feeding. The study appears in the June 1, 2011 issue of Behaviour.

Humpback whales are baleen whales that often use bubble-net feeding to efficiently scoop up small fish and plankton in their filter-feeding mouths. While other baleen whales feed by swimming rapidly forward, humpbacks have large flukes (lobed end of the whale’s tail) relative to their size, providing greater thrust for the quick maneuvers that create bubble nets.

Wiley and his team used custom visualization software to analyze the precise swim path of the whales, when and where the whales blew bubbles, and the pattern of bubble blowing. In this way, the team was able to create three-dimensional images of whale swimming behavior and bubble release. 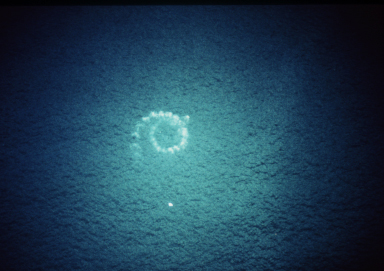 A spiral bubble net seen from above. Image Credit: NMFS/NOAA

The data showed that the whales released seltzer-sized bubbles while swimming in upward spirals and during a previously unknown behavior called double-loops. These consist of one upward spiral to corral the prey, a smack of the tail on the ocean surface — known as a lobtail — then a second upward lunge to capture the corralled prey.

The study also reports that humpback whales work in teams of at least two individuals and are not beyond robbing prey from the bubble nets set up by others.

Bottom line: David Wiley of the National Oceanic and Atmospheric Administration (NOAA) and his team used digital suction cup tags (DTAGs) to create 3D images of humpback whales in the Gulf of Maine to depict their behavior during bubble-net feeding. The study appears in the June 1, 2011 issue of Behaviour.