In a study of 65 cities across N. America – some humid and some dry – poor “convection efficiency” in humid cities made the urban heat island effect more intense.

Have you ever been in a hot city in the middle of summer then driven to the country where it is noticeably cooler? That extra heat in the city is what scientists refer to as the urban heat island effect. A new study published on July 9, 2014 in the journal Nature has found that humid cities across North America have worse urban heat islands than dry ones.

Scientists studied 65 cities across North America to see if the local climate played any role in the intensity of urban heat islands. Specifically, they calculated the urban to rural temperature differences during both the daytime and nighttime for the individual cities and looked to see if these values were in any way related to how wet these cities are. High temperature differences indicate the presence of an urban heat island. 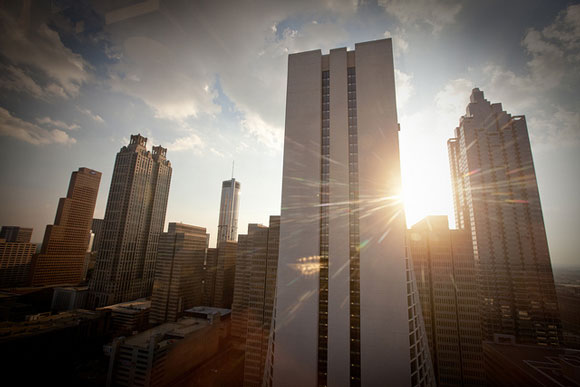 Atlanta, Georgia is a hot, humid city in the southeastern US. Image Credit: Ed Schipul.

At nighttime, they didn’t find any relationship between the urban heat island intensity and precipitation, but they did discover that daytime temperature differences were noticeable higher in cities that receive more rainfall. They think that this pattern may be due to the inability of humid cities to efficiently convect heat to the lower atmosphere.

Convection efficiency is one of several factors that may contribute to the development of an urban heat island. Other contributing factors include heat storage by building materials and pavement, heat generation by machinery, and reduced amounts of evaporative cooling in cities compared to rural areas because of less vegetation.

The poor convection efficiency in humid cities added about 3 degrees Celsius (5.4 degrees Fahrenheit) to the daytime temperature differences in urban versus rural areas. Such an effect was not observed for cities located in drier climates.

Scientists and city managers are actively seeking ways to reduce urban heat islands because the extra heat is bad for public health. Unfortunately, it would be really hard to boost the convection efficiency in humid cities—buildings would need to be made taller—so the scientists of the new study are recommending the next best thing, which is to install more light-colored roofs that can reflect sunlight and reduce the amount of heat that gets stored in a city during the summer.

Bottom line: A new study published on July 9, 2014 in the journal Nature has found that humid cities across North America have worse urban heat islands than dry ones. Cool roofs are probably the best technology option to reduce the impacts of urban heat islands, the scientists say.