How the octopus got its rings

It’s one of the more venomous creatures in the Pacific Ocean. The blue-ringed octopus has a unique way of changing its look.

Let’s have some fun with visualization. Imagine for a moment that you’re snorkeling in the exquisite cerulean waters off the coast of Australia, when you notice amidst the rocks a small octopus. It’s well camouflaged against its background, but, upon seeing you, the startled cephalopod’s body suddenly lights up in a brilliant pattern of blue rings.

Did I mention that in this hypothetical scenario, you’re the kind of person who recklessly pursues unknown species without considering the dangers? Well you are. So instead of recognizing what is obviously the octopus’s colorful warning display and backing off, you move in to get a closer look, at which point the panicked animal promptly bites your outstretched hand. Nice going, dummy. You’ve just been bitten by the blue-ringed octopus (Hapalochlaena lunulata) – one of the more venomous creatures in the Pacific Ocean. In a few minutes you’ll experience muscle paralysis, respiratory problems, and possibly death. You’ll want to find a doctor now. 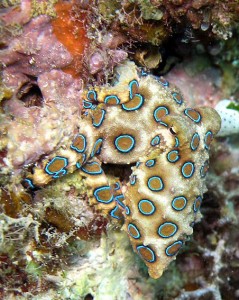 Don’t taunt these guys. They will mess you up. Image: Jens Petersen.

If this episode was occurring in real life, understanding how the octopus was able to flash those bright blue rings so quickly (a mere 1/3 of a second) would likely be low on your priority list. But here, in the safe glow of your computer or mobile device, aren’t you a little curious?

Well, thanks to a new study in The Journal of Experimental Biology, we now know how this animal accomplishes its signature costume change.

In general, cephalopods (octopus, squid, and their ilk) are a colorful lot, and many can change their appearance to blend with their surroundings, as well as for communication (e.g., “Get the hell out of my way, I’m highly venomous.”). This is accomplished with the aid of adjustable pigment sacs called chromatophores, and light reflectors called iridophores (as in “iridescent”). The luminous blue of this particular octopus’s rings is produced by iridophores.

Sparkly iridophores can be temporarily concealed by tweaking a layer of chromatophores above them. However, the blue-ringed octopus lacks the appropriately positioned chromatophores for this (already a sign that it’s a weirdo as far as cephalopods go).

In certain cephalopods, iridophores can be switched on and off directly by chemical signaling of neurotransmitters, which seemed a plausible explanation for the loopy blue light show. But when scientists tested a battery of such neurotransmitters on blue-ringed octopus skin samples, they observed no changes in the intensity of the iridescent rings. Despite the fact that they are somehow made invisible on the animals, the rings had no chemical “off” switch. They were always the same brilliant blue.

So if the rings can’t be dimmed chemically or modified by chromatophores, why aren’t they constantly visible? It turns out they’re shaded by folds of skin. By carefully examining the skin samples under different types of microscopes, the researchers found that each ring was tucked into a pouch of muscular skin. One set of muscle contractions allow the skin to conceal the blue rings, another set of contractions exposes them. Sort of like the strings that let you shut your blinds to block out the neon sign on the 24-hour deli across the street. (Pro tip: If possible, avoid putting your bed in the room facing the 24-hour deli.)

But while window blinds are pretty ubiquitous, skin shielding of iridophores is not. The blue-ringed octopus is the first cephalopod reported to employ this system. Though more could certainly be out there. The authors note that color change systems are known for only a fraction of the over 700 species of cephalopods living in the world’s oceans.

This study arrives just in time for International Cephalopod Awareness Days (ICAD). If you hadn’t heard of this event until now, it’s okay. You’re already doing a pretty good job celebrating it. You’re aware of the mechanism behind the blue-ringed octopus’s warning display. You’re aware that they exhibit this display when they feel threatened. And you’re aware that if you see the blue rings and you want to stay alive, it’s best to swim in the other direction. Happy ICAD!