How old is Earth’s inner core?

A new study suggests Earth’s inner core is only about 565 million years old – relatively young compared to the age of our 4.5-billion-year-old planet. 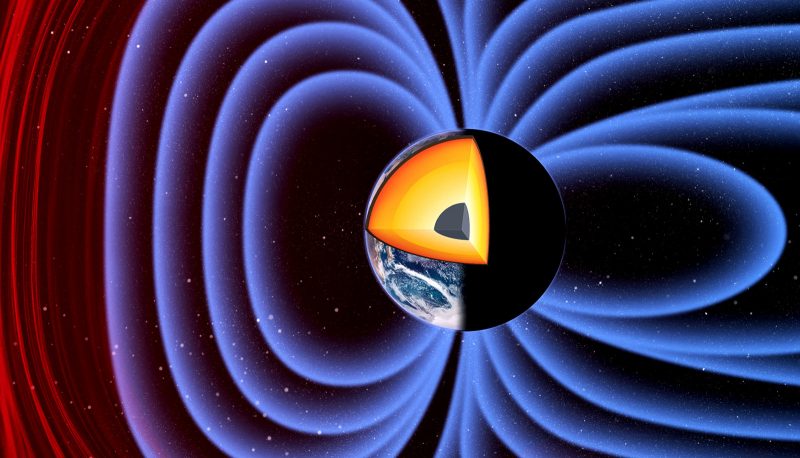 Image via University of Rochester/Michael Osadciw.

One enduring mystery about Earth is the age of its inner core – the solid ball that’s our planet’s innermost part.

Researchers have long believed that Earth’s core plays a vital role in generating the magnetic shield that protects our planet from harmful streams of radiation from the sun — and thus makes Earth habitable. They differ, however, on estimates of when the inner core actually formed. Now, new research, published January 28, 2019, in the peer-reviewed journal Nature Geosciences, says that Earth’s inner core is younger than scientists previously thought – only about 565 million years old — relatively young compared to the age of our 4.5-billion-year-old planet.

Scientists believe that Earth’s magnetic field is generated in its liquid iron core via a geodynamo — a process during which the kinetic energy of conducting moving fluids is converted to magnetic energy. Researchers believe a weak geodynamo — and a magnetic shield — formed fairly early in Earth’s history, shortly after the event that created Earth’s moon. For the next several billion years, the energy to drive the dynamo decreased until a critical point 565 million years ago, when, the researchers said, the dynamo was on the point of collapse.

Despite its drastically weakened state, however, the dynamo did not go away. The researchers conjecture it was at this point in the geological time scale – or sometime shortly after – that the inner core began to form, giving strength to the geodynamo.

John Tarduno, a professor and chair of earth and environmental sciences at Rochester, is a study co-author. He said in a statement:

This is a critical point in the evolution of the planet. The field did not collapse because the inner core started to grow and provided a new energy source for the formation of the geodynamo. 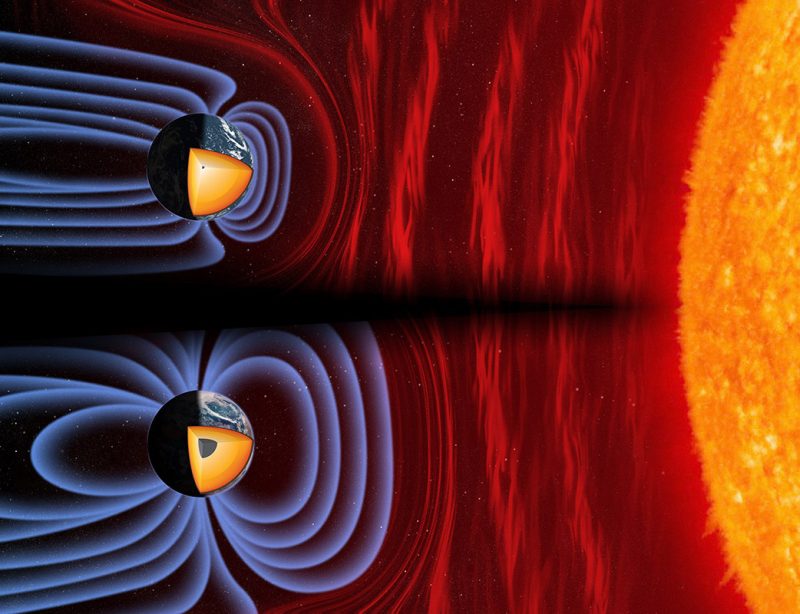 Inner core, then and now: Scientists think that Earth’s magnetic field is generated in its liquid iron core via a geodynamo – a mechanism within the Earth’s interior that continuously generates the geomagnetic field. Researchers believe a weak geodynamo — and a weak magnetic shield — formed early in Earth’s history, but decreased for the next several billion years until a critical point 565 million years ago (top image). The researchers conjecture it was at this point in the geological time scale that the inner core began to form, increasing the strength of the geodynamo and the magnetic field (bottom image). Illustration via University of Rochester/Michael Osadciw.

To learn about the evolution of the geodyamo, the researchers studied the magnetism locked in ancient crystals (a field known as paleomagnetism. ) Read more here about how the scientists did the study. They found that the intensity of the magnetic field was extremely low 565 million years ago, This indicates that the inner core may have formed around this time, said the researchers, to restore strength to the dynamo and, in turn, to the magnetic field.

Today, the geodynamo is powered by the growth of the inner core and is essential to the habitability of our planet, said Richard Bono, a post-doctoral researcher at the University of Liverpool and lead author of the study. He said:

Our magnetic field is part of what makes Earth a special planet, and, so far, the only one that has life. The evolution of Earth’s interior and the resulting geodynamo generated within plays a critical role in the preservation of life.

An improved understanding of this evolution of Earth’s interior may provide researchers key clues, not only for planet formation and habitability on Earth, but in the search for life on exoplanets that resemble Earth. Tarduno said:

Besides being a critical point in the evolution of Earth, 565 million years ago was also a critical time for the major diversification of life on Earth, Tarduno said.

This is a time of Ediacaran fauna, the first large complex organisms we see in the geologic record. These are a fundamental change from the microbial life preserved in older rocks.

Is there then some type of causal link between a stronger dynamo and a burst of life? Tarduno cautioned that there isn’t strong evidence of this correlation in the geological record. But, he said:

It’s true that if we have lower magnetic shielding, we’d have more harmful radiation coming in to Earth. That radiation might be harmful for DNA, for example, and there has been speculation that this could stimulate mutations.

Bottom line: New research on Earth’s inner core: When it formed and how it has changed.