How do dogs process words?

What’s happening in your dog’s brain when it hears you say squirrel? New research looks at how dog’s brains react to human words. 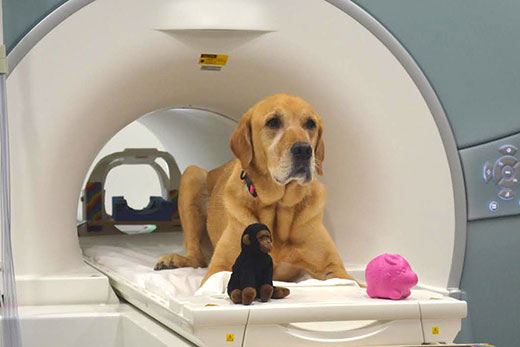 Eddie, one of the dogs that participated in the study, poses in the fMRI scanner with two of the toys used in the experiments, “Monkey” and “Piggy.” Image via Gregory Berns.

When your dog hears the word squirrel, it might perk up or even run to a window and look out. But, to your dog, does the word mean, “Something is happening?” Or does your dog picture a small, bushy-tailed rodent?

According to a new study, dogs have at least a rudimentary neural representation of meaning for words they’ve been taught and can differentiate words they’ve heard before from those they have not.

The study, published October 15, 2018, in the peer-reviewed journal Frontiers in Neuroscience, used brain imaging to probe how dogs process words they have been taught to associate with objects.

Ashley Prichard is a Ph.D. candidate in Emory University’s Department of Psychology and first author of the study. She said in a statement:

Many dog owners think that their dogs know what some words mean, but there really isn’t much scientific evidence to support that. We wanted to get data from the dogs themselves — not just owner reports.

Neuroscientist Gregory Berns is senior author of the study, and author of the bestselling book What it’s Like to be a Dog. Burns added:

We know that dogs have the capacity to process at least some aspects of human language since they can learn to follow verbal commands. Previous research, however, suggests dogs may rely on many other cues to follow a verbal command, such as gaze, gestures and even emotional expressions from their owners. 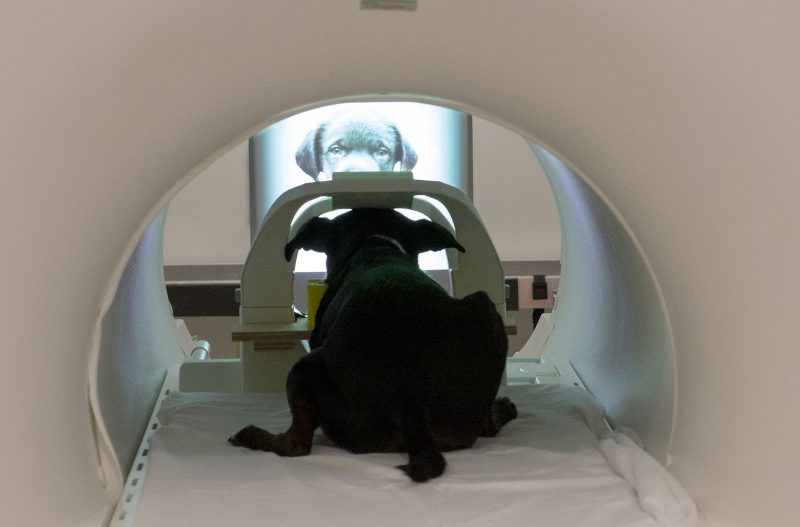 Berns is founder of the Dog Project, The project’s goal is to better understand the dog’s mind. It was the first to train dogs to voluntarily enter a functional magnetic resonance imaging (fMRI) scanner and remain motionless during scanning, without restraint or sedation. . Image via Gregory Burns.

The researchers focused on questions surrounding the brain mechanisms dogs use to differentiate between words, or even what constitutes a word to a dog.

For the current study, 12 dogs of varying breeds were trained to retrieve two different objects, based on the objects’ names. For the experiment, the trained dog lay in the fMRI scanner while the dog’s owner stood directly in front of the dog at the opening of the machine and said the names of the dog’s toys at set intervals, then showed the dog the corresponding toys.

Eddie, a golden retriever-Labrador mix, for instance, heard his owner say the words piggy or monkey, then his owner held up the matching toy. As a control, the owner then spoke gibberish words – such as bobbu and bodmick – then held up novel objects like a hat or a doll.

The results showed greater activation in auditory regions of the brain to the novel invented words compared to the trained words. Pritchard said:

We expected to see that dogs neurally discriminate between words that they know and words that they don’t. What’s surprising is that the result is opposite to that of research on humans — people typically show greater neural activation for known words than novel words.

The researchers hypothesize that the dogs may show greater neural activation to a new, unknown word because they sense their owners want them to understand what they are saying, and they are trying to do so. Berns said:

Dogs may have varying capacity and motivation for learning and understanding human words, but they appear to have a neural representation for the meaning of words they have been taught, beyond just a low-level Pavlovian response.