How coyote pups get used to humans

Across North America, coyotes are moving into urban environments. While human residents are having to get used to the new animal neighbors, coyotes are also habituating to people. 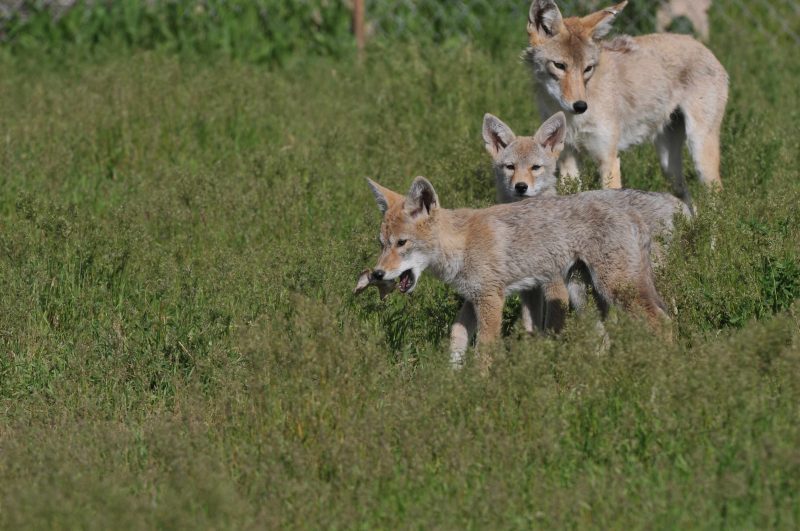 Seven-week-old coyote pups walk through the research facility in Utah as the mother follows. The first pup carries a bone in its mouth. Image via USDA National Wildlife Research Center/Steve Guymon.

As coyotes are moving into urban environments across North America, many human residents – whether they like it or not – are having to get used to them. Meanwhile, how are coyotes habituating to people?

A new study, published December 2018 in the peer-reviewed journal Ecology and Evolution, suggests that coyotes can habituate to humans quickly and that habituated parents pass this fearlessness on to their offspring.

Until the 20th century, coyotes lived mostly in the U.S. Great Plains. But when wolves were hunted almost to extinction in the early 1900s, coyotes lost their major predator, and their range began to expand.

With continuing landscape changes, coyotes are now increasingly making their way into suburban and urban environments — including New York City, Los Angeles and cities in the Pacific Northwest — where they live, mainly off rodents and small mammals, without fear of hunters.

The aim of the new study, was to understand how a skittish, rural coyote can sometimes transform into a bold, urban one — a shift that can exacerbate negative interactions among humans and coyotes. University of Washington biologist Christopher Schell is the first author of the study, Schell said in a statement:

A key factor, the researchers suggest, might be parental influence. Coyotes pair for life, and both parents contribute equally to raising the offspring. This may be because of the major parental investment required to raise coyote pups, and the evolutionary pressure to guard them from larger carnivores.

The new study observed eight coyote families at the U.S. Department of Agriculture’s Predator Research Facility in Utah during their first and second breeding seasons. These coyotes are raised in a fairly wild setting, with minimal human contact and food scattered across large enclosures. 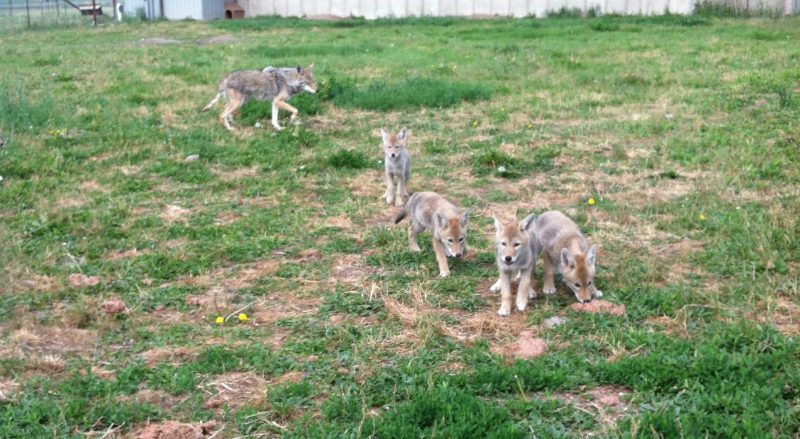 Five-week-old coyote pups eat food rations during the experiment. These second-litter pups were born in 2013 to more-experienced parents, and were more likely to approach a human. Image via USDA National Wildlife Research Center/Christopher Schell.

But during the experiment researchers occasionally placed all the food near the entrance of the enclosure and had a human researcher sit just outside, watching any approaching coyotes, from five weeks to 15 weeks after the birth of the litter. Then they documented how soon the coyotes would venture toward the food. Schell said:

For the first season, there were certain individuals that were bolder than others, but on the whole they were pretty wary, and their puppies followed. But when we came back and did the same experiment with the second litter, the adults would immediately eat the food – they wouldn’t even wait for us to leave the pen in some instances.

Parents became way more fearless, and in the second litter, so, too, were the puppies.

The discovery that this habituation happens in only two to three years has been corroborated, anecdotally, by evidence from wild sites across the nation. We found that parental effect plays a major role.

Even if it’s only 0.001 percent of the time, when a coyote threatens or attacks a person or a pet, it’s national news, and wildlife management gets called in. We want to understand the mechanisms that contribute to habituation and fearlessness, to prevent these situations from occurring.

Bottom line: A new study suggests coyotes puppies learn from their parents how to habituate to humans.