A new study, which used declassified images from spy satellites, shows that glaciers in the Himalayas melted twice as fast from 2000 to 2016 as they did from 1975 to 2000.

This article is republished with permission from GlacierHub. This post was written by Elza Bouhassira.

The Himalayas have a powerful impact on the lives of the people who live near them: They have cultural and religious sway, they play a role in determining regional weather patterns, and they feed major rivers like the Indus, the Ganges, and the Tsangpo-Brahmaputra that millions rely on for fresh water.

A new study published June 19, 2019, in the journal Science Advances by Ph.D. candidate Joshua Maurer of Columbia University’s Lamont-Doherty Earth Observatory concludes that glaciers in the Himalayas melted twice as quickly from 2000 to 2016 than they did from 1975 to 2000. Maurer said:

This is the clearest picture yet of how fast Himalayan glaciers are melting over this time interval, and why. 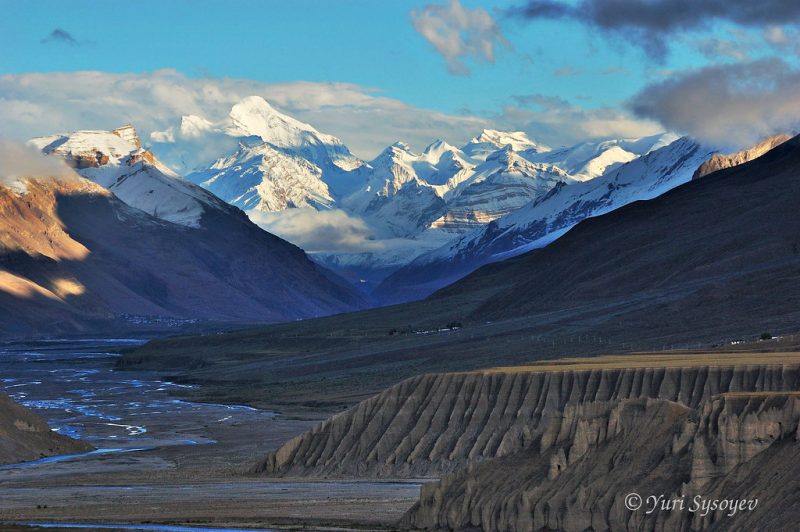 Spiti Valley, which means “The Middle Land,” is located in the northern Indian province of Himachal Pradesh in the Himalayas. Image via beagle17/Creative Commons.

Walter Immerzeel, a professor in the University of Utrecht’s department of geosciences, told GlacierHub that

… the novelty lies in the fact that they go back until 1975.

He said that scientists already knew “quite well” what the mass balance rates were for the last twenty years or so, but that looking further back and over a wider area provided interesting new information.

Maurer and his co-authors examined ice loss along a 1,200-mile (2,000-km) long transect of the Himalayas, from western India eastwards to Bhutan. The study area includes 650 of the largest glaciers in the Himalayas and confirms the results of previous studies conducted by researchers who looked at the rate of mass loss in the Himalayas.

The new study makes a major contribution by indicating that regional warming is responsible for the increase in melting. The researchers were able to determine this because mass loss rates were similar across subregions despite variations in other factors like air pollution and precipitation that can also accelerate melting.

Immerzeel agreed with the findings. He said:

It is mostly temperature change driving the mass balances. It can be locally enforced by black carbon or modulated by precipitation changes, but the main driving force is a rise in temperature. 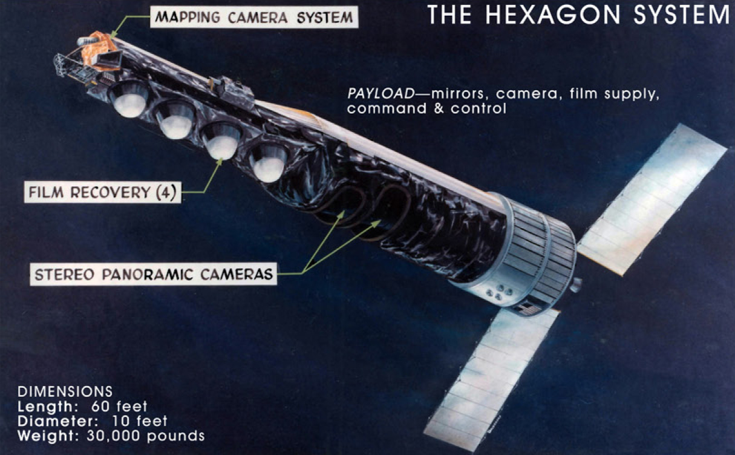 A diagram of a KH-9 Hexagon satellite that was used to create the images used in Maurer’s study. Image via National Reconnaissance Office.

The analysis was conducted using images from declassified KH-9 Hexagon spy satellites which were used by U.S. intelligence agencies during the Cold War. The satellites orbited Earth between 1973 and 1980, taking 29,000 images that were kept as government secrets until relatively recently when they were declassified, creating a cornucopia of data for researchers to comb through.

Maurer and his co-authors used the images to build models showing the size of the glaciers when the images were created. The historical models were then compared to more recent satellite images to determine the changes that occurred over time. Only glaciers for which data were available during both time periods were included in the study.

The new study received widespread media attention. National Geographic, CNN, the New Yorker, and The Guardian, among other major publications, highlighted the study’s conclusion that mass loss in Himalayan glaciers has doubled in the last forty years.

Tobias Bolch, a glaciologist at the University of St Andrews, told GlacierHub the findings should be approached with caution. He said:

The statement about the doubling of the mass loss after 2000 compared to the period 1975-2000 should be formulated with much more care.

[Scientists] need to be very careful presenting results about Himalayan glaciers and should communicate them correctly specifically after the IPCC AR4 error, and the wrong statement about the rapid disappearance of Himalayan glaciers.

Bloch is referring to an error that occurred in 2007, when the IPCC included in its Fourth Assessment Report an inaccurate statement predicting that all Himalayan glaciers would be gone by 2035. He said:

It is a promising data set, but due to its nature there are large data gaps which need to be filled which makes the data uncertain.

He added that there is “clear evidence” that mass loss has accelerated in the Himalayas. 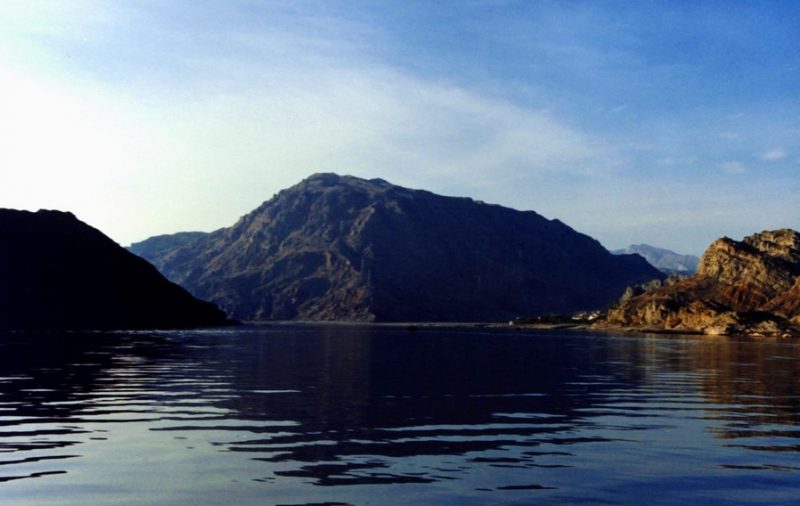 A stretch of the Indus River. Image via arsalank2/Creative Commons.

A recent report by the International Centre for Integrated Mountain Development, a regional intergovernmental organization in Nepal working on sustainable development in mountains, predicts that the Himalayas could lose 64 percent of their ice by the year 2100.

Maurer’s study examines only past melting from 1975 to 2016. ICIMOD’s study provides additional dimensions to Maurer’s results.

The large amount of melting that may occur in the coming decades would result in greater quantities of meltwater entering rivers. The Indus River, which millions rely on for drinking water and agriculture, receives about 40 percent of its flow from glacial melt. An increase in meltwater could augment the risk of flooding of the Indus and other rivers in the region.

Similarly, there may be a greater number of glacial outburst floods. Outburst floods occur when the moraine, or rock wall, which acts as a dam, collapses. A collapse can take place for various reasons including if a great deal of water accumulates in a lake from a phenomenon like an increase in glacial melting. Depending on the size of the lake and downstream populations, among other factors, these floods have the potential to cause substantial damage. The largest of these floods have killed thousands of people, swept away homes, and even registered on seismometers in Nepal. 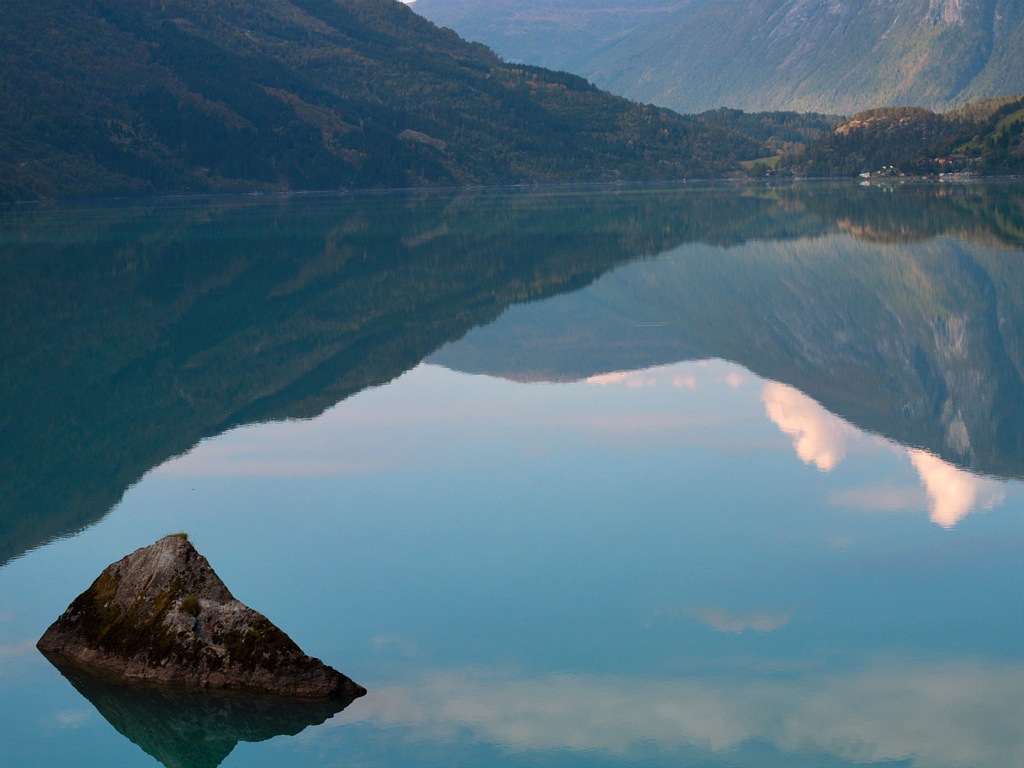 Reflections in a glacial lake in Norway. Image via Peter Nijenhuis/Flickr.

Once glaciers have lost substantial amounts of mass and no longer have large quantities of water to release, the reverse will begin to cause problems: Rivers dependent on Himalayan glacial melt will diminish and drought may become more common downstream. This will negatively affect farming and development in the Himalayan region.

In both the short and long term, according Maurer and his colleagues, glacier melt in the Himalayas will have significant impacts on the livelihoods of those dependent on its towering peaks.