At False Bay, South Africa, great white sharks are infamous for their dramatic attacks on fur seals. They propel from the ocean depths towards their prey at such great speed that they breach the ocean surface, often with a seal clamped between rows of teeth in their enormous mouth. But the seals aren’t the only source of food for the sharks. Scientists have uncovered new evidence that scavenging on dead whales is a little-known but significant food source for great whites. A team led by Chris Fallows of Apex Expeditions at Cape Town, South Africa reported these findings in April 2013 in the journal PLOS ONE.

Fallows and his team reported detailed extended observations of four whale scavenging events by great whites at False Bay. Some of the sharks were individuals known to the research team, either from color-coded tags attached during previous studies, or from unique body markings. 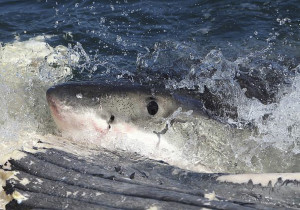 Typically, the sharks approached a dead whale slowly, swimming around it and mouthing it at different parts of the carcass. Feeding usually started at the extreme rear body and tail of the whale, then proceeded to blubber-rich sections of the carcass. The sharks sank their teeth into the whale, tearing out flesh by shaking their heads from side to side. In one extraordinary instance, a 4 meter-long (13 foot) shark entered inside the carcass of a Bryde’s whale, extracting and eating a near-term fetus.

The sharks often regurgitated large pieces of blubber, then returned to the carcass to continue feeding. They did this, the scientists speculated, to replace what they had earlier consumed with more nutritious energy-packed blubber. A shark could continue feeding for over 6 hours, until it reached a point where it could eat no more. As if intoxicated, the sharks could not lift their heads above the water, while half-heartedly nudging and mouthing the carcass, seeming too weak to bite and tear at the flesh. Eventually, they would give up, floating to the depths. 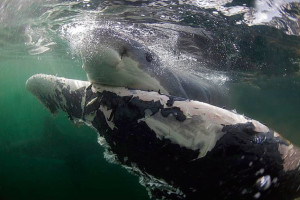 Meanwhile, the seals were catching a break. When a whale carcass was present in waters off Seal Island, the rate of seal predation by great whites dropped significantly as the sharks were otherwise distracted.

While feeding on a dead whale, great white sharks did not display any aggression, even when there were as many as eight of them simultaneously tearing into the carcass, often bumping into each other. They did, however, display a social hierarchy, with the largest sharks getting the choicest blubbery parts of the whale. Smaller great whites, 3 to 4 meters (9.8 to 13 feet) long, lingered back, not daring to feed with the big guys, instead, grabbing pieces of drifting blubber. 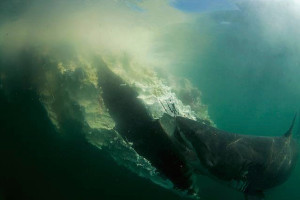 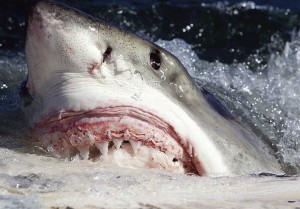 Great white sharks that occupy the waters off Seal Island, that prey on fur seals, are generally about 3.5 meters (11.5 feet) in length, 4 meters (13 feet) at most.

The scientists believe that sharks longer than 4 meters are absent around Seal Island because the amount of effort expended in catching the agile seals exceed the nutrient payoff. Yet, large sharks, as much as 5 meters (16.4 feet), were showing up to feed on the whale carcass. Where were these larger sharks coming from?

It appears that large great white sharks that outgrew the waters around Seal Island didn’t go very far. They are likely off the coast of the Western Cape, feeding on dead or weak cetaceans that migrate through those waters. Sharks have an excellent sense of smell, and could have picked up the odors from whale carcasses in Cape False. In fact, the team found there were more sharks feeding on a carcass when the wind was blowing the scent trail out to sea, drawing the sharks into Cape False.

Seal Island, at the foot of False Bay, is home to about 60,000 Cape fur seals. Each winter, between May and September, adult white sharks patrol the waters off the island, preying on seals during their foraging expeditions at sea. Observations of the sharks feeding on carcasses at Cape False in South Africa suggest that sharks too large to go after resident Cape fur seals could be patrolling coastal waters off the Western Cape, preying on weakened whales and feeding on dead whales.

Thus our understanding of great white sharks’ feeding habits may be misled by the sharks’ well-known predatory ferocity. Scavenging of whale carcasses by great white sharks, while rarely observed, may be happening more frequently than previously thought.

Bottom line: New research shows that great white sharks scavenge on dead whales for food. A team led by Chris Fallows of Apex Expeditions at Cape Town, South Africa reported these findings in April 2013 in the journal PLOS ONE.