Will large parts of Earth be too hot for people in 50 years?

Inhospitably hot regions on Earth occupy about 0.8% of the globe now. New research indicates that – if greenhouse gas emissions continue unabated – these regions may expand to something more like 19% by 2070. 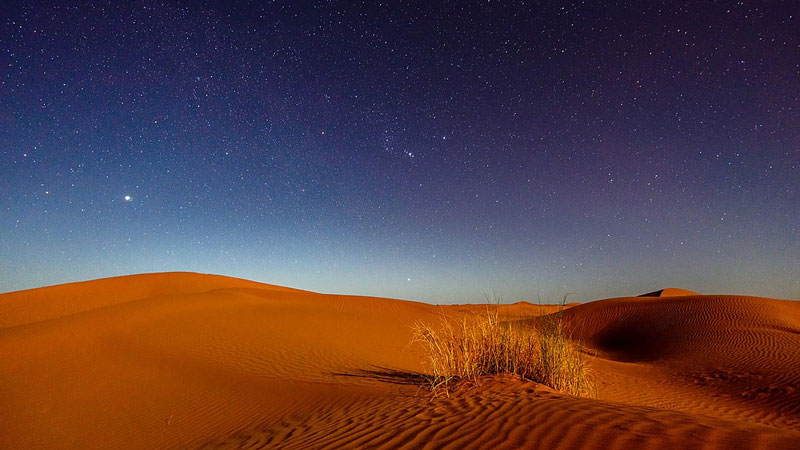 A moonlit night – and stars – above the Sahara Desert in northern Africa. Image via Sergey Pesterev/ Wikimedia Commons.

If greenhouse gas emissions continue unabated, land temperatures will rise so substantially that large areas of Earth will become inhabitable. That’s according to new research by an international team of scientists, published May 26, 2020, in the peer-reviewed journal Proceedings of the National Academy of Sciences.

For several thousands of years, human societies have prospered on lands with hospitable climates, within what scientists call our climate niche. According to the new research, the majority of people have lived within areas where the annual average temperature ranges from 52-59 degrees Fahrenheit (11-15 degrees Celsius), while fewer have inhabited lands with temperatures ranging from 68-77 degrees F (20-25 degrees C). For comparison, the Sahara Desert, one of the hottest regions around the world, has an annual average temperature of 86 degrees F (30 degrees C). Large areas of the Sahara are considered uninhabitable because of the hot and dry conditions, although a few nomadic tribes do live in the desert today.

According to the new research, 50 years from now, if greenhouse gas emissions continue unabated and as Earth’s land surface continues to warm, the area of uninhabitable land will expand drastically. Specifically, these scientists estimate that – without emission reductions – a 13.5 degrees F (7.5 degrees C) rise in mean-human experienced temperatures can be expected by 2070. The global temperature (land plus water vs. only land) will only rise a bit a more than 5.4 degrees F (3 degrees C) by this time because water does not warm as much as land.

Correspondingly, according to this new research, the area of Earth’s land surface occupied by inhospitably hot temperatures greater than 84 degrees F (29 degrees C) on average can be expected to rise from a current level of 0.8% today to 19% in 2070.

Map showing the projected expansion in area of inhospitably hot lands caused by climate change. The small black areas represent the land with an average annual temperature of greater than 84 degrees Fahrenheit (29 degrees Celsius) at the present time. The large shaded areas represent the potential extent of such lands in 2070, according to the new research. This map was featured in the May 26, 2020, publication Future of the human climate niche. Image via Wageningen University.

By 2070, this large expansion in uninhabitable land could affect 30% of the projected human population. While some form of adaptation could occur in terms of new cooling technologies for homes, factors such as crop growth, livestock health, and water availability would all contribute to constraints on the livability of these super warm regions. Thus, the pressure for people to migrate would be very high, though the scientists caution that the complexity of migration makes such trends difficult to predict.

Lead author Chi Xu of Nanjing University commented on the findings in a statement:

We were frankly blown away by our own initial results. As our findings were so striking, we took an extra year to carefully check all assumptions and computations. We also decided to publish all data and computer codes for transparency and to facilitate follow-up work by others. The results are as important to China as they are to any other nation. Clearly we will need a global approach to safeguard our children against the potentially enormous social tensions the projected change could invoke.

As sobering as the new findings are, there is still a chance that we can avoid this bleak future by reducing greenhouse gas emissions. Tim Lenton, climate specialist at the University of Exeter and co-author of the paper, said:

The good news is that these impacts can be greatly reduced if humanity succeeds in curbing global warming. Our computations show that each degree warming above present levels corresponds to roughly one billion people falling outside of the climate niche. It is important that we can now express the benefits of curbing greenhouse gas emissions in something more human than just monetary terms.

Bottom line: New research by an international team of scientists indicates that inhospitably hot regions on Earth may expand from a current level of 0.8% to 19% by 2070 if greenhouse gas emissions continue unabated.