In this post, tropical cyclones now and last month, plus an outlook on the near future. Could a hurricane impact your area next week? Find out here!

In the Northern Hemisphere in this month of August 2012, the tropics are brewing. The past few weeks have shown activity in the western Pacific Ocean, but in the eastern Pacific and the Atlantic, tropical activity has been more or less nonexistent. However, the tropics are brewing across the globe right now. In this post, we’ll catch you up with the storms that have formed and passed, storms currently out there, and an outlook of what could develop in the near future. Could a hurricane impact your area next week? Find out here! 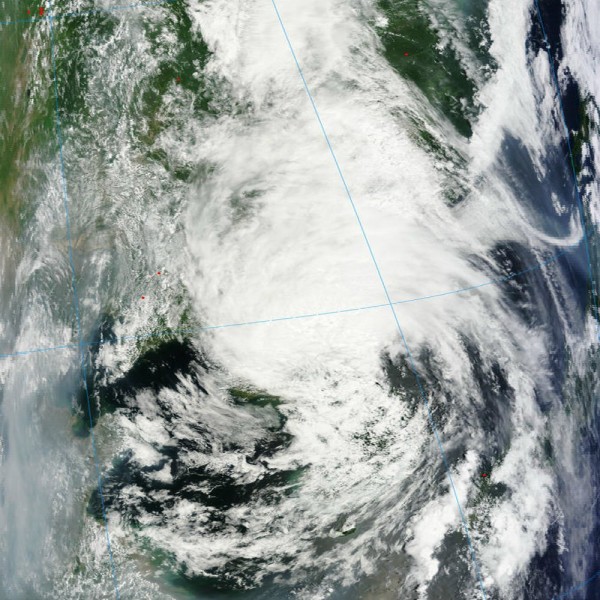 Tropical Storm Khanun developed on July 16, 2012 and was approaching South Korea. Khanun never developed into a full blown typhoon as it encountered a lot of terrain, but it was a potent rainmaker across South Korea and North Korea. It pushed into South Korea on July 19, 2012, and eventually weakened and dissipated as it traveled over North Korea. The biggest impact from Khanun was that it left nearly 63,000 people homeless. Heavy rains caused about 4,800 hectares (11,861 acres) of cropland to be washed away, and nearly 92 kilometers (57 miles) of roads were damaged or destroyed across the region. The hardest hit area, according to Korean Central News Agency, was the Sinyang and Songchon counties of South Phyongan Province. As of today, at least 88 people have died in North Korea from the heavy rains in the region. North Korea has the tendency to downplay events, information, and damage across the region when storms hit. With that said, I wonder if residents were prepared for this system.

One of the biggest mysteries when it comes to understanding tropical cyclones is forecasting intensity levels. Most of the time, forecasting the track of a tropical cyclone can be proven to be somewhat accurate. With Typhoon Vicente, intensity of the storm was the biggest story line as it rapidly strengthened from a Category 1 to a Category 4 storm in only six hours according to Jeff Masters of Weather Underground. The storm pushed ashore on Monday, July 23, 2012 and made landfall near Macao, China. Although this storm intensified quickly right before it made landfall, the Chinese were prepared. According to the International Business Times, Vicente is responsible for three deaths in the region as it pushed ashore. 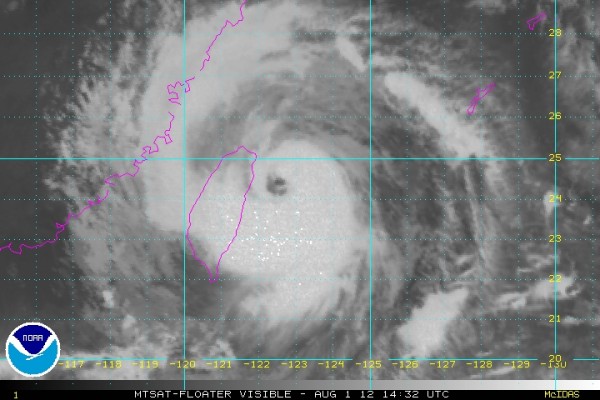 As of now, there are two systems in the Western Pacific that are being watched. Typhoon Saola will likely push into parts of northern Taiwan as a strong typhoon around a Category 2 strength with winds being estimated around 95 knots. Of course, intensity forecasts are never set in stone, which is something Typhoon Vicente proved. As of this morning, Saola is a Category 2 storm with sustain winds around 90 knots, or roughly 105 miles per hour. Meanwhile, Tropical Storm Damrey was upgraded to a typhoon with sustain winds of 75 mph and will push near southern Japan and eventually into China, possibly making landfall just north of Shanghai. Damrey is a very tiny cyclone, especially compared to the size of Saola. Damrey is expected to travel over cooler waters, and will likely weaken slightly. The tropics will remain active in the region, and more systems will likely fire up within the next two weeks based on the latest model runs.

Forecast tracks for Typhoon Saola and Damrey. Both storms will likely push into China within the next few days. Image Credit: Joint Typhoon Warning Center 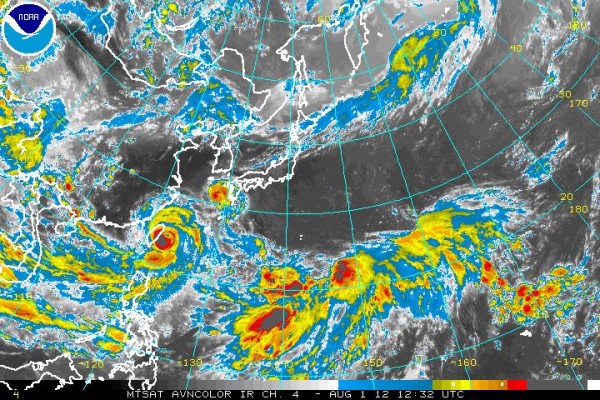 Infrared imagery for the Northwest Pacific showing Typhoons Saola and Damrey. Both storms are expected to push into China. Image Credit: NOAA 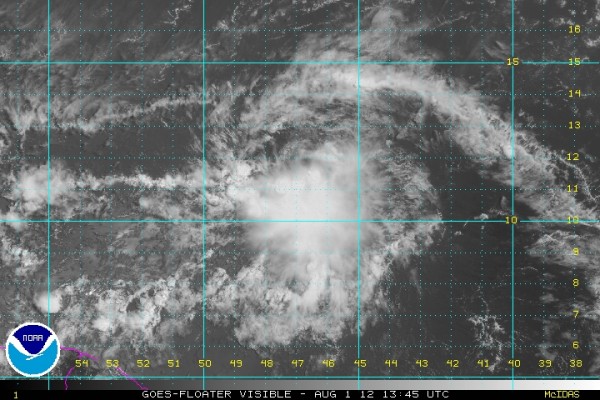 Visible satellite imagery of 99L, or the disturbance in the middle of the Atlantic Ocean. NHC gives this system a high chance to become a tropical depression within the next 48 hours. Image Credit: NOAA/NHC

Relatively speaking, the tropics were extremely quiet across the Atlantic Ocean for the month of July 2012. In fact, July 2012 recorded zero named storms. The last time we saw zero named storms for the month of July was back in 2009. However, the tropics are heating up as all eyes are watching an area of low pressure developing between the Lesser Antilles and Africa. As of now, the National Hurricane Center gives this system a 60% chance (high) of developing into a tropical depression within the next 24 to 48 hours. If the storm sustains 39 mph or higher, it will be named “Ernesto”. Models are not very aggressive with this system, and not showing any significant strengthening in the near future. Wind shear (In this case, vertical movement of wind) is expected to increase as the system pushes into the Caribbean. Remember, wind shear weakens tropical cyclones. As of now, I fully expect this system to become Ernesto by Thursday or Friday morning and the system should continue to push to the west-northwest. I doubt this system will develop into a hurricane, but as mentioned previously in this post, intensity forecasts can be extremely tricky. Once this storm develops into a full tropical cyclone, the models will have a better handle of how this system will evolve. Until then, the NHC will continue to monitor this system. Residents living near the Lesser Antilles, Cuba, Dominican Republic, and Puerto Rico should monitor this system as it evolves. The weaker the system, the more likely it will stay in lower latitudes and move more westward versus moving to the northwest.

As of now, there has been a lull in the activity across the eastern Pacific Ocean. The last storm to form was Hurricane Fabio, which peaked in intensity at 105 mph. Since mid July, tropical activity has been quiet across the basin. For now, the most reliable weather models are not indicating development across the region within the next three to five days.

Bottom line: Tropical activity is picking up across the Western Pacific and Atlantic basins. Typhoon Saola and Typhoon Damrey will eventually push into parts of China. Damrey will likely weaken as it pushes across cooler ocean waters. Meanwhile, Saola will likely maintain Category 2 status as it pushes to the northwest. Meanwhile, in the Atlantic basin, all eyes are on the system developing between the Lesser Antilles and Africa. The NHC gives this system a high chance (60%) to become a tropical depression within the next 24 to 48 hours. This system will likely become “Ernesto” by Thursday or Friday. As of now, “Ernesto” looks to be the main area of focus across the Atlantic basin for the upcoming week. The peak of the Atlantic hurricane season is getting closer, so I fully expect tropical activity to ramp up as we push into late August and early September.