Giant quake may lurk under Bangladesh

A huge earthquake could be building beneath Bangladesh, Earth’s most densely populated nation. There’s potential for some 140 million people to be affected.

Scientists at Columbia University’s Lamont-Doherty Earth Observatory said on June 11, 2016 that Bangladesh, the most densely populated nation on Earth, might be the site of a giant earthquake, which may now be building. They said there’s new evidence of increasing strain there, in a region where two tectonic plates underlie the world’s largest river delta. They estimate that at least 140 million people in the region could be affected by this massive quake, if it occurs. The damage would come not only from the direct results of shaking, but also:

… from changes in the courses of great rivers, and in the level of land already perilously close to sea level.

The scientist said they are not forecasting an imminent great earthquake, but say it is an “underappreciated hazard.” 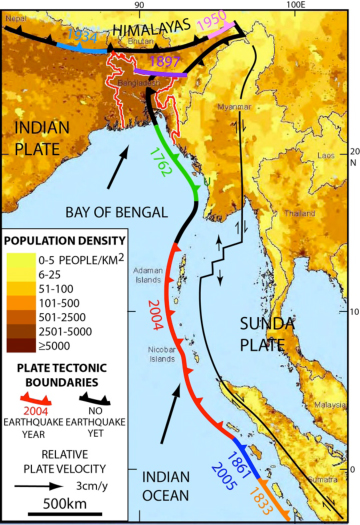 Bangladesh, Myanmar and eastern India (all near top) are bisected by an extension of the tectonic boundary that ruptured under the Indian Ocean in 2004, killing some 230,000 people. Known quakes along the boundary’s southern end are shown in different colors; the black sections nearer the top have not ruptured in historic times, but new research suggests they might. Image via Michael Steckler/ Lamont-Doherty Earth Observatory.

Michael Steckler, a geophysicist at Columbia University’s Lamont-Doherty Earth Observatory, who led a recent study of this area said:

Some of us have long suspected this hazard, but we didn’t have the data and a model.

Now we have the data and a model, and we can estimate the size.

He said strain between the plates has been building for at least 400 years–the span of reliable historical records, which lack reports of any mega-quake. When an inevitable release comes, the shaking is likely to be larger than 8.2, and could reach a magnitude of 9, similar to the largest known modern quakes. Stickler said: 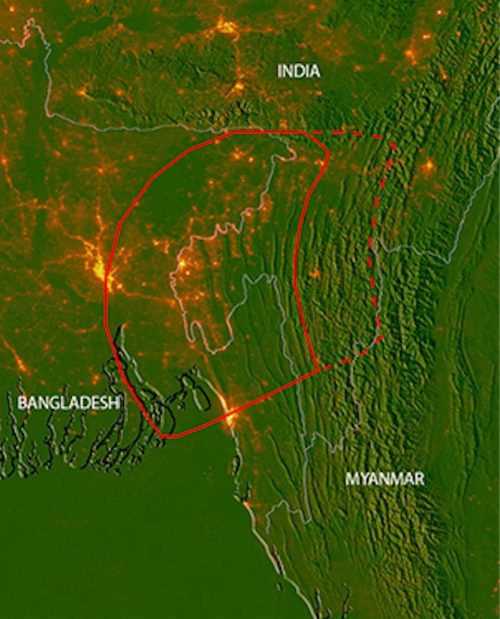 Potential quake zone. Solid red line indicates an area of about 24,000 square miles that could move during a subduction-zone earthquake, affecting 140 million people or more. Dashed line represents a scenario in which the slip might take place along a separate fault. Image via Chris Small/ Lamont-Doherty Earth Observatory.

Bottom line: A huge earthquake could be building beneath Bangladesh, according to scientists at Columbia University’s Lamont-Doherty Earth Observatory. Some 140 million people could be affected.