A giant iceberg, about twice the size of Chicago, broke off from Antartica’s Brunt Ice Shelf in late February 2021.

Satellite images show the iceberg breaking free and moving away rapidly from the floating ice shelf. Image via ESA.

A giant iceberg, about twice the size of Chicago, broke off from the northern section of Antarctica’s Brunt Ice Shelf last Friday (February 26, 2021).

The new berg – informally dubbed ‘A-74’ – spans about 490 square miles (1,270 square km). That’s a large iceberg, but Antarctica is known for churning out some enormous bergs. For example, iceberg A-68 was almost five times bigger when it calved from the Larsen C Ice Shelf in 2017. 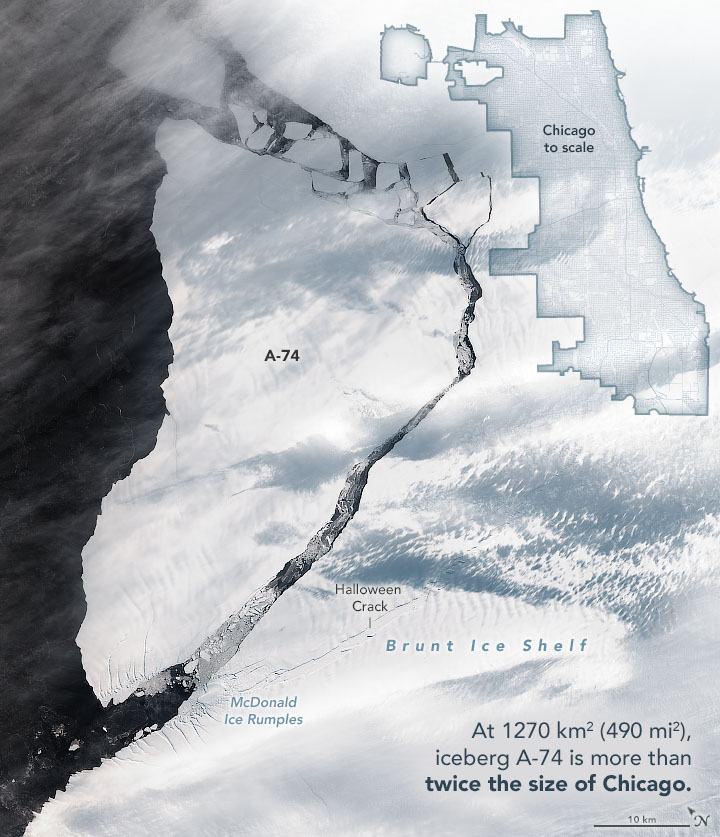 The break was first detected by GPS equipment on February 26, 2021, and then confirmed the next day with radar images from the European Space Agency’s Sentinel-1A satellite. On March 1, clouds were sparse enough for the cameras on NASA’s Landsat 8 satellite to acquire this natural-color image of the new iceberg. Image via NASA Earth Observatory.

Glaciologists have been closely monitoring the many cracks and chasms in the Brunt Ice Shelf for the past two years, after rifts opened rapidly across the ice and raised concerns about the shelf’s stability. ESA’s Mark Drinkwater said in a statement:

Although the calving of the new berg was expected and forecasted some weeks ago, watching such remote events unfold is still captivating. Over the following weeks and months, the iceberg could be entrained in the swift south-westerly flowing coastal current, run aground or cause further damage by bumping into the southern Brunt Ice Shelf. So we will be carefully monitoring the situation.

According to a report from NASA’s Earth Observatory, A-74 broke from the ice shelf northeast of the McDonald Ice Rumples, an area where the flow of ice is impeded by an underwater formation that causes pressure waves, crevasses, and rifts to form at the surface. The rift that spawned the new berg appeared near the rumples in satellite images in September 2019, and it advanced across the ice shelf with remarkable speed during the Southern Hemisphere summer of 2020-2021.

I would not have thought that this rift could go zipping across the northeast side of the Brunt Ice Shelf and cause a significant calving, all in a tiny fraction of the time it has taken Chasm 1 to extend toward the ice rumples from the south.

Chasm 1 is a separate rift located south of the ice rumples and the Halloween Crack. After decades of growth and then a rapid acceleration in 2019, that rift appeared poised to spawn its own iceberg, NASA said, prompting safety concerns for researchers “upstream” at the British Antarctic Survey’s Halley VI Research Station. This section of the shelf is still holding on, but when it eventually breaks the berg will likely measure about 660 square miles (1,700 square km).

It remains to be seen what will become of the new iceberg. Scientists say that, most likely, it will eventually get caught up in the Weddell Gyre, similar to the fate of A-68. But first it needs to be pushed offshore, and to date it does not appear to have moved very far.

Bottom line: A giant iceberg, about twice the size of Chicago, broke off from Antarctica’s Brunt Ice Shelf in February 2021.